2, 4-Dichlorobenzyl Alcohol (DCBA) Market Information: by Application (Preservative, Insecticide, Chemical Intermediate, and Others), by End Use Industry (Pharmaceutical, Agriculture, Cosmetics & Personal Care, General Industry, and Others), and by Region- Forecast till 2030

2, 4-Dichlorobenzyl Alcohol (CAS no. 1777-82-8) is considered as a mild antiseptic and they can also kill bacteria and viruses associated with throat and mouth infections. It has a wide utilization scope as a preservative, insecticide, chemical intermediate, and others in numerous end use industries such as agriculture, pharmaceutical, cosmetics & personal care, general industry among others. Moreover, broad range of fungicide and insecticide utilize DCBA owing to its excellent antimicrobial property.

As per our analysis, some of the important market factors and trends identified in the Global 2, 4-Dichlorobenzyl Alcohol Market include increasing incidence of chronic disease, technological advancement in active pharmaceutical ingredients (API) manufacturing, and growing urbanization. Increasing usage in agricultural activities coupled with the rising demand for superior class of crop production is predicted to drive market growth during the forecast period. Increase in the consumption of insecticide owing to increasing awareness among farmers related to effects of insecticide on crop yield is estimated to fuel the growth of the market. Moreover, changing lifestyle, increasing consciousness related to personal hygiene and growing purchasing power of consumers for cosmetics & personal care products in developed and developing countries are predicted to propel the growth of DCBA market during the assessment period. However, stringent regulatory framework regarding the limiting content of 2, 4-Dichlorobenzyl Alcohol in cosmetics & personal care is expected to hamper the demand for DCBA over the forecast period. 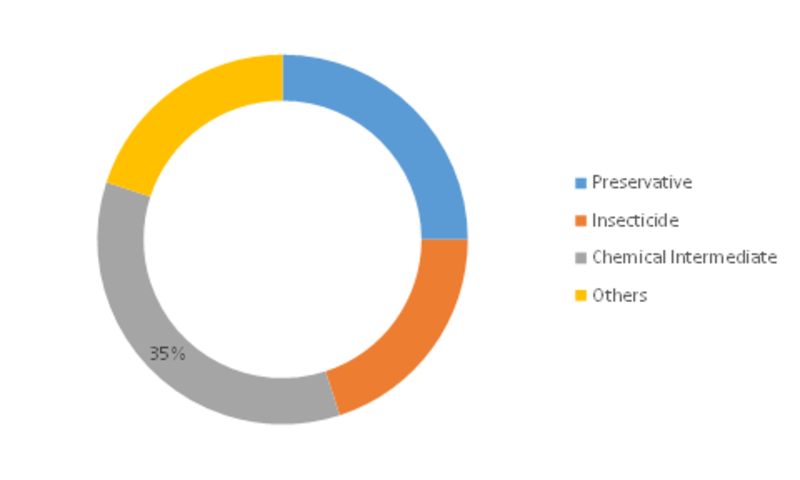 The Global 2, 4-Dichlorobenzyl Alcohol Market consists of five regions: Asia Pacific, Europe, Latin America, North America, and the Middle East & Africa. Asia Pacific region is estimated to grow at the highest CAGR during the review period on account of expansion of various end use industries such as agriculture, cosmetics & personal care, and general industry among others. The demand for DCBA is predicted to surge in numerous countries of Asia Pacific such as China, India, Japan, Vietnam, and Malaysia owing to increasing consumer base as well as favorable government regulations. Furthermore, increasing purchasing power, availability of low cost raw material, labor & land, and soberly stringent regulatory framework are some of the important factors for the regional DCBA market growth over the forecast period.

North America emerged as the largest market for 2, 4-Dichlorobenzyl Alcohol followed by Europe and Asia Pacific. North America is expected to witness a significant growth in 2, 4-dichlorobenzyl alcohol market due to the strong base for industrial sector coupled with rising investments to revitalize general industry over the forecast period. North American countries such as the U.S. and Canada are among the key contributors to the regional DCBA market growth and are expected to see a significant regional market growth. The U.S accounted for the largest regional market share and is predicted to grow with a healthy CAGR owing to the growth in pharmaceutical sector. In Europe, countries such as Russia, Germany, France, Italy, and the UK have emerged as a prominent consumer market due to developed end use industries and rising expenditure on research and development, and innovation. However, stringent regulation implemented by REACH and EPA are expected to slightly hamper the growth of market in the Europe and North America. Latin American countries such as Mexico, Brazil, and Colombia are also estimated to witness moderate growth owing to the increasing consumer spending on cosmetics products along with the presence of luxury brands associated with cosmetics & personal care products. The Middle East & Africa is predicted to witness a significant growth during the forecast period 2017-2023. Qatar, Oman, Saudi Arabia, and the United Arab Emirates (UAE) are among the major contributors in the regional market growth and is expected to positively influence the industrial growth over the forecast period. Furthermore, the upcoming FIFA world cup in Qatar is expected to boost the sales for cosmetic & personal care products.