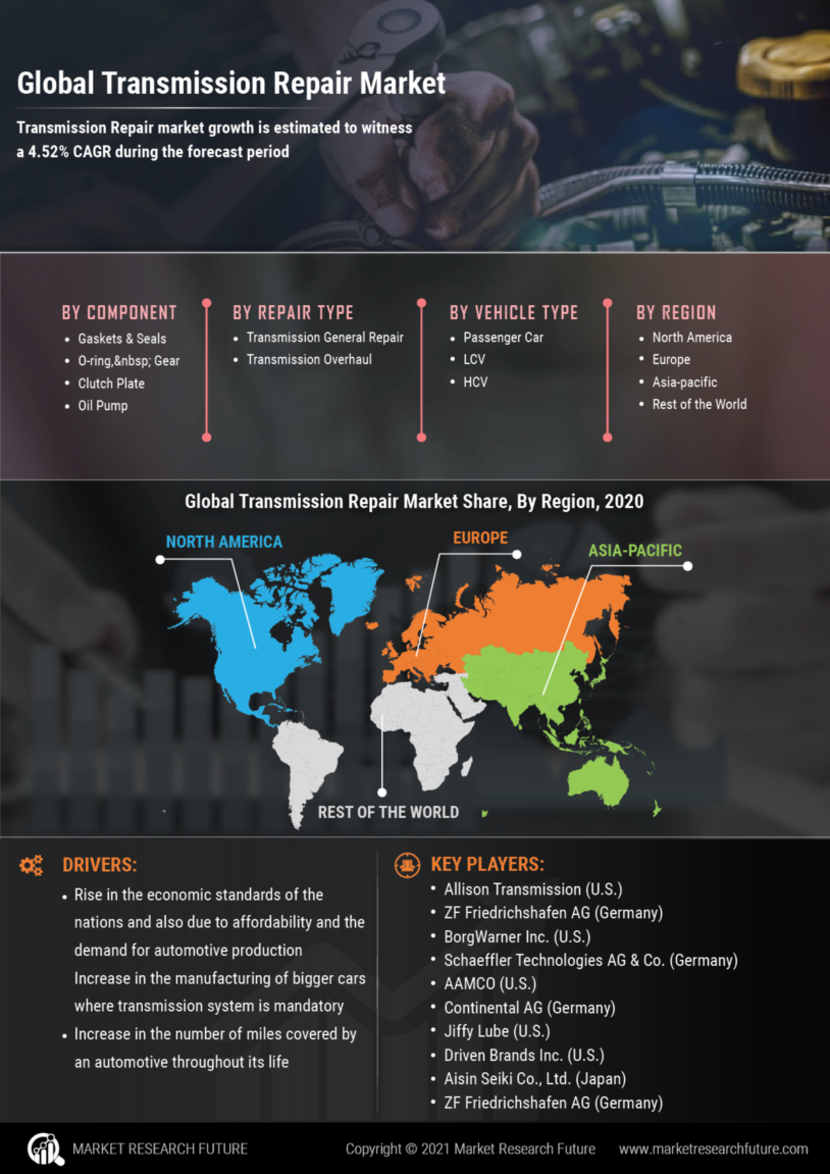 This report contains all the information on the global transmission repair market growth and the market strengths. The report also contains the culmination of dynamics, segmentation, key players, regional analysis, and other important factors. And a detailed analysis of the global transmission repair market and forecast to 2027 is also included in the report.

The transmission is an important part of the car which helps to converts the combustion power of the engine to momentum which helps to drive the wheels. Transmissions are used for converting torque and rotations in all kinds of motorized vehicles, aircraft, and vessels.

According to the ongoing researches, the covid 19 pandemics has affected the global transmission industry and it is likely to leave an impact on the growth of the industry during the forecast period. Then pandemic has changed the behavior of the consumers and their demands along with that the purchasing patterns, current market dynamics, re-routing of the supply chain, and the constant changing intentions of the government, all these are the major factor contributing to the downfall of the global transmission repair market.

The key strategies of the market players include the launches of new technologies, R&D activities, and acquisitions. The transmission repair market analysis is predicted to dominate the major companies in the market such as Allison Transmission, ZF, BorgWarner, and others. The key players are focused on their capabilities and the opportunities for the future growth of the market. They are likely to adopt the successive favorable mergers during the forecast period.

With the rise in the economic standards of the nations and also due to affordability and the demand for automotive production has remarkably increased in the past few years. According to reports by OICA, the production of commercial vehicles increased by 2% in the year 2019 as compared to the year 2018.


The significantly rising in the developments of electronic cars due to the rise in the demand for electric vehicles among the population is set to hamper the growth of the global transmission repair market industry during the forecast period. Electric vehicles almost smashed the maintenance industry due to their features and high efficiency.

According to the reports, Volkswagen has publicized the augmentation of the manufacturing plant for the electric vehicles with a huge investment of $800 Million in the United States, in the year 2019.

From 2015 to 2019, the demand for passenger cars in china witnessed tremendous growth of more than 10%. The key players of these regions are expected to add fuel to the demand for the used vehicle segments in this region which is ultimately boosting the demand for the global transmission repair market trends here.

The rise in the adoption of the timely maintenance of the vehicles to increase the life cycle dominates the global transmission repair market in the year 2019. The timely maintenance of the vehicles increases the fuel efficiency of the cars, hence the adoption of the general transmission repair is likely to boost the growth of the market.

The growing sales of passenger cars along with that the increase in the standard vehicle miles traveled in the developing countries of the world such as India, Brazil, Mexico, Russia, and China are predicted to drive the growth of the global transmission repair market in the vehicle segment.


Based on the application, the market is segmented into transmission general repair and transmission overhaul.

On the other hand, the Asia pacific segment is expected to witness tremendous growth with the highest CAGR due to the development of the automobile industries in these regions. The rise in the concerns for the environment in developing countries like Japan and China is increasing the demand for transmission repair in these regions.

The used vehicle segment has increased rapidly due to the advancement in the technologies and the high usage of the more developed equipment of the vehicles which is ultimately increasing the demand for the transmission repair market.

At what CAGR is the global transmission repair market projected to grow in the forecast period (2020-2027)?

Global transmission repair market is projected to grow at approximately 4.5% CAGR during the assessment period (2020-2027).

What are the major tailwinds pushing the growth of the global transmission repair market?

The increasing adoption of the timely maintenance of the vehicles by owners with the objective of keeping the transmissions at fuel efficiency are the major factors driving the growth of the global transmission repair market.

What are the major growth impeders for the global transmission repair market?

Risk of hot transmission fluids is one of the major growth impeders for the global transmission repair market.

Which region holds the largest share in the global transmission repair market?

Who are the top players in the global transmission repair market?

Transmission Repair Market Is Expected To Showcase Rampant Growth Over 2027