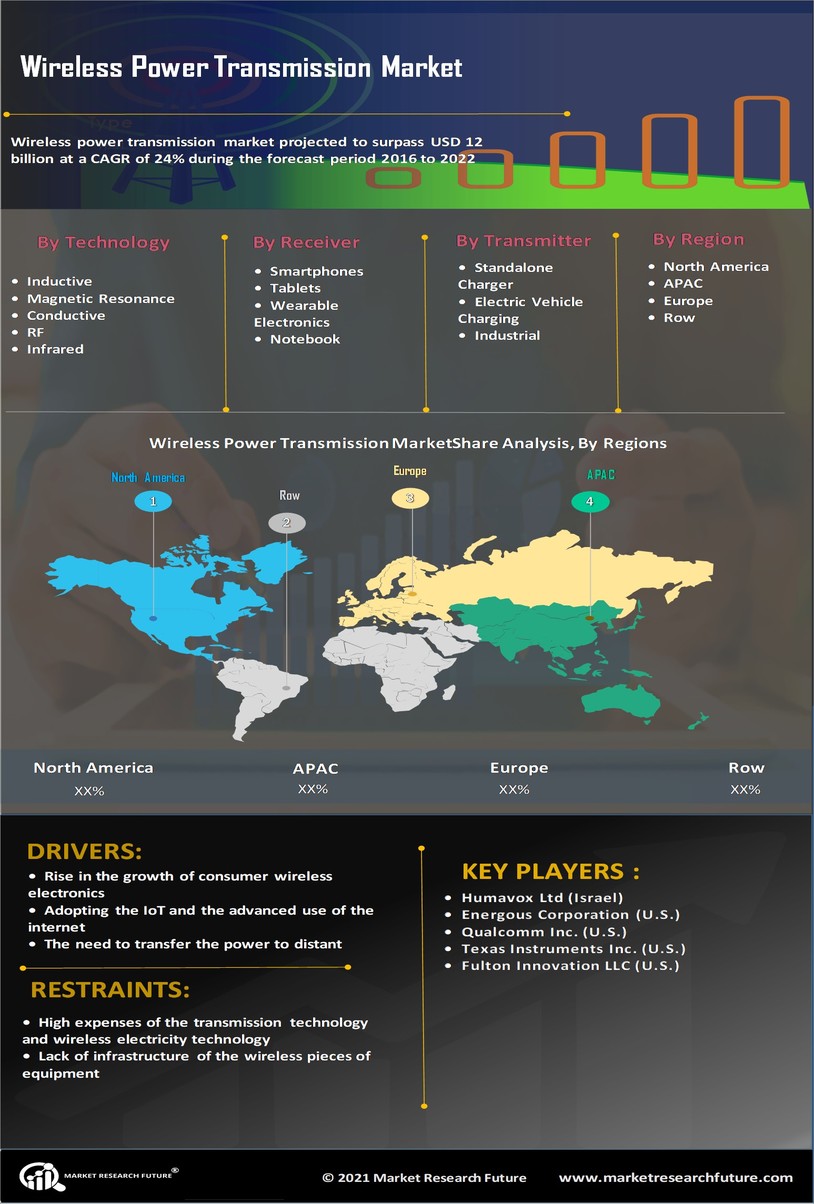 The power source transmits electromagnetic energy to an electric load with no wires in a system; that process is known as wireless power transmission. The wireless communication transmits power to remote locations. It carries a great demand in consumer electronics, such as tablets, laptops, smartphones, and other devices. A large wireless transmission market share area comes under the North American region. It is predicted to prosper at an exponential CAGR of 20.40% during the estimated period from 2022 to 2030. The market valuation worldwide is composed to reach USD 28.9 Billion by the end of 2030, but in the European region, some places tend to grow faster in the estimated period of 2022-2030.

The outbreak of covid-19 has negatively impacted the wireless transmission market worldwide. The production facilities of semiconductors and electronics have been stopped due to the unavailability of labour and strict regulation of government globally. Covid has caused a significant drop in production and bans on transportation; due to strict rules, labour was not allowed to work in factories, and the shutdown of industries are the factors that have decreased the growth of the wireless transmission market in 2020.

Advanced technology has helped in the robust development of the market. The outbreak of COVID has had a negative impact on the economic conditions of the wireless power transmission market throughout the world. The launching of labor-savings techniques was hindered. Regular complaints were marked in consumer demand and more change in consumer behavior was marked. Wireless power of low battery conditions along with low security and non-ability was marked. The out team of the pandemic has helped to increase the demand for using more of the latest wireless technology. To fulfill the needs and demands, the government took safety steps for the production of the equipment and devices.


The most challenging factor is the growth of the market for the user’s electronics wireless devices. But it has been marked that wireless technology has faced certain limitations. This limitation acts as a major drawback to the manufacturers. The devices being less efficient and less safe are very much harmful to the environment. The most challenging factor is the initiative taken by the wireless power transmission companies which launch certain wireless products.


The continuously developing supply chain has given insights into the wireless power transmission market players. Experts have the technological framework and have evaluated the supply chain frameworks. This supply chain makes you confident and helps in building different business strategies to succeed in a competitive advantage.

North America holds the largest and dominant part of the world. The North American region covers a large area of the long-range wireless power transmission market and its projects at a high percentage of the market during the forecast period. Some of the European regions grow at high speed during the forecast period of 2022-2030. This was the early region where the use of technology and power transmission was implemented. Some of the markets in Europe have taken the fabrics and some of the wireless contracts. Regionally, it has been marked that the United States is covering a large area due to it investing a huge sum for technology. The installation of a wireless power transmitter and receiver is carried out at a very cheap rate.

Energous Corporation, a leading developer of RF-based wireless power networks, has announced its 1W power bridge transmitter technology, which has received approval from the Ministry of Industry and information technology in China.

The report gives a piece of holistic information about the market. It also analyzes the key segments are done in the market, the market trends that have a great impact on wireless electricity technology and wireless power transmission technology. It signifies the market players operating in the market who play a substantial role in fulfilling the needs. It provides in-depth analysis about the value chain analysis and gives information about the growth opportunities of the market. It gives details about the current as well as the future outlook of the wireless power transmission market scenario.

What are the growth prospects in the wireless industry?

The wireless market is expected to grow at a CAGR of 20.40% in the forecast period of 2022-2030. Malaysia and Indonesia owe major portions in growth. The wireless power transmission industry has grown from USD 2.5 billion in 2022 to USD 28.9 Billion by 2030.

What is the stimulus that increases the size of the market?

The demand for the use of wireless connectivity motivates marketing dynamics. This technology has a widespread impact on commercialization. It is an available offering for personal communication and is also used for fast exchange of im\nformatio in an emergency. It is also used in remote areas where satellite communication is used. It is vitally used in video communication and for real-time text messaging. In business, sectors it is used to keep track of the company’s traveling activities. Bluetooth is a wireless usage where the exchange of data can be done. In the traveling industry, GPS is helpful to find an efficient route.

What is the progress aspect of the industry?

A significant range of progress is shown depending on the functional category and in the case of energy technology depending on the technical approach of the industry. The progress rates have exceeded for various fields. An income level of USD 28.9 Billion has to be used by 2030.

Who are the competitors in the wireless market?

What are the regions guiding the fruition of the wireless industry?