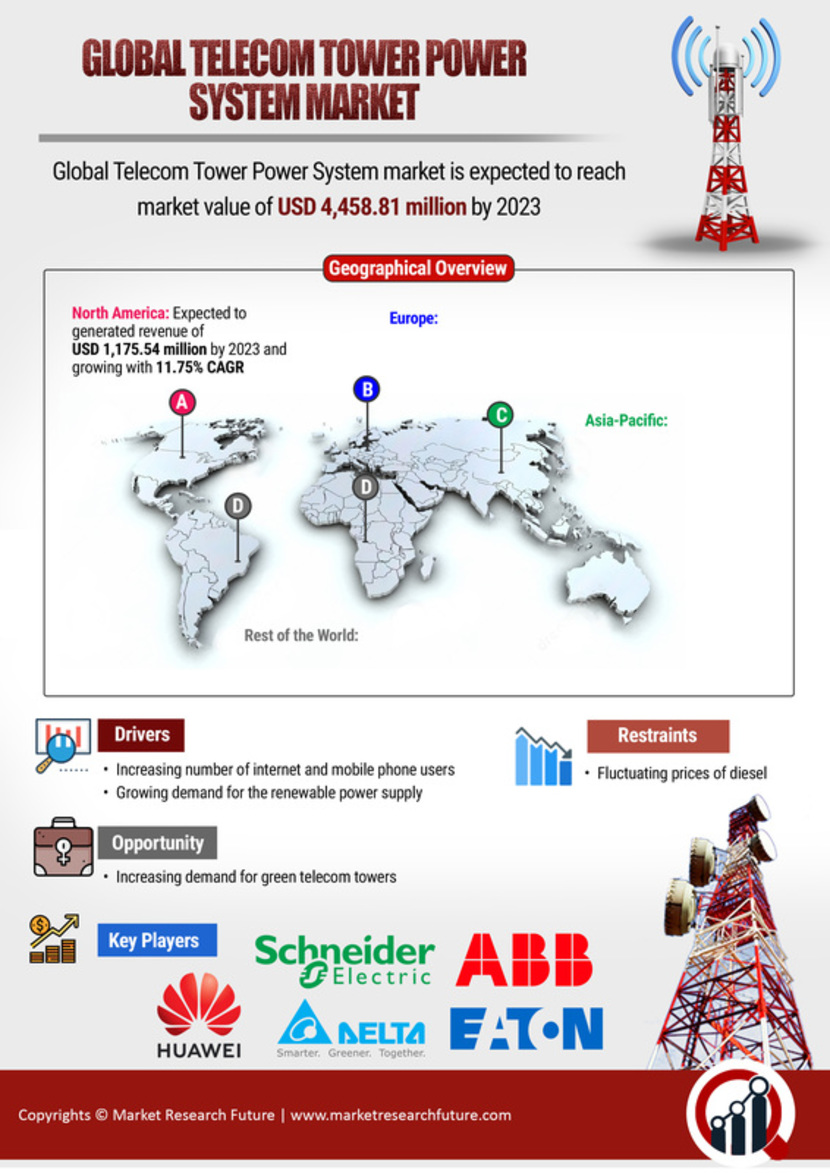 With the widespread of coronavirus disease (COVID-19) and consequent lockdowns implemented by governments in many countries, individuals are spending more time at home and using higher amounts of data. Consequently, leading service providers are adopting various strategies to benefit consumers and meet the rising demand for data, which, in turn, has a positive effect on market growth.

The rapid growth in digitalization has increased the market for telecom power facilities, as there has been a significant usage of mobile and other handheld devices in both urban and rural areas. The broadband, mobile, and IP-based direction of the telecom network ensure the accelerated growth of telecom power systems due to technological advances and the need for seamless communication services for customers. As a result, the rising penetration of smartphone devices and data communication has fuelled the demand for advanced network services like 4G, VoLTE, and 5G. This, in turn, is expected to be the focal point of the growth of the market.

In addition, with ever-growing development in the telecom industry and an increasing number of subscribers, telecom towers are being installed on a larger scale to meet demand in rural areas. In addition, the demand for broadband capacity is growing due to an increase in the number of mobile devices, application users, and Internet handlers. This, in turn, has contributed to a rise in demand for power systems. The continuous expansion of cellular networks in rural as well as urban areas to boost connectivity infrastructure is, therefore, creating business opportunities.

The on-grid segment is expected to be highly attractive over the next few years. The segment’s market valuation amounted to more than USD 1,200 million in 2017 and is projected to display a CAGR of 11.88% from 2018 to 2023. On-grid telecom tower power systems are environmentally viable and cost-effective, preferring the off-grid version.

The diesel battery segment has the largest market share in terms of value. The segment is projected to have a double-digit CAGR of 14.89% during the assessment period. The use of batteries and diesel generators in telecom towers is widespread. The combination is highly reliable, making it a sought-after power solution.

By component, batteries segment to show a strong growth rate

The batteries segment has the largest market share with a valuation of USD 558 million in 2017. The segment is projected to increase at a CAGR of 13.30% during the forecast period. Batteries are a must-have component in the telecom tower power system as they are the backup power support in the absence of AC supply.

APAC to Lead the global market

In 2017, Asia Pacific had the largest share of the global telecom tower power system market and was valued at USD 855.67 million. The region is expected to maintain its dominant position during the assessment period. Advancement in telecom infrastructure in countries like India and China is reflecting favorably on the telecom tower power system market in APAC. Moreover, there has been a major increase in the use of the 3G/4G network. Increased Internet penetration in the region requires the installation of a higher number of telecom towers.

North America is ranked second in the market for the global telecom tower power system. The market in the region exceeded the value of USD 600 million in 2017 and is projected to experience a CAGR of 11,75% during the assessment period.

There is a range of companies competing in the market for the global telecom tower power system. However, very few companies have a large global presence. Many companies are involved in offshore operations through a third-party association. Companies are competing on fronts such as price, quality, and after-market services.

This research report explores critical drivers, constraints, and challenges in the global telecom tower power system industry, regional and segment revenue estimates and assessments. The base year is 2017; the forecast period is 2017-2023. The segmentation of the market is described in the following manner

What is the predicted revenue generation of the telecom tower power system market?

The global telecom tower power system market is poised to record a market value of USD 4.5 Billion by 2023.

At what growth rate is the telecom tower power system market evolving?

The global telecom tower power system market is maturing at a whopping 13.06% CAGR over the review period of 2017 to 2023.

Who are the major market giants operating in the global telecom tower power system market?

Which type segment of the telecom tower power system market is observing the fastest growth?

The on-grid segment is expected to drive market growth over the review period.

What is the primary driving factor of the global telecom tower power system market?

Which component segment of the telecom tower power system market is expected to witness the highest demand?

The power distribution unit segment is likely to witness the highest demand in the telecom tower power system market.

Which factors are driving the dgrowth of the Asia Pacific telecom tower power system market?

Development in telecom infrastructure in emerging economies such as India and China is proving favorable on the telecom tower power system market in APAC.