With high growth in the power sector, power require requirements are continuously growing, so are technical demands on power supply and storage systems. The main reason of major losses in electricity systems is that the devices and equipment are not properly designed to combat huge loads and the existing systems require high maintenance costs. Industries and commercial sectors are looking forward for designated devices that are capable of protecting the electrical devices from the load imbalance and are appropriate for high switching rate applications.

The market for surge protection devices is witnessing significant growth because of the rise in alternative energy implementations, increase in demand for protection of electronic devices, and the power quality issues faced. According to National Lightening Safety Institute, some 30% of all power outages annually are lightning-related, on average, with total costs approaching $1 billion dollars. For protecting the buildings and residents from the lightening destruction, the manufacturers are increasing the production for lightening surge protection devices. For instance, ABB’s surge protection devices are specially designed so that in case of any lightening transient surge conditions, the products offer primary protection against multiple lightning strikes even in heaviest surge. 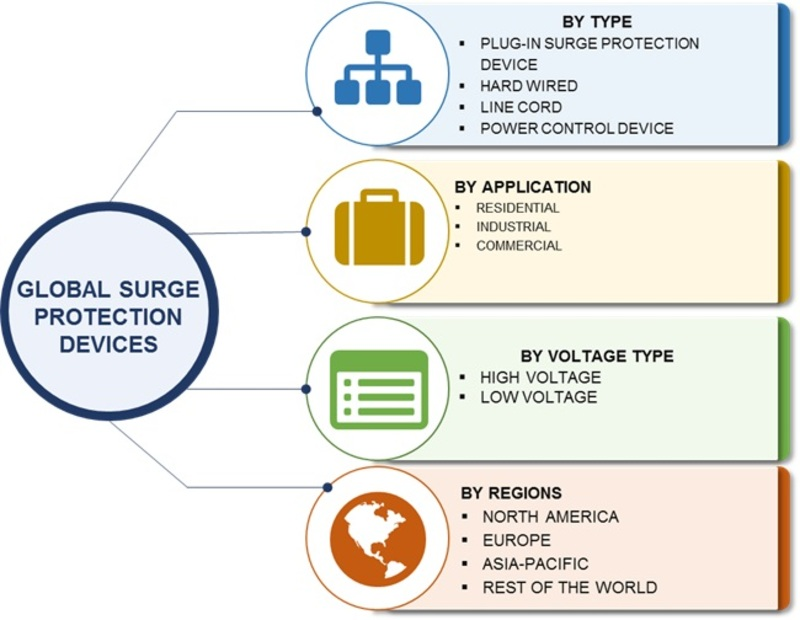 Global surge protection devices market is expected to witness exponential growth during the forecast period given the increasing awareness to secure the electrical equipment and machinery used in the industrial and residential sectors. North America and Europe region are expected to hold the largest market share. With increased urbanization projects such as smart cities, Europe and North America are expected to dominate the market. Also, the plan to digitally transform the automobile, industrial and IT manufacturing industries, is driving the market. A similar trend is witnessed in the Asia Pacific regions where there is an increase in infrastructure projects and manufacturing, especially in countries such as China and India.  The region is expected to witness an increased growth rate during the forecast period.

Global Vacuum circuit breaker market is expected to witness phenomenal growth during the forecast period owing to the increasing demand for power and electrical equipment, and existing circuit breakers becoming obsolete. Asia Pacific is dominating the market share in vacuum circuit breakers. The nations such as China, India, South Korea, and Indonesia are the fastest growing economies in the region and demand for more and more power per year. According to Department of Science and Technology of India, with the rising electricity generation from unpredictable sources from renewable sources feeding the grid, the opportunities for smart grids are immense at distribution and transmission level. This is driving market from the region. Europe vacuum circuit breaker market is likely to follow the Asia Pacific market in terms of share due to increasing renewable energy and the rising demand for connecting renewable energy efficiently to the smart grids. In 2017, Germany accounted for the largest wind power installed capacity in the Europe region.

What is the market value of the global Surge protection devices market?

Surge Protection Devices Market is projected to be worth USD 5.33 billion by 2030

What is the estimated growth rate of the global Surge protection devices?

The global Surge protection devices is projected to register a moderate 5.72% CAGR in the forecast period.

What is the type segment of the global Surge protection devices market expected to witness the highest growth?

The hard wired type segment is slated to expand as the fastest-growing segment.

What is the application segment of the global Surge protection devices market expected to witness the highest growth?

Who are the key players operative in the global Surge protection devices market?