Subsea System Market Information Report, By Type (Subsea Production, and Subsea Processing), By Component (Umbilical’s, Manifolds, Trees, Flowlines and Others), By Technology (Boosting, Separation, Injection and Compression System) and By Region - Forecast To 2030 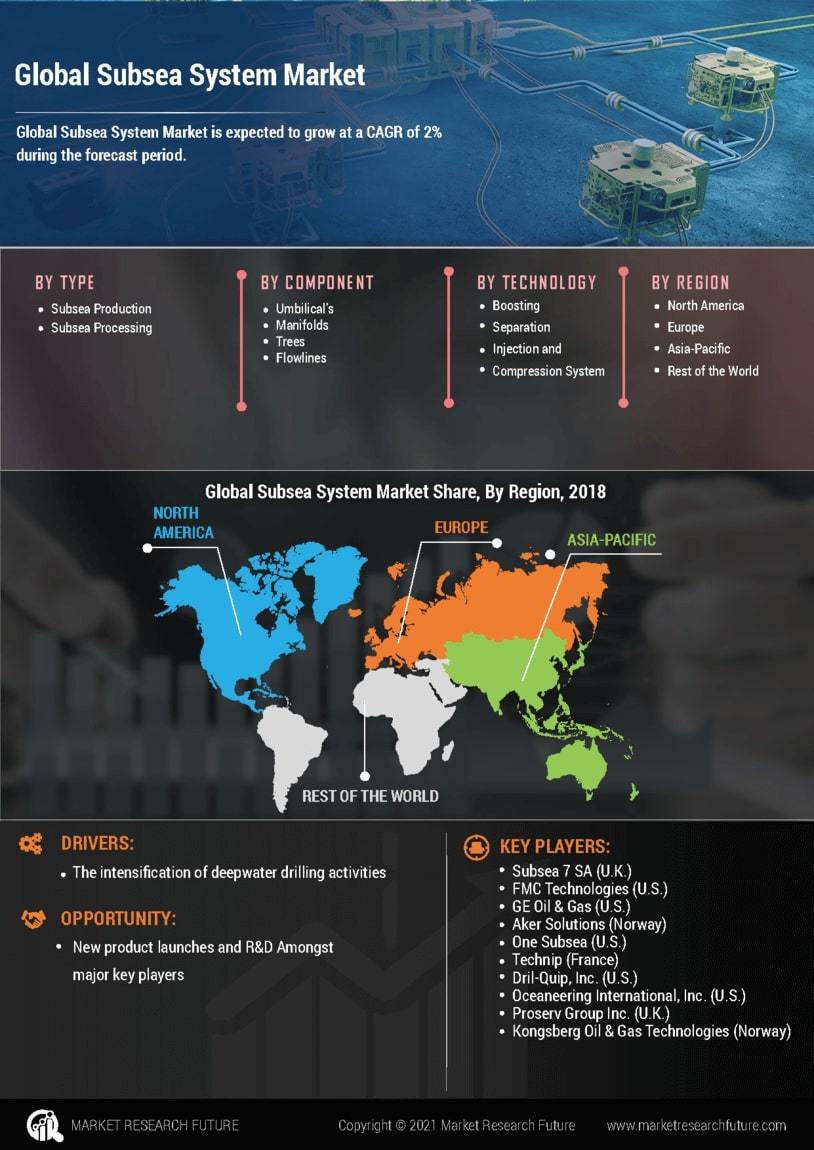 Subsea System Market share is expected to grow at a USD 16.18 Billion, CAGR of 5.78% during the forecast period.

Subsea system market share is expected to grow at a  USD 16.18 Billion, CAGR of 5.78% during the forecast period.

Global conventional resources for energy followed by discoveries and exploration spending of total upstream investment reached 9% in 2020. It was the year when the coronavirus spread and hence, it has decreased in recent years. But, with developments and uprooting employment of technology, exploration spending is expected to grow significantly as more offshore discoveries have been made in recent years. As the energy demand increases rapidly, various countries that are home to major companies and investors are shifting their interest toward deep water. This is because they hold the potential for a guaranteed supply of oil & gas for a few decades. However, this requires high technology to cater to the production of oil and gas reserves buried thousands of meters deep on the ocean floor and has increased the need for recovery improvements and cost reduction.

Subsea processing system help in reducing the dependence on costly topside facilities for offshore operations and is gaining importance as companies look to cut costs in a low oil price scenario. The employment of boosting technology dominates the subsea processing system market due to the large application's growing usage for improving recoveries from aging fields and enhancing production. Subsea gas compression technology is in the development stage compared with the other technologies. The majority of the subsea compression system projects are in the pipeline in the North Sea.

The coronavirus pandemic outbreak has brought a subsequent effect on the oil demand. Hence, the OPEC+ countries had reduced oil production by some 9.7 million barrels per day between May and July 2020. Factors such as the increase in oil prices after the downturn period and growing investments in the offshore oil & gas sector are expected to be major drivers for the offshore oil and gas equipment and services market and the subsea systems market during the forecast period. Moreover, there is a huge need for improved viability of offshore projects and rising activity in deepwater and ultra-deepwater reserves.

Based on type, the market has been segmented into subsea production, and subsea processing. Subsea production dominates the type segment of the market. On the basis of technology, boosting, separation, injection and compression system. With the need to enhance production and recovery from aging subsea fields, boosting technology is predicted to attain a large demand in the global subsea system market. On the basis of component, market has been segmented into Umbilicals, Manifolds, Trees, Flowlines and Others. Subsea trees are operate with the wellhead to control the flow of production or injection fluids and also connect tubing and other devices in the well to the seafloor and facilities above water. Umbilicals link surface and seafloor oil and gas equipment for controls, power or heat. They provide electric and fiber-optic signals, electrical power and hydraulic and chemical injection fluids to the subsea unit. 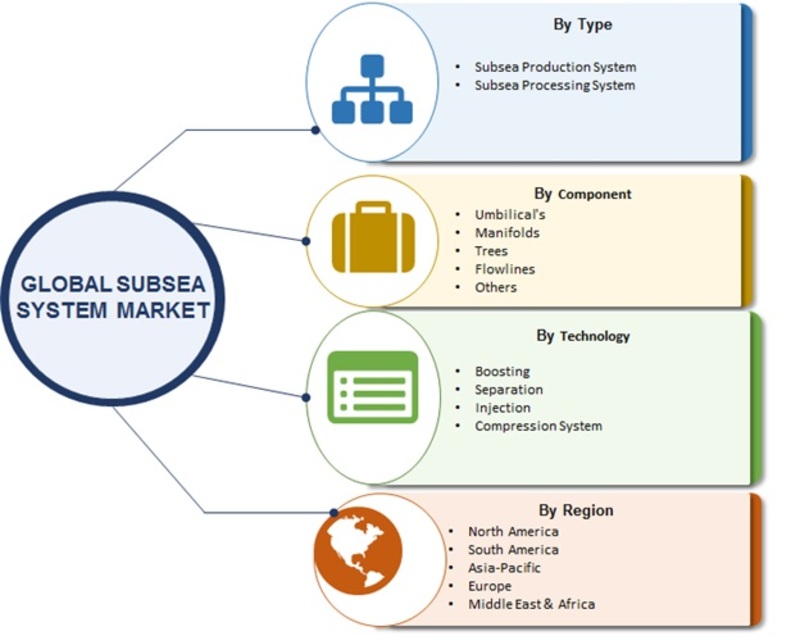 On the basis of region, subsea System market is dominated by Europe. Increasing deepwater drilling activities along with increasing spending for safety and security in Norway and the UK are expected to drive the growth of the market in the region. Europe was followed by Middle East & Africa (MEA) region. It is expected to be the fastest growing region for the market during the forecast period. In this region, Saudi Arabia and UAE, are the biggest oil and gas exporters and are planning on further expanding their oil and gas production infrastructure. Additionally, the rising investments in major oil producing African nations, namely, Angola, Ghana, Nigeria, and Equatorial Guinea, driven by large new offshore discoveries.

Latin America and Asia-Pacific region is also expected to contribute significantly during the forecast period. In Latin America, substantial oil and gas discoveries have taken place in the offshore regions of Rio de Janeiro, Perla Field in Gulf of Venezuela and in the Gulf of Mexico regions. Increasing energy demand from the countries such a countries such as China and India of Asia Pacific, is expected to fuel market growth over the forecast period.

The report for Global Subsea System Market of Market Research Future comprises of extensive primary research along with the detailed analysis of qualitative as well as quantitative aspects by various industry experts, key opinion leaders to gain the deeper insight of the market and industry performance. The report gives the clear picture of current market scenario which includes historical and projected market size in terms of value and volume, technological advancement, macro economical and governing factors in the market. The report provides details information and strategies of the top key players in the industry. The report also gives a broad study of the different market segments and regions.

Region-wise, which can be the leading market during the forecast timeframe?

Region-wise, the leading market is Europe and can carry on leading throughout the forecast timeframe.

Why is the MEA market performing well?

UAE and Saudi Arabia are known for being the largest oil and gas exporters in the world, with both the countries planning to further expand their oil and gas production infrastructure. Also, the increasing investments in oil producing African countries like Ghana, Angola, Equatorial Guinea and Nigeria, can benefit the overall MEA market in the coming years.

MRFR expects the market to achieve a growth rate of 5.78% in the years ahead.

What is expected to be the market size by 2027?

The subsea system market is growing quite significantly and by 2023, it is anticipated to expand at a tremendous pace, owing to a number of growth-inducing factors.