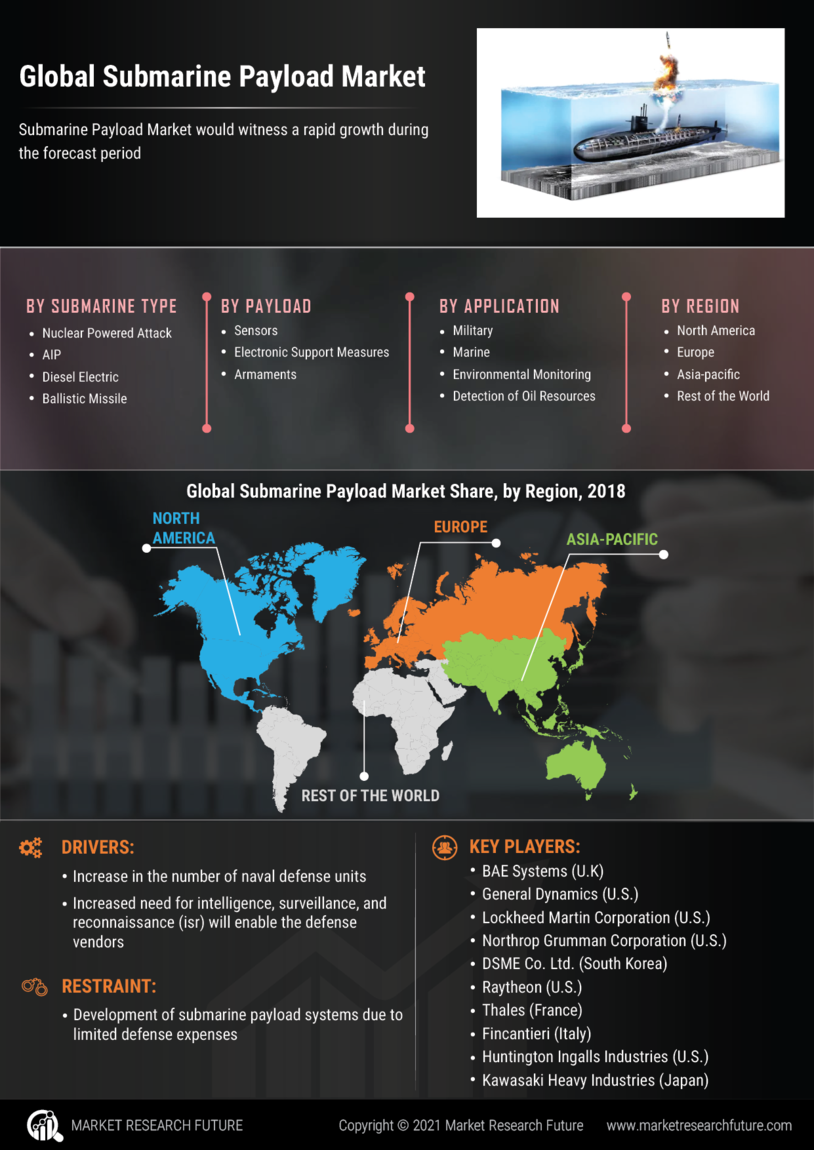 A submarine is one of the most complex platforms in Navy. Submarines are equipped with payloads systems, which accommodate advanced technologies and enhance the submarine’s warfighting capabilities. The wide variety of payloads mounted on submarines make them more flexible, survivable, and effective. For instance, nuclear-powered submarines and ballistic missile submarines carry payloads such as torpedoes and cruise missiles. Therefore, significant investment has been done on the development of submarine payload, and consequently, the market would witness a rapid growth during the forecast period. However, only a few countries are working on the development of submarine payload systems due to limited defense expenses and lack of modernization, which is a major restraint for the market.

Some of the recent developments in the market would be, BAE systems signing a contract with General Dynamics Electric Boat to begin work associated with the production of Virginia Payload Module (VPM) tubes for Block V Virginia-class submarines, which contains four large-diameter payload tubes capable of storing and launching up to seven Tomahawk cruise missiles, General Dynamics Electric Boat signing a contract with U.S. Navy to provide research and development and lead-yard services for Virginia-class nuclear-powered attack submarines which include Virginia Payload Module, and Raytheon signing a contract with U.S. Navy to build Tomahawk cruise missiles from new submarine payload tubes.

The submarines are equipped with payload systems such as vertical missile launch tubes, lock-out/lock-in chamber, and torpedo tubes. The submarine payload systems are designed for counterterrorism, localized conflict operations, and nuclear warheads. The widespread use of submarines, procurement of newly built submarines, export of new submarines, and spreading of submarine construction to several parts of the world has increased the competitiveness of submarine payload market. The changing trends in armaments policy in the naval industry have affected the submarine payload market, and several activities which used to be performed by government organizations are now being performed by commercial industries and previous government armament establishments which have now become commercial enterprises.

The global submarine payload market is segmented into submarine type, payload, application, and regions. Among submarine types, the nuclear-powered attack is widely used and has the largest market share in its segment. In the payload segment, sensors are estimated to have the largest demand during the forecast period, due to the continuous rise in R&D activities. When it comes to application, military application has the largest demand in submarine payload market, due to increasing technological requirements of military forces. For instance, Northrop Grumman Corporations Electronic Systems signed a contract of $34 million with U.S. Navy Strategic Systems Programs (SSP) to adopt missile tubes of fleet ballistic missile submarines for launching missiles, ranging from nuclear ballistic missiles to conventional cruise missiles.

On the basis of region, the market is segmented into North America, Asia Pacific, Europe, the Middle East, and South America. The North America region is expected to dominate the market in future, due to the rise in defense budgets and spendings of the countries. Asia Pacific region is second to the North America region in the global submarine payload market, due to increase in border disputes and rising number of maritime conflicts in the Indian Ocean and the South China Sea, in the regions such as Australia, China, India, Japan, Korea, Malaysia, Pakistan, Singapore, Taiwan, and Vietnam.

What is the CAGR for Global Submarine Payload Market’s expansion in the future?

The Global Submarine Payload Market will be expanding at 4% CAGR in the future.

What is the growth period for the Global Submarine Payload Market?

The growth period for the Global Submarine Payload Market is 2020–2027.

How the Global Submarine Payload Market is growing?

Global Submarine Payload Market is growing with the improved need for intelligence, surveillance, and reconnaissance (ISR).

What is the latest contributions of players through investments in the market?

What are the prime regions studied to understand the dynamics of the market regionally?

the Asia Pacific, the Middle East, North America, Europe, and South America are the regions studied to recognize the dynamics of the market regionally.