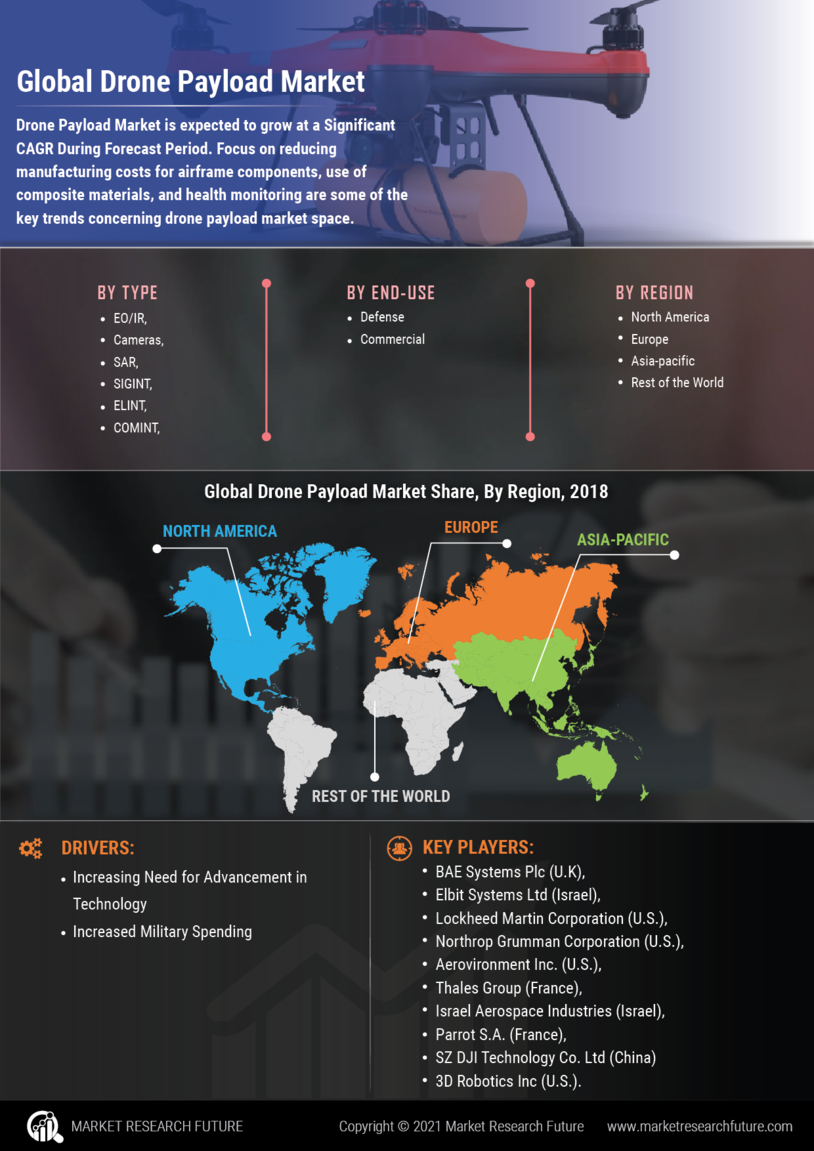 The drone payload system is the weight a drone can carry and includes cameras, sensors, and other components. It varies for different applications. For instance, the payload of drones used in the military sector is larger than that of commercial drones and includes weapon systems and missiles. Similarly, the payload of drones used for commercial applications is larger than the ones used for personal purposes. The payload of UAVs used in the commercial sector includes letters, meals, medicines, and other packages for delivery. However, major restraints of the drone payload market include privacy issues and national security regulations.

The US Department of Transportation conducted a meeting in North Carolina in April 2020 to discuss the commercial use of cargo drones to carry healthcare equipment, personal protective equipment, and medications. Due to the pandemic-induced lockdown, Matternet Inc. teamed up with CVS Pharmacy and UPS Flight Forward, a division of the United Parcel Service, to distribute prescription medication to the 135,000 inhabitants living in a retirement community via drones.

The UK government declared in April 2020 that it will use drones to transport food, medicines, and other assistance. In the future, the testing will deploy petrol-fueled fixed-wing drones with a 100 kg payload and a 1000 km range. F-Drones is the first firm in Singapore to get permission from the Civil Aviation Authority of Singapore (CAAS) to deliver medicine to cargo ships beyond visual line of sight (BVLOS). To avoid direct human touch and reduce helicopter expenses by 80 percent to 90 percent in an environmentally friendly manner, the drone delivered Vitamins to cargo ships. In the wake of COVID-19, which aims to stop the spread of coronavirus, the drone industry is seeing a surge in demand for autonomous drones.

COVID-19 has had an unprecedented and devastating worldwide impact, with commercial drones experiencing a short-term negative demand shock across all areas as a result of the epidemic. The impact of COVID-19 on the drone payload industry has been adverse. For the majority of 2020 and a few months in 2021, governments around the world were obliged to enforce strict lockdowns and limit the import–export of raw material products because to the COVID-19 pandemic. This resulted in a drop in the availability of critical raw materials used in the production of drone payload components. Furthermore, nationwide lockdowns led drone payload manufacturing plants to shut down partially or fully. The COVID-19 epidemic has caused global delays in efforts and projects related to the development of improved drone payload components.

Unmanned air systems (UAS) technology has improved quickly in recent years, allowing them to fly faster and further than ever before, as well as undertake increasingly sophisticated surveillance activities. These advancements are driven by advances in high-performance cameras, weaponry, and sensors, allowing smaller man-portable devices with more flexible tactical and surveillance capabilities.

A drone is widely regarded as a device that may be used to capture beautiful aerial pictures and high-definition films for a variety of purposes all over the world. Images and videos captured by drones are commonly used in commercial businesses such as media, entertainment, and surveillance. The rising awareness is sparking a business outlook, with businesses investing on drone technology paying close attention.

Recent improvements in drone payload technology, such as advanced payload systems operated by a smartphone application, and others, have sparked a surge in interest in these devices. Drones payloads that perform on the battlefield without the need for human interaction have been developed by defense firms.

The acquisition of landscape information, such as photographs and imagery solutions employing drones with EO/IR and other technologies, is the focus of GIS services, aerial imaging, LiDAR, green mapping, and other comparable applications. Several countries' governments have adopted regulations to protect the public's private space and national security concerns, limiting the drone payload industry's expansion.

Due to extremely effective technology for numerous aerial applications, commercial drones have been widely deployed across industries for the past few years. However, most businesses are concerned about a lack of air traffic management by many countries' aviation authorities.

The drone payload market is growing at a steady rate and is expected to upsurge in near future. This is due to the rising demand for improved surveillance and the growing demand for multipurpose commercial drones equipped with payloads. The value chain analysis for the drone payload comprises of five major components which start with the research and product development followed by manufacturing of the products, distribution, sales, and ends with post-sales services.

The global Drone Payload market has been segmented on the basis of type, end-user, application, and region.

Based on the type, the market has been segmented into (EO/IR, Cameras, SAR, SIGINT, ELINT, COMINT, MPR, Laser Sensors, CBRN Sensors & Optronics. The EO/IR segment is the largest segment of the drone payload market accounting for 20.57% of the global market.

Based on end users, the drone payload market has been segmented into defense and commercial.

Based on application, the drone payload market has been segmented into mapping and surveying, photography, monitoring, ISR, and others.

On the basis of region, the drone payload market has been segmented into North America, Asia-Pacific, Europe, the Middle East, and Africa, and Latin America.

The global Drone Payload market has been studied across Asia-Pacific, North America, Europe, the Middle East & Africa, and Latin America.

North America accounted for the largest market share of 39.90% in 2021. The drone market in North America is fragmented, with BirdsEyeView Aerobotics, DJI, Intel, and Drone Delivery Canada among the most important participants. The drone industry has almost 685 companies in the United States alone. Additionally, the arrival of firms like as Alphabet and Intel into the commercial drone sector is projected to aid market fragmentation in the coming years.

The Asia Pacific is the fastest-growing regional market globally due to. Increased military spending on drone payloads in countries like India and China is driving market growth in the Asia-Pacific region. In addition to expanding military UAV requirements in both countries, their civilian markets are likely to expand. Japan, South Korea, and Indonesia are among the countries taking steps to promote UAV research and domestic manufacture.

Thales and, CS GROUP are working with their partners in France and Europe’s defense industrial and technological base on developing the PARADE program capability to provide permanent deployable protection for critical infrastructure from drone threats. The program follows an open competition contract that was awarded after a European competitive tendering process launched by the DGA in 2021 to strengthen the drone countermeasures (counter-UAV) capabilities of the French armed forces. On February 2021

Introduction of the standardized modular payload interface kits for RQ-20B Puma™ tactical unmanned aircraft systems (UAS). The Modular Payload Standard was established by U.S. Special Operations Command (USSOCOM) in order to create a modular architectural standard for a wide variety of payloads on Groups 1 through 3 UAS. On April 2021

Which type segment is driving the market?

The EO/IR segment is expected to drive the market during the forecasted period.

What is the growth scope of the market?

The global Drone Payload market has been growing rapidly over the past few decades and is expected to reach USD 17,200.41 Million by 2027, at a CAGR of 15.3% during the forecast period.

Lockheed Martin Corporation (US), BAE Systems Plc (UK), and Northrop Grumman Corporation (US) are expected to be the major competitors in the Drone Payload market during the projected period.

The Asia-Pacific region is expected to be the largest market for the Drone Payload market during the forecast period.

Limited Air traffic Management and Stringent regulations may slow the growth of the Drone Payload market during the forecast period.