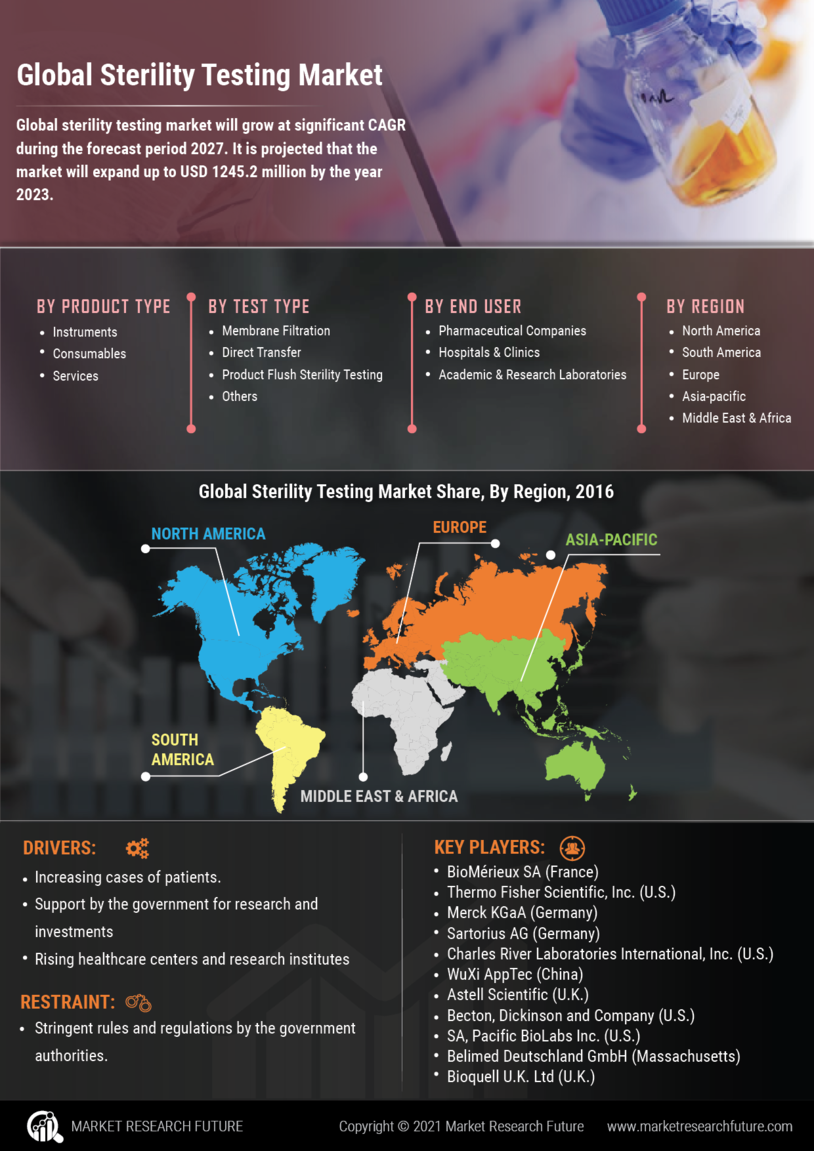 The sterility testing market was expected to cover an area worth USD 1245.2 million and projected at a CAGR of 11.7% during the forecast period of 2018 to 2023. Sterility testing is performed to know the presence of microorganisms that develop in favorable situations. Sterility testing is carried out in pharma companies, biotechnological sectors, and companies manufacturing raw materials for detection of quality on the initial materials, for controlling the process, and for validation of the manufactured products. It is used for bulk and end products of drugs, cell banks, and the raw materials used. 2015 is considered as the base year for studying and for good sterility testing market analysis where the market forecast period is expected to be between the period of 2018 to 2023.

The outbreak of the pandemic has severely affected the industry. Due to the outbreak, the production unit faced many difficulties and experienced a shutdown for many days. Manufacturing of many sterility products was hindered. COVID has hindered the research work of scientists and many other experts. The supply chain along with consumer behavior was hampered.

The government has taken steps against this outbreak. Anyone found violating such was punished.

Geographically and regionally, the sterility market is divided into four regions which include the American region, Asia-Pacific, European region, and the Middle East and African region. The pharma industry of the United States covers a dominant sterility testing market share. U. S. has adopted the new technology and has discovered and launched some new products. High expenses on research and development have been marked to be the driving factors of the sterility testing market. Some of the Asia Pacific regions have shown fast growth during the market forecast period. This is due to technological advancement, and the growth in the areas of the healthcare sector, and the rise in health facilities are the driving force of the market. The rise in investment and increase in expenses on research and development plays a main role in the enhancement of the revenue. European regions cover the largest area where the rise in competitors in pharma and biotech units play a major role in the research and launching of new products due to its rise in availability of hospitals and medical units which steers up the market growth. In the Middle East and African region, the industry has shown a little slow growth due to lack of healthcare units, types of equipment and presence of less specialized consultants are some of the reasons inhibiting the growth.

These market players track and analyze well the competitive developments like building partnerships, acquisition, merging with other companies, launching new products, and expanding well in the market ground, they also carry out the developmental activities which will help for the growth of the sterility testing industry. They have carried out top-down and bottom down research for determining the sterility testing market size. Some of them are BioMerieux SA of France, Thermo Fisher Scientific, Inc of United States, Merck kGaA of Germany, Sartorius Ag of Germany, WuXi Apptec of China, Astell  Scientific of United Kingdom, Sa, Pacific BioLabs Inc. of the United States, Bioquell U.K. Ltd of the United Kingdom and many more.

The report provides a good sterility testing market analysis about the major factors that act as a driving force for the market. It gives a good analysis about the micromarkets1 concerning the growing sterility testing market trends, future growth and this contributes to the overall market growth. The report gives a good analysis of the market opportunities for the market players and gives detailed information about the competitive benchmarking of the competitors.it gives a comprehensive analysis of the competitors holding major market share and core competencies of the key players who will help in growth and development.

What is the predicted size of the Global Sterility Testing Market?

What is the expected CAGR of the Global Sterility Testing Market?

What are major drivers of the Global Sterility Testing Market?

High prevalence of chronic diseases and testing of brand new drugs are major drivers of the Global Sterility Testing Market.

Which end-user can contribute the most to the Global Sterility Testing Market?

Pharmaceutical companies are the end-users which can contribute the most to the Global Sterility Testing Market.

Which region had the largest share in the Global Sterility Testing Market?

The Americas held the largest share in the global sterility testing market owing to advances in pharmaceutical formulations and presence of various top-end manufacturers.

Which region can display the fastest growth rate in the Global Sterility Testing Market?

Name the key players in the Global Sterility Testing Market.

Market Players have adopted the strategy of acquisitions, product launches, and partnerships for the development of the market

Merck KGaA is the market leader in the global sterility testing market with a market share of 18.7% in 2016. The company has a well-developed market, strong product portfolio, and effective distribution network around the globe. In the last three years, Merck KGaA has adopted the organic strategy of product launches and acquisitions to cement their position in the global sterility testing market. Moreover, the company has also increased investments in various R&D activities. This enabled them to launch innovative products in the market, thereby, expanding their market reach.

Charles River Laboratories Inc. assumed the second position in the global sterility testing market with a share of 12.4% in 2016. The company showed positive growth regarding revenue from 2015 to 2016 owing to strong sales in high potential emerging markets. Further, to sustain its place in the sterility testing market, the company follows strategic business strategies such as partnerships, collaborations, and acquisitions to expand their product portfolio and geographical reach. For instance, in July 2015, the company acquired Celsis International Ltd, which helped it in quality control testing of biopharmaceutical and consumer products industries.

Other prominent players in the market include Thermo Fisher Scientific Inc., Becton, Dickinson and Company (BD), SGS SA, and Baxter BioPharma Solutions. Other players accounted for a share of 48.2% in the market in 2016. Majority of the companies have adopted the strategy of acquisitions and product launches for market development. For instance, in September 2016, the company announced the acquisition of the laboratory products and services segment of Alfa Aesar, a company based in the U.K., forUSD 392 million. This acquisition would help in expanding the company’s existing portfolio of chemicals, solvents, and reagents.