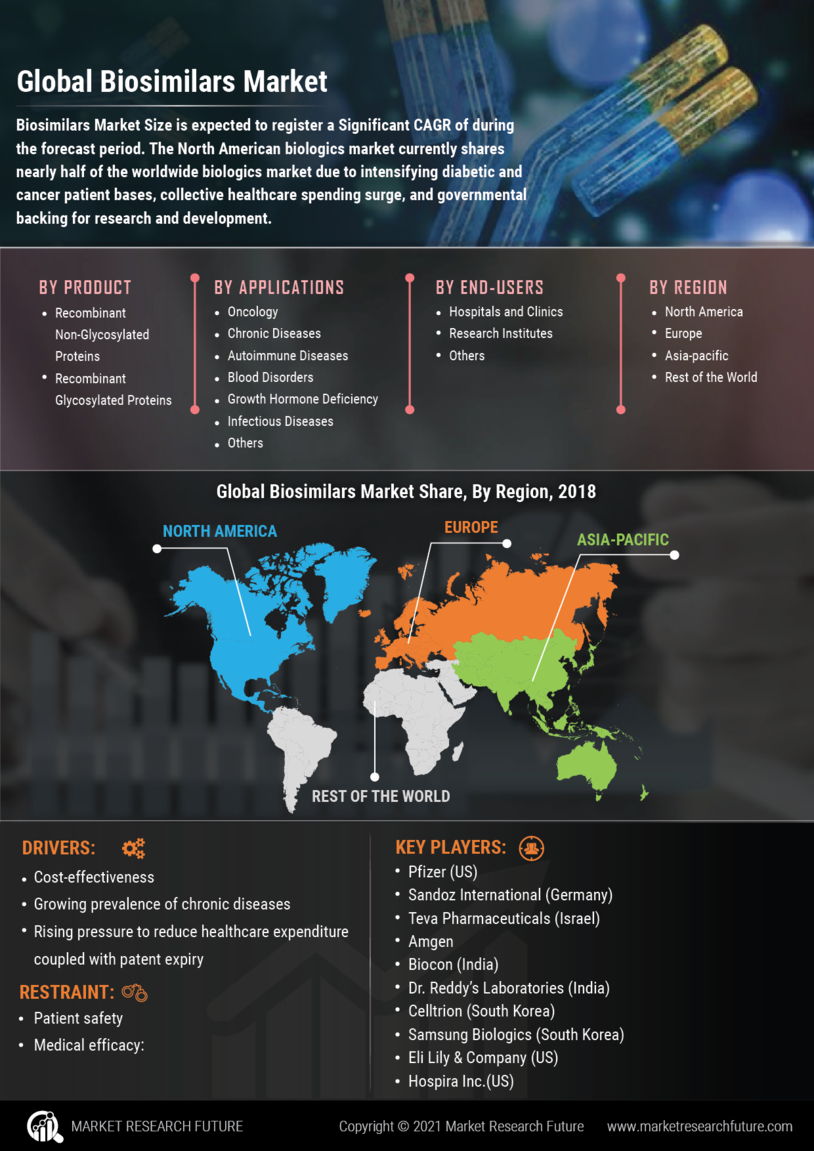 Biosimilars Market Size was valued at USD 24.38 billion in 2021 and is projected to grow from USD 28.13 Billion in 2022 to USD 95.00 billion by 2030, exhibiting a compound annual growth rate (CAGR) of 23.90% during the forecast period (2022 - 2030).Rising demand for biosimilars can be attributed to their cost-effectiveness and rise in prevalence of chronic diseases across the globe. 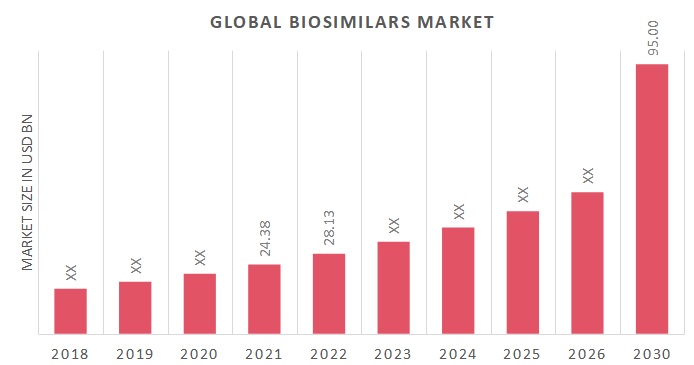 
Increase in demand for biosimilars will result in promoting business growth in the future. According to the American Journal of Managed Care (AJMC), biosimilar drugs are priced 20% to 30% lower than their reference drugs. The study conducted by the AJMC also revealed that the use of these drugs will lead to savings of USD 102.5 billion, from 2018-2025. Their lower cost of results in effective treatment of patients as well as cost-cutting of the treatment will be a major growth factor. Also, the price competition between follow-on biologics and reference drugs induces a downward effect on the prices of reference biologics, thereby augmenting the business expansion.

The 2010 Affordable Care Act (ACA) empowered the FDA to develop a specialized regulatory pathway for the approval of biosimilars, wherein the FDA also indicated that the manufacturers would require lesser costs and decreased approval times compared to the reference product manufacturers. Similarly, the European Union (EU) also developed a separate pathway for the approval of biosimilars. These regulations by the FDA and EU in turn ensured price competition amongst the manufacturers and lesser prices for the payers. The cost-effectiveness of these drugs also improves overall healthcare spending in two ways, the lower unit price of a biologic due to its competitor drug, and increased accessibility to a variety of biosimilars for the patients. Thus, the overall competitive costs of the subsequent entry biologics are projected to aid their demand over the analysis period. However, to cater the biosimilars market demand there has been significant advances to attribute to their cost-effectiveness.

The graph that follows illustrates the number of biosimilars in the development pipeline by US launchable dates. Ability to launch requires all government-granted marketing exclusivities related to the biosimilars reference product are expired upon product launch both relevant patents and regulatory-granted market exclusivities, including orphan status and 12-year data exclusivity granted to all new full biologics license applications. 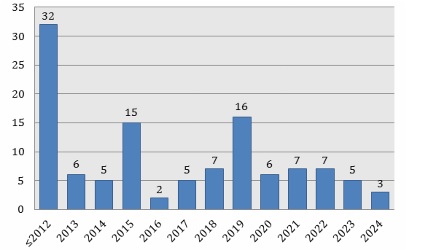 The biosimilars market segmentation, based on product, includes recombinant non-glycosylated proteins, recombinant glycosylated proteins, and recombinant peptides. The recombinant non-glycosylated proteins segment held the majority share in 2021 in respect to the biosimilars market revenue. This is primarily owing to the rising prevalence of cancer patients and high treatment adoption rate. Also, the technological advancements have led to cancer being a somewhat manageable disease in the recent times. The chemotherapy and radiotherapy prescribed to cancer patients have also led to some of the major side effects such as neutropenia or low white blood cells. For instance, according to the American Cancer Society, around 200,000 new cases of breast cancer and 60,000 new cases of leukemia were diagnosed in the US in 2022. Thus, the rising prevalence of cancer is one of the major drivers for the demand for the biosimilars industry, for treatment as well as adjunctive therapies.

July 2021:
Viatris Inc. and Biocon Biologics Ltd. announced the US Food and Drug Administration (FDA) approval of Semglee injection for the treatment of diabetes. It is the first interchangeable biosimilar product under the 351(k) regulatory pathway.

December 2020:
Amgen received US Food and Drug Administration (FDA) approval for its RIABNI, a biosimilar to Rituxan (rituximab), for the treatment of adult patients with non-Hodgkin's lymphoma, granulomatosis with polyangiitis, chronic lymphocytic leukemia, and microscopic polyangiitis.

The biosimilars market segmentation, based on application, includes oncology, chronic diseases, autoimmune diseases, blood disorders, growth hormone deficiency, infectious diseases, and others. The oncology segment dominated the market in 2021 in respect to the biosimilars market revenue. This is due to the high incidence of cancers worldwide. According to the International Agency for Research on Cancer (IARC), the estimated number of new leukemia cases in 2021 was 1,898,160 in US. According to the same source, the disease also had significantly high mortality, with a total death toll of 23,660. Additionally, according to the same source by 2040, the burden of cancer is expected to grow to 27.5 million and 16.3 million deaths worldwide. Also, the increasing incidence of cancer cases is expected to drive the need for advanced cancer drugs for the effective treatment of patients. Hence, rising incidence of cancers for positively impacts the biosimilars market growth.

May 2022:
Amneal Pharmaceuticals, Inc. received United States Food and Drug Administration (FDA) approval for a Biologics License Application for pegfilgrastim-pbbk, a biosimilar referencing Neulasta. The product will be marketed under the proprietary name FYLNETRA.

December 2021:
Coherus BioSciences, a leading biosimilar developer, received US food and drug administration (FDA) approval for adalimumab biosimilar and Yusimry (CHS-1420) for the treatment of tumor.

By Region, the study segments the market into North America, Europe, Asia-Pacific and Rest of the World. North America Biosimilars held the largest market share in 2021. This is attributed to the growing incidence of chronic diseases, such as cancers, and along with the increased investment in research and development activities by the major players across the region.

For instance, India biosimilars market is the favored destination for medical travelers due to the availability of surgeons, cutting-edge technology, & cost-effective treatments. On the other hand, Singapore is famous for the presence of well-trained doctors, state-of-the-art facilities, and quality care. As per the data cited in the Medical Tourism Index 2021-21 published by Medical Tourism Association in July 2021, Singapore is ranked at 2nd position, Japan at 3rd, India at 10th, South Korea at 14th, and China at 33rd out of the top 46 international healthcare destinations. Hence, Asia-Pacific is anticipated to register the highest growth rate over the forecast period from 2022–2030.

Major market players are spending a lot of money on R&D to increase their product lines, which will help the biosimilars market grow even more. Market participants are also taking a range of strategic initiatives to grow their worldwide footprint, including new product launches, contractual agreements, mergers and acquisitions, increased investments, and collaboration with other organizations. Competitors in the biosimilars industry must offer cost-effective items to expand and survive in an increasingly competitive and rising market environment.

One of the primary business strategies adopted by manufacturers in the biosimilars industry to benefit clients and expand the biosimilars market sector is to manufacture locally to reduce operating costs. In recent years, biosimilars has provided medicine with some of the most significant benefits.

Biocon Biologics (India) is a globally recognized, innovation-led organization that is enabling access to high quality, advanced therapies for diseases that are chronic, where medical needs are largely unmet and treatment costs are high. With Covidien, the company has accelerated and advanced its ability to create meaningful innovations for hospitals, health systems, and healthcare providers to deliver the best care possible to patients and their families worldwide. In May 2022, Biocon Biologics, and Viatris Inc. launched Abevmy, a bevacizumab drug in Canada. This drug is a biosimilar to Avastin, that is developed by Roche and was approved by Health Canada for four oncology indications. This launch has helped the company to further broaden their oncology portfolio in Canada, thereby expanding patient access to cost-effective biologics for cancer treatment.

September 2021:
Sandoz, announced the formation of a commercialization agreement with Bio-Thera Solutions for the biosimilar BAT1706, bevacizumab. This agreement added to Sandoz's leading off-patent portfolio for oncology and helped in market expansion. The agreement also helps the company to strike a perfect strategic balance between patient care and cost-effectiveness

February 2022:
Biocon Biologics entered into a definitive agreement to acquire the biosimilars business of Viatris, a franchise focused on oncology, immunology, and endocrinology. This acquisition will help the company to strengthen its position through its portfolio and future pipeline of biosimilar drugs

How much is the biosimilars market?

How Big is the U.S biosimilars market?

What is the growth rate of the biosimilars market?

Which region held the largest market share in the biosimilars market?

The North America held the largest market share in the biosimilars market.

Who are the key players in the biosimilars market?

Which end user had the largest market share in the biosimilars market?