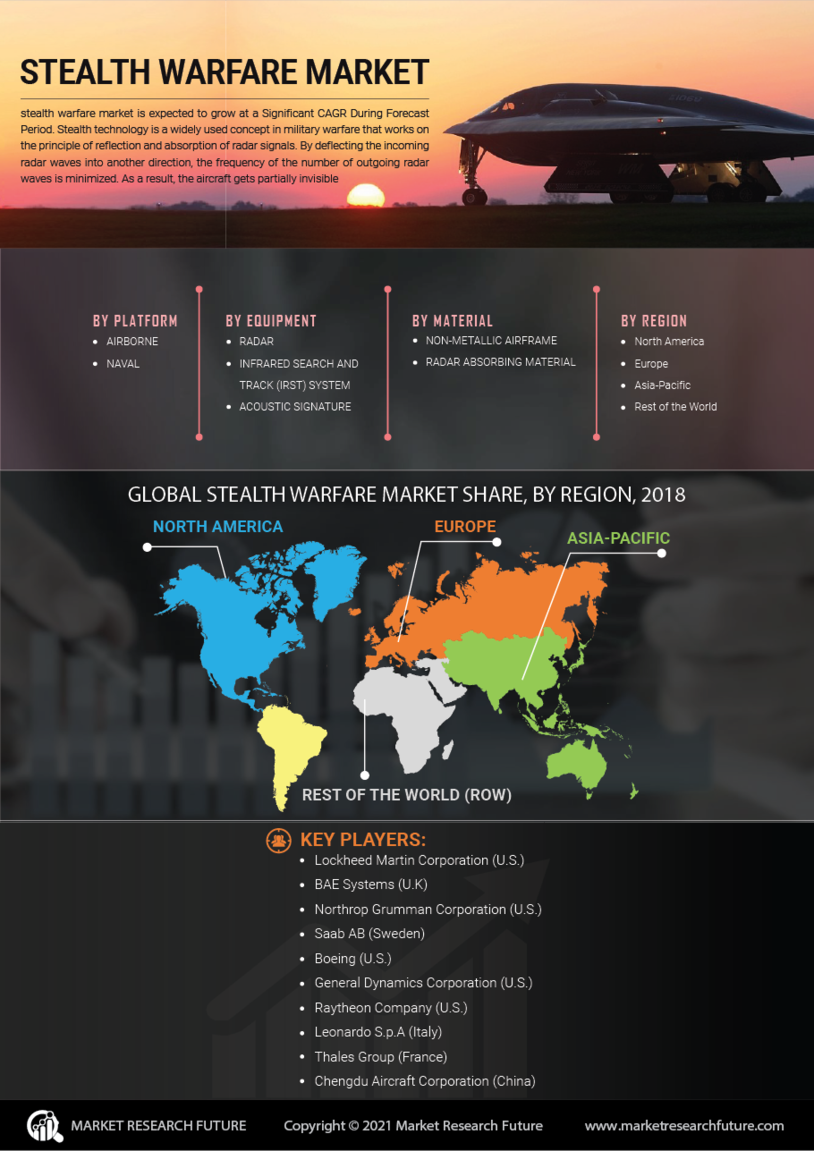 Stealth technology is a widely used concept in military warfare that works on the principle of reflection and absorption of radar signals. By deflecting the incoming radar waves into another direction, the frequency of the number of outgoing radar waves is minimized. As a result, the aircraft gets partially invisible.

On the basis of platform, the market has been segmented into airborne and naval. In the airborne market segment, stealth warfare technology allows an aircraft to be partially invisible to radar or any other means of detection systems and it reduces its detection range. The goal of stealth warfare technology is to make an airplane invisible to enemy radar systems. There are two different ways to create invisibility; first is that the airplane can be shaped (made up of completely flat surfaces and very sharp edges) so that any radar signal it reflects are reflected away from the radar equipment, while the second way is that the airplane can be covered with materials that can absorb radar signals. However, the advanced radar systems pose a significant threat, as they can detect a stealth aircraft. For instance, the Russian 1R13 radar system is very much capable of detecting the F-117 "Night Hawk" stealth fighter plane.

On the basis of equipment, the stealth warfare market is segmented by radar, Infrared Search and Track (IRST) system, and acoustic signature. The radars segment has been further sub-segmented as radar-absorbent plastics, carbon-based materials, and ceramics. The combination of these materials has been developed for use in stealth warfare. Moreover, the combination of such materials with radar-absorbing surface geometry enhances their stealth. Similarly, sensors such as an acoustic signature, Infrared Search and Track (IRST) system are the primary means of detection and tracking. However, it was observed that acoustic sensors provide only rough indications regarding the elevation of an aircraft without providing the range or any other parameter, whereas, the IR sensors are effective in determining elevation more accurately. These IR sensors, however, get severely affected by weather, and are required to be coupled with radar for range determination. Hence, these sensors have a widespread application despite the limitation of variable atmospheric conditions affecting their performance.

On the basis of material, the stealth warfare market is segmented into non-metallic airframe and Radar-Absorbent Material (RAM). In RAM, generally, paints are used on the metal surface and edge of aircraft or ships. The material and thickness of RAM coatings can vary according to its application. Presently, a commonly used material is iron ball paint, which contains microscopic iron particles that resonate in tune with incoming radio waves and dissipate the majority of their energy as heat, leaving little energy to bounce back to detectors. Moreover, due to the advancements in the field of metallurgy, the material segment is estimated to witness significant growth during the forecast period.

The high cost of the stealth warfare system is one of the restraint of this market. Although, despite of high cost, the major countries will be looking forward to invest in this market to support its military tactics. In the future, as air defense systems advance in terms of development, stealth technology can be a differentiating factor between countries. In the future, stealth technology will not only be incorporated in fighter planes and bomber aircraft, but also in ships, helicopters, transport planes, and tanks. For example, the RAH-66 "Comanche" and the Sea Shadow stealth ship is a trial stealth ship built by Lockheed Martin Corporation for the U.S. Navy to determine and test the radar profiles of the ships. Therefore, the stealth warfare market is estimated to witness a CAGR of more than 8%, during the forecast period from 2018 to 2023. 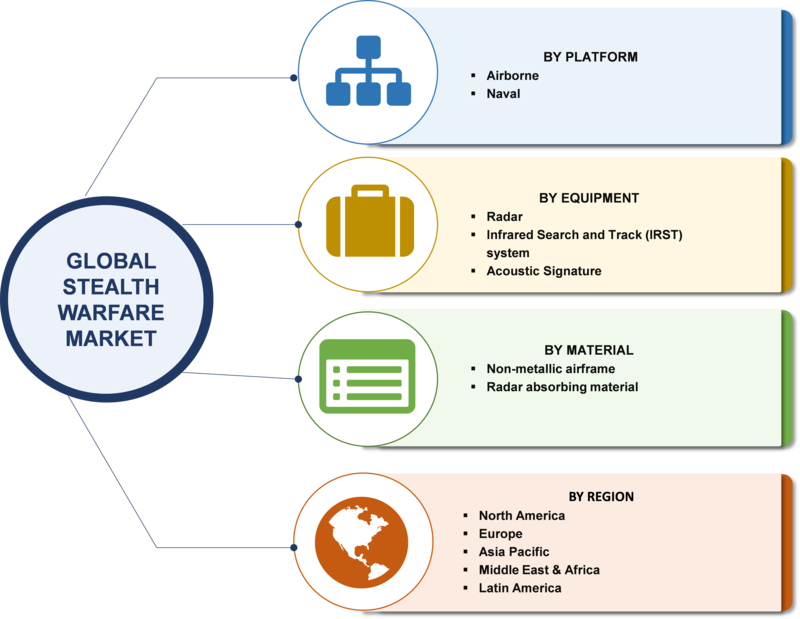 The report for Global Stealth Warfare Market by Market Research Future covers extensive primary research. This is accompanied by a detailed analysis of qualitative and quantitative aspects by various industry experts and key opinion leaders to gain deeper insights into the market and industry performance. The report gives a clear picture of the current market scenario, which includes the historical and forecasted market size, in terms of value and volume, technological advancement, macroeconomic, and governing factors of the market. The report provides comprehensive information about the strategies of the top companies in the industry, along with a broad study of the different market segments and regions.