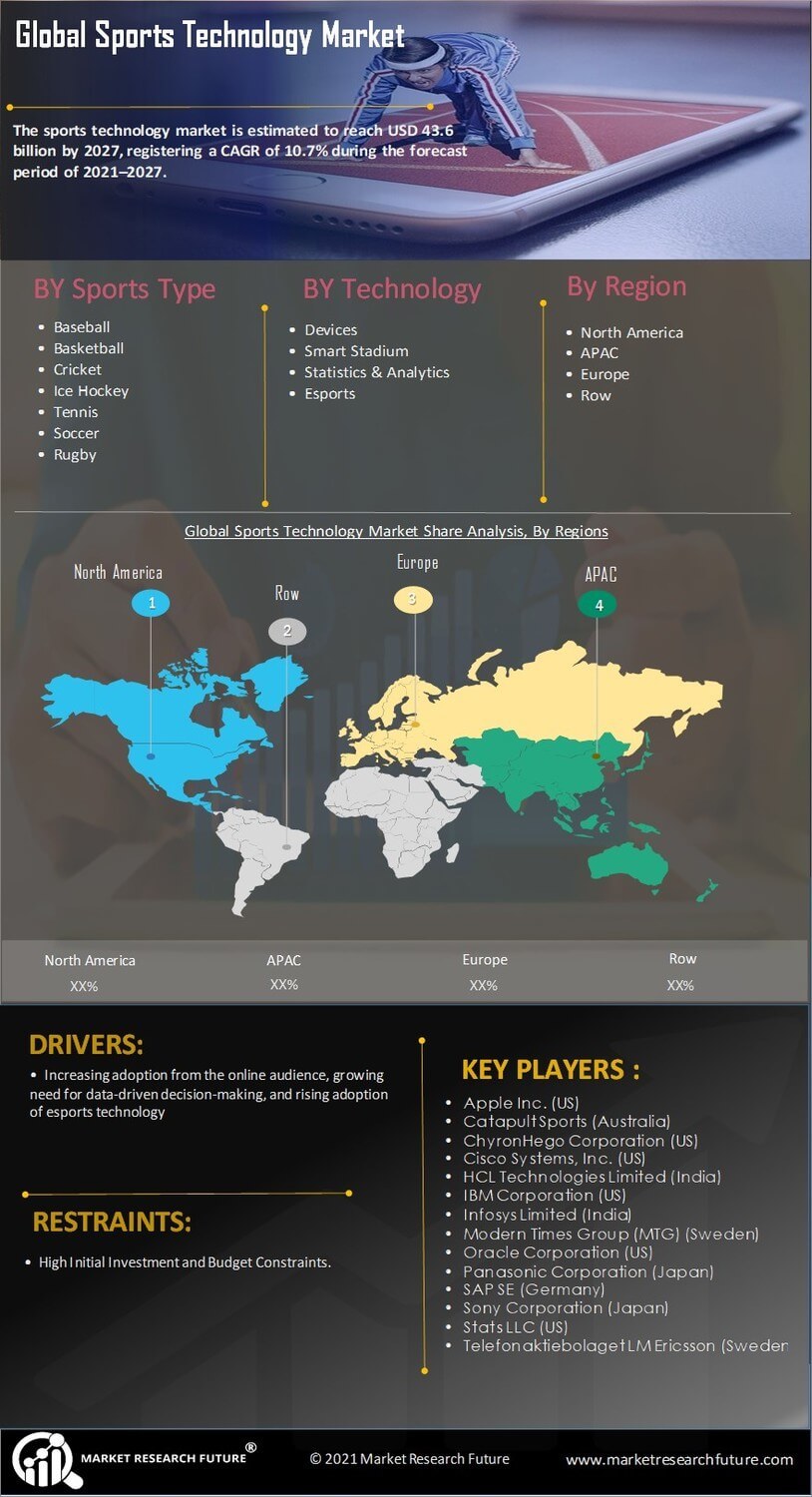 Globally, the size of sports technology market is expected to grow to USD 43.6 billion, at 10.7% of CAGR by 2027, during the forecast period of 2021–2027 driven by the increasing adoption of emerging technologies owing to digitization has created a substantial demand for the global market.

The increasing adoption of emerging technologies, including data analytics, artificial intelligence (AI), and machine learning (ML), across numerous sporting leagues and events, reprojected to drive the sports technology market over the review period. Team management emphasizes viewership engagement, which along with the digital transformation of sports arenas, reprojected to boost the demand for technology-driven decision-making in sports.

The Sports Technology Market is undergoing a transition owing to rising investments by numerous organizations in adopting cutting-edge technologies to monitor the player's health and stats performance while engaging viewers. Additionally, increasing investments in ticket sales, event marketing, and operations to enhance revenues of the league are also predicted to enhance the sports technology market growth. Digitalization and adoption of Ai dramatically improve the effective monitoring of sports by their management teams.

The increasing number of sports leagues around the world are creating new opportunities for infrastructure development and the adoption of advanced technology services. Professional level sports leagues adopt new and improved technologies, including data analytics, smart stadium, and performance tracking wearables. For instance, FIFA permitted the adoption of performance tracking wearables in live games in 2018.

The Covid-19 pandemic has ravaged numerous industries across the world, including live sports and peripheral businesses like broadcasting, hospitality, and transportation. Many scheduled tournament events, including the Tokyo Olympics, have been postponed or have had their formats altered to adhere to social distancing norms. Stakeholders, as a result, are trying to gauge the revenue and viewership impact from interrupted revenue generation and sudden drop in audience engagement and attendance.

In 2020, global lockdowns, and particularly in China and other Asian countries, adversely impacted the production of digital signage and wearables. Lean staff and limited working hours restricted the research and development, manufacturing, and adoption of digital signage and wearables. Distribution networks were temporarily disrupted in numerous locations due to the restrictions imposed by various governments, thereby restricting the growth of the devices segment in 2020. The cancellation of some highly anticipated sporting events led to a drop in merchandise sales and ticketing revenue.


Data-driven decision-making has been around in the business sector for a few years since the advent of Artificial Intelligence (AI) and Machine Learning (ML). It has also given rise to a consolidated structure for organizations to take facilitate collective decision-making with the help of accurate data, encouraging sporting teams and managements across the world to adopt emerging technologies. However, the swift adoption of data-based decision-making models has also significantly increased data generation during every sporting event. Huge volumes of data are required to be computed, organized, and analyzed for an in-depth understanding of player stats, health, and their performance over the league/tournament. The adoption of wearable devices provides these stats to the team management for better analysis, based on which the team strategy can be designed. Therefore, the increasing adoption of emerging technologies owing to digitization has created a substantial demand for sports technology market.


Increased adoption and extensive use of sports technology are commercially viable only for the more prominent teams with bigger investments, given the initial investments and service provider contracts that can be expensive. A larger chunk of the unorganized or smaller leagues and federations cannot afford the initial investments required, leaving out a big part of the market unable to adopt the technology. Additionally, the talent pool of data analysts and service providers is primarily concentrated in North America and Europe, while league team owners in Asia-Pacific and other geographies are struggling to organize effective management teams.


Artificial intelligence (AI) integrated with sports technologies can complete complicated tasks with precision and ease. AI has found adoption in numerous application areas, including banking & financial services and manufacturing. The successful integration of emerging technology has stimulated solution providers to integrate their technology with AI modules to cater to the increasing demand for sports technology. The need for integrating AI and wearable technology for the live tracking game and players’ performances is projected to increase over the review period.

By technology type, the global Sports Technology Market has been segmented into devices, smart stadium, statistics & analytics, and e-sports. The devices segment is further divided into wearables, digital signages, and cameras. The smart stadium segment is further classified into stadium & public security, building automation, and event management. The e-sports segment is classified into ticketing & merchandising, sponsorship, and advertising. Among these, the devices segment dominated the market in 2020 and is projected to dominate over the review period. International sporting leagues and associations are increasingly allowing players to wear devices that monitor the health and performance of players on the field in live events.

The global sports technology market is projected to grow at a substantial rate during the review period from 2021 to 2027. The geographic analysis of the sports technology market has been conducted for North America (the US, Canada, and Mexico), Europe (the UK, Germany, France, Spain, Italy, and the rest of Europe), Asia-Pacific (China, Japan, India, and the rest of Asia-Pacific), and the rest of the world (the Middle East and Africa and South America). Among these, North America dominated the sports technology market in 2020 due to the concentration of major sports leagues and tournaments in the region and a large talent pool of competent analysts. On the other hand, Asia-Pacific is expected to witness the fastest growth during the forecast period.

Dominance of North America Throughout the Forecast Period

North America has been at the cutting-edge of emerging and innovative technologies. The sports technology market in North America is a competitive market owing to the presence of numerous software companies and data analytics service providers. The regional market has witnessed steady growth over the past decade and is projected to witness similar growth prospects compared to other regions. The well-developed culture of league sports in North America and the proliferation of the technology industry are key factors contributing to the growth of the sports technology market in this region. The US and Canada are key countries considered for market analysis in this region. Organizations in both these countries are implementing AI/ML solutions, owing to the rising trend of data-driven decision-making and wearable device innovations.

Europe consists of numerous countries which are financially sound and technologically advanced. The UK, France, and Germany are the key countries considered for market analysis in the European region. The sports technology market in Europe is witnessing substantial growth owing to the adoption of wearable performance tracking devices, smart camera technologies, and data collection models. Awareness about the benefits of sports technology, coupled with an increase in the number of service providers, has led to the more extensive acceptance of sports technology solutions.

The global sports technology market is characterized by the presence of several international vendors. The sports technology market is highly consolidated and competitive, with most players competing to gain market share in a growing Sports Technology Market. Vendors compete based on product quality, cost, ease of adoption, and data security and reliability. The growth of Sports Technology Market vendors depends upon market conditions, government support, especially in the post-pandemic scenario, and industry development.

In May 2021, UK-based Player maker launched boot-mounted sensors to measure all aspects of the wearer shot velocity and foot usage to sprint speed and stride length in league-level soccer matches.

At what CAGR is the sports technology market predicted to grow during the forecast period?

What will be the valuation of the sports technology market during the forecast period?

The sports technology market is predicted to reach USD 43.6 billion by 2026.

Which region will lead the global sports technology market?

What are the key factors driving the sports technology market?

Who are the key contenders profiled in the sports technology market?