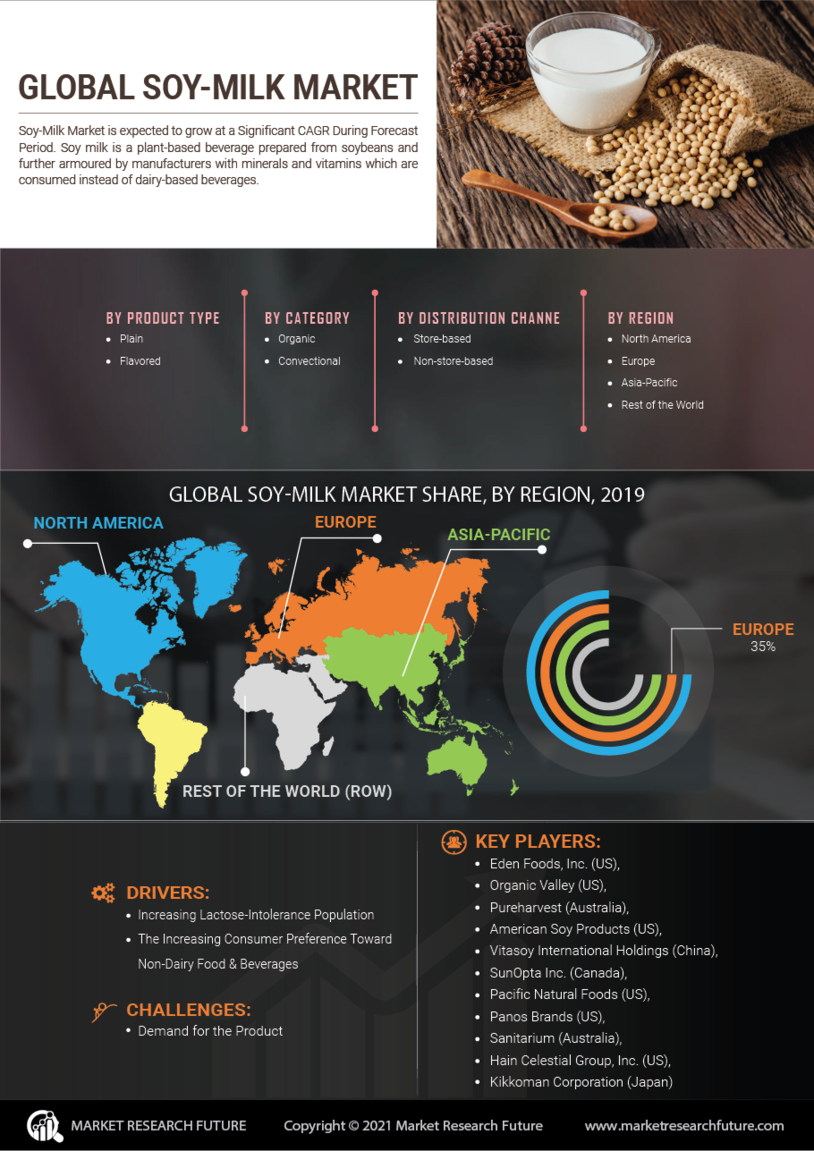 The soy milk market size is expected to reach USD 16.76 Billion in 2030, with a compound annual growth rate of 6.66% during the period of forecast 2022-2030. Soy milk is a plant-based beverage prepared from soybeans and further armoured by manufacturers with minerals and vitamins which are consumed instead of dairy-based beverages. It also has fewer calories and more protein in comparison to cow milk and due to the rising problem of obesity, it is preferred by most people.

The coronavirus pandemic has given a very hard time to most of the manufacturing, developing, production, and logistic units of the market. Due to this pandemic situation, restrictions were imposed by the government of different countries. The Soy milk market also witnessed some downfall as all the restaurants, Stalls, and shops were closed due to Covid-19 restrictions where either milkshake made up of soy milk are being served or other non-dairy products are available for consumption. Also, the supply chains have been disrupted due to these covid-19 restrictions which have largely impacted which have drastically brought down the sales of the soy milk market. But on the other side, the inclination of consumers towards usage of health-oriented food and beverages products due to the terror of this pandemic situation will enable this industry to make a powerful comeback once these restrictions are lifted.

One of the factors responsible for the growth of this soy milk market is considered to be an economic option due to its lower price in comparison to other alternatives like almond milk or cashew milk and providing more health benefits than such options. Also, the rising demand for lactose-free products they are digested by the human body very easily and it is another factor responsible for the growth of this market. Lastly, the launch of different flavours of soya milk with enhanced protein content is another factor driving the market growth to a large extent. The production volume of soya beans is anticipated to 83 million metric tons in 2030 from 54 million metric tons in 2022.

Due to a lack of awareness about the health benefits offered by the consumption of soy milk, the demand for the product is still very low in some regions of this world which is one of the major factors that may hamper the growth of this market during the period of assessment. Secondly, the RELAXED availability of alternatives like almond and cashew milk is another factor that may act as a barrier to the growth of this soy milk market.

The use of soya can be seen in various products. Cheese made up of soya is generally known as tofu and is very popular among the fitness industry because it has a very high content of protein present in it. Also, this tofu is being used by households in the preparation of various dishes and is considered to be a better alternative to the use of cottage cheese and PANEER. Pulses of soy are very famous among the countries of the Asia Pacific region owing to their deliciousness and a lot of health benefits offered by its consumption. The production of eggless mayonnaise is trending at a very large scale these days and is considered to be a better option than using regular mayonnaise. Also, the processing of soy concentrates takes a lot of time in following its natural procedure, so many studies and researches are being carried out to find some fast and effective way of processing natural soya.

Soy milk market share is anticipated to witness significant growth owing to the performance of different market segments. Among these segments, the desserts segment will be the fastest-growing and also contribute towards this market growth more than any other segment. As the consumption of Non-dairy ice cream and milkshakes is increasing day by day which is another factor responsible for the tremendous growth of this segment. Soy milk is widely used in the preparation of healthy smoothies consumed as desserts or post-workout protein sources among different countries all around the world.

Also with rising health consciousness among the population, the consumption of soy milk is increasing due to the good content of protein present in it. Soy milk can also be used in making different types of milkshakes with some added ice cream on it and can be served in restaurants too. For an amplifying use the soy milk market has been segmented into the following on different bases:

Based on the application it has desserts, cheese, snacks, and beverages.

Based on product type, it has plain and flavored.

Based on the category it has conventional and organic.

Based on distribution channel it has store-based and non-store based. Also, the segment named store-based is further divided into supermarkets and hypermarkets.

The SOY MILK industry movements are remarkably working in 6 major regions of the world that is North America, Asia Pacific, Africa, Europe, the Middle East, and Latin America. Among all these regions, the European region will dominate soy milk market, and the reason attributed to it is the rising prevalence of lactose intolerance among consumers. Also the increasing awareness among consumers about different types of side effects due to eggs and meat consumption most of them are shifting their preference towards a vegan diet which in turn will increase the growth of this market in this region. Germany will be the leading country responsible for the growth of this market in the European region. Asia pacific region will be the second-largest market due to the consumption of milk being considered a good source of protein for a long period in its developing economies like India and Japan.

To get a detailed and profound idea about the market insights, it is very important to create a competitive environment amongst the different key players at different soy milk market locations all around the country. All the market players are competing with each other globally in the international markets by implementing various types of strategies such as product launches and upgrades, mergers and acquisitions, partnerships, etc. The prime players of this market include:-

The SOY MILK industry report presents a shift analysis that includes market drivers, opportunities, and restraints that are available in the global market. The report discusses the impact of covid-19 on the key players of this market. The report also tells about the market segmentation on a different basis and how a competitive environment is developed among the key players around the globe. At last, the report presents some recent developments in this industry.

What would be the soy milk market valuation by 2030?

Soy milk market CAGR would be 6.66% during the forecast period.

What could hold back the soy milk market growth?

What are the distribution channels included in the soy milk market growth?

Store-based and non-store-based are soy milk market segments based on the distribution channel.

Which region would dominate the soy milk market?