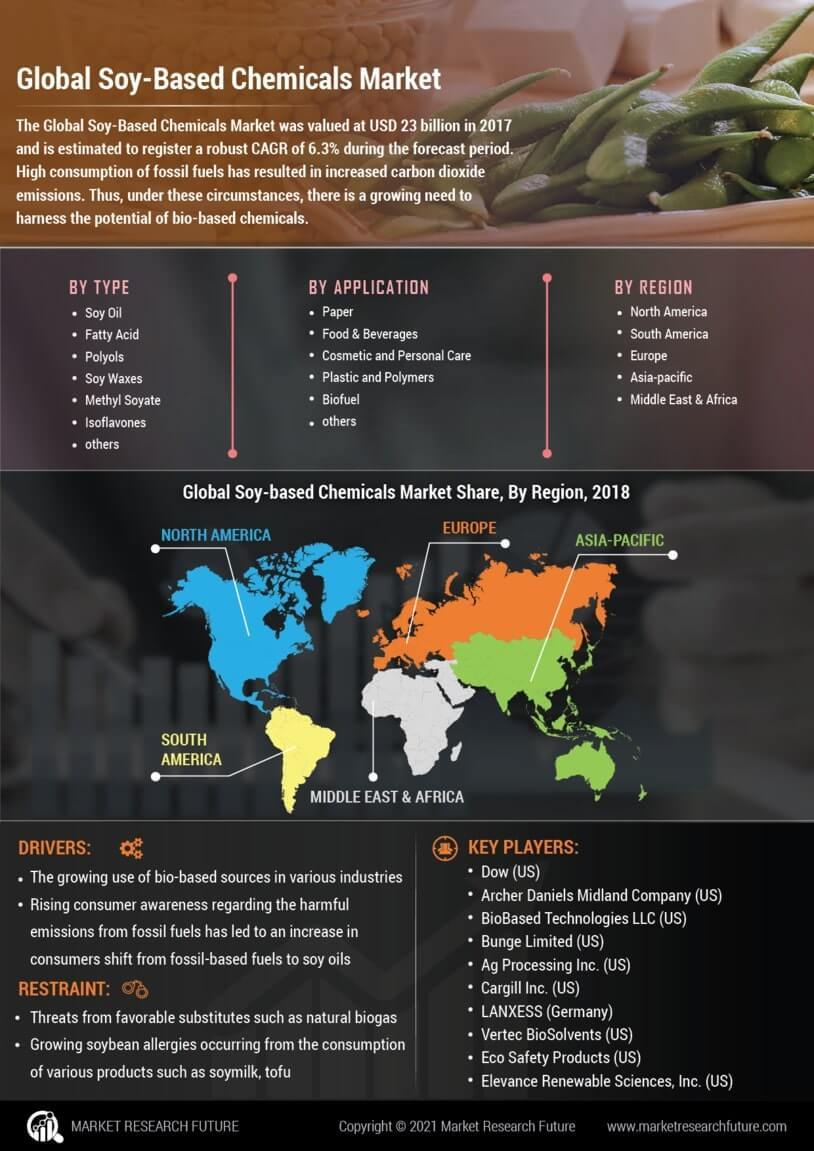 According to MRFR analysis, the global soy-based chemicals market was valued at USD 43 billion in 2030 and is estimated to register a robust CAGR of 6.50% during the forecast 2030.

According to MRFR analysis, the global soy-based chemicals market was valued at USD 43 billion in 2030 and is estimated to register a robust CAGR of 6.50% during the forecast 2030. High consumption of fossil fuels has resulted in increased carbon dioxide emissions. Thus, under these circumstances, there is a growing need to harness the potential of bio-based chemicals. Soy-based chemicals are considered as an effective substitute for petroleum and other crude-derived chemicals. Soy is largely cultivated in the US, India, China, Brazil, and Argentina countries. Apart from its use in food and beverages in soymilk and soy oil, soy-based chemicals have widespread applications in cosmetics, paper, and biofuel.

The growing use of bio-based sources in various industries on account of stringent government regulations is expected to be the major driver in this market. Also, rising consumer awareness regarding the harmful emissions from fossil fuels has led to an increase in consumers shift from fossil-based fuels to soy oils, which further boosts the market growth. Furthermore, easy production of soybean and increasing government investments for the production of soy-based chemicals is likely to create lucrative opportunities for the market players. Growing R&D investments in product development and better growth of soybeans are likely to offer immense opportunities to the manufacturers of soy-based chemicals. In addition, unique chemical structure with better performance characteristics can lead to competitive advantages from proprietary products. Moreover, surging demand for soy-based candles is one of the major trends to contribute to the growth of the global soy-based chemicals market.

However, threats from favorable substitutes such as natural biogas, are likely to be a restraining factory in the global soy-based chemicals market. Also, growing soybean allergies occurring from the consumption of various products such as soymilk, tofu, among others may hamper the market growth in the coming years.

Some of the key players operating in the global soy-based chemicals market are Dow (US), Archer Daniels Midland Company (US), BioBased Technologies LLC (US), Bunge Limited (US), Ag Processing Inc. (US), Cargill Inc. (US), LANXESS (Germany), Vertec BioSolvents (US), Eco Safety Products (US), and Elevance Renewable Sciences, Inc. (US).

The North American market accounted for the largest market share in 2018 and is projected to register a healthy CAGR in the coming years. This is largely attributed to the high production of soybean and stringent greenhouse emission regulations on the reduction of usage of fossil fuels. The US is the leading country in the region on account of high consumption of soy-based chemicals in food & beverages and biofuel applications. Moreover, the presence of major producers of soy-based chemicals such as Dow, Archer Daniels Midland Company, Cargill Inc., and BioBased Technologies LLC in the US is likely to propel the regional market growth. The Asia-Pacific market is estimated to grow at the highest CAGR during the review period owing to the presence of significant soybean farming in India and China. China is the major contributor in the region, which is followed by India, Japan, Thailand, and South Korea. Also, strong agrarian economies, large consumer base, growing demand for eco-friendly bio-fuels, and soy-based food products are some of the other factors further boosting the regional market growth. Europe held a substantial market share in 2018 owing to the high consumption of soy-based chemicals in personal care, food and beverages, and paper industries. Germany is the prominent country in the region on account of large automotive base and growing government initiatives for bio-fuels. Spain, Italy, France, and the Netherlands are other key countries in the region. The Latin American market is projected to grow at a notable CAGR on account of large plantations of soybean in Brazil and Argentina. The Middle East & Africa market is likely to grow at a sluggish CAGR owing to high production of fossil fuels and high raw material costs.

The global soy-based chemicals market has been segmented based on type, application, and region.

On the basis of type, the global soy-based chemicals market has been categorized as soy oil, fatty acid, polyols, soy waxes, methyl soyate, isoflavones, and others.

Based on application, the global soy-based chemicals market has been classified as paper, food and beverages, cosmetic and personal care, plastic and polymers, biofuel, and others.

By region, the global soy-based chemicals market has been studied for five key regions—Asia-Pacific, North America, Latin America, Europe, and the Middle East & Africa.Recent developmentJuly 2021-Nua, a women’s wellness company introduces Uplift, an advanced nutrition drink mix range for women, which helps replenish the vital minerals and vitamins during periods. Backed by extensive research, the nourishing drink mix has ingredients like soy isoflavones, Vitamin B, C, D, along with L-Theanine, Magnesium, inulin, and grape seed extract.November 2021-Archer Daniels Midland Company ADM has acquired a renowned European developer of non-GMO soy ingredients, called Sojaprotein. This move will be part of ADM’s efforts to foster the alternative protein segment to cater to the escalating preference for plant-based foods as well as beverages in Europe. This acquisition will be accretive to the brand’s nutrition segment. Other significant investments include setting up of a soy protein unit in Brazil, a joint venture with PlantPlus Foods, partnerships with Air Protein, and a pea protein plant in North Dakota.

At what CAGR is the soy-based chemicals market projected to grow during the forecast period?

What are the major applications of soy-based chemicals?

Some of the major applications of soy-based chemicals include biofuel, plastic and polymers, cosmetic & personal care, food & beverages, and paper.

What are the key factors driving the soy-based chemicals market?

Which factors may limit the soy-based chemicals market growth?

Allergies from soybean and availability of substitutes may limit market growth.

Who are the key players profiled in the soy-based chemicals market?

Soy-based chemicals Market: the Asia Pacific is estimated to be the fastest growing market during...