Smartphone-Controlled Drone Market has been growing significantly in the last few years. With the continuous evolution of drone technology, manufacturers are bringing in more advanced drones to the market every few months. Earlier drones were primarily used for military purposes, whereas they are now mostly are used for commercial and personal purposes. Currently, the use of drones operated by smartphones has increased drastically due to the drones are easy to control by using a smartphone. To fly drones using a smartphone, the user must download a mobile phone app and sync it with the drone. These apps are easily available for both Android phones and iOS users, which make such drones popular.

The advantage of smartphone-controlled drones over other drones is that these are extremely easy to use. They feature an HD camera that streams video to the user’s phone and is less expensive as compared to other drones. The restraints to this market are short per-battery flight time and difficulty in operating during poor weather conditions.

Smartphone-Controlled Drone Market is estimated to register the highest CAGR of around 18% during the forecast period, 2019–2025. 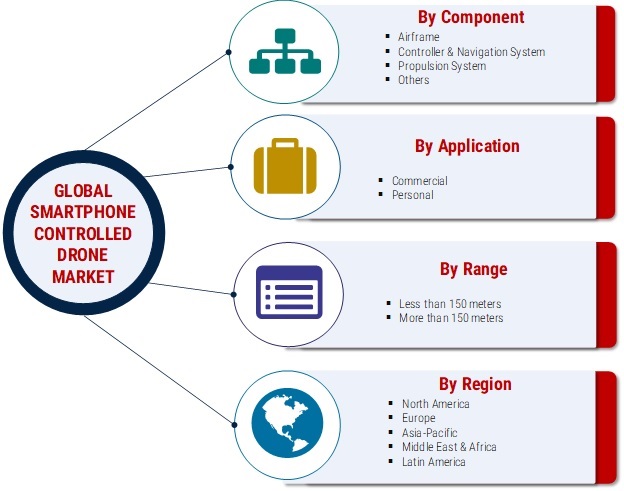 Based on application, the global market has been divided into commercial and personal. The personal segment is expected to record the highest CAGR during the forecast period. This is due to the increasing use of drones for personal use.

Based on region, the global market has been segmented into North America, Europe, Asia-Pacific, Latin America, and the Middle East & Africa. North America is expected to dominate the market during the forecast period. The North American market comprises the US and Canada. North America dominated the smartphone-controlled drone market in 2017, due to the increased applications of drones. The region leads the global market in terms of technological advancements, purchasing power, and has a large number of applications of drones, such as recreational photography & videography and drone racing & sports. Europe accounted for the second-largest market share in 2018. The key drivers for the market in this region are the increasing joint ventures and partnerships and rapid technological advancements. Asia-Pacific was a prominent market for smartphone-controlled drones in 2018. A key factor driving the growth of the market is the availability of low-cost drones in the region. In China, there are several smartphone-controlled drone manufacturers who are focusing on reducing the drone weight by using lightweight fiber materials, focusing on the aesthetic features and ergonomics of drones, and designing user-friendly drones.