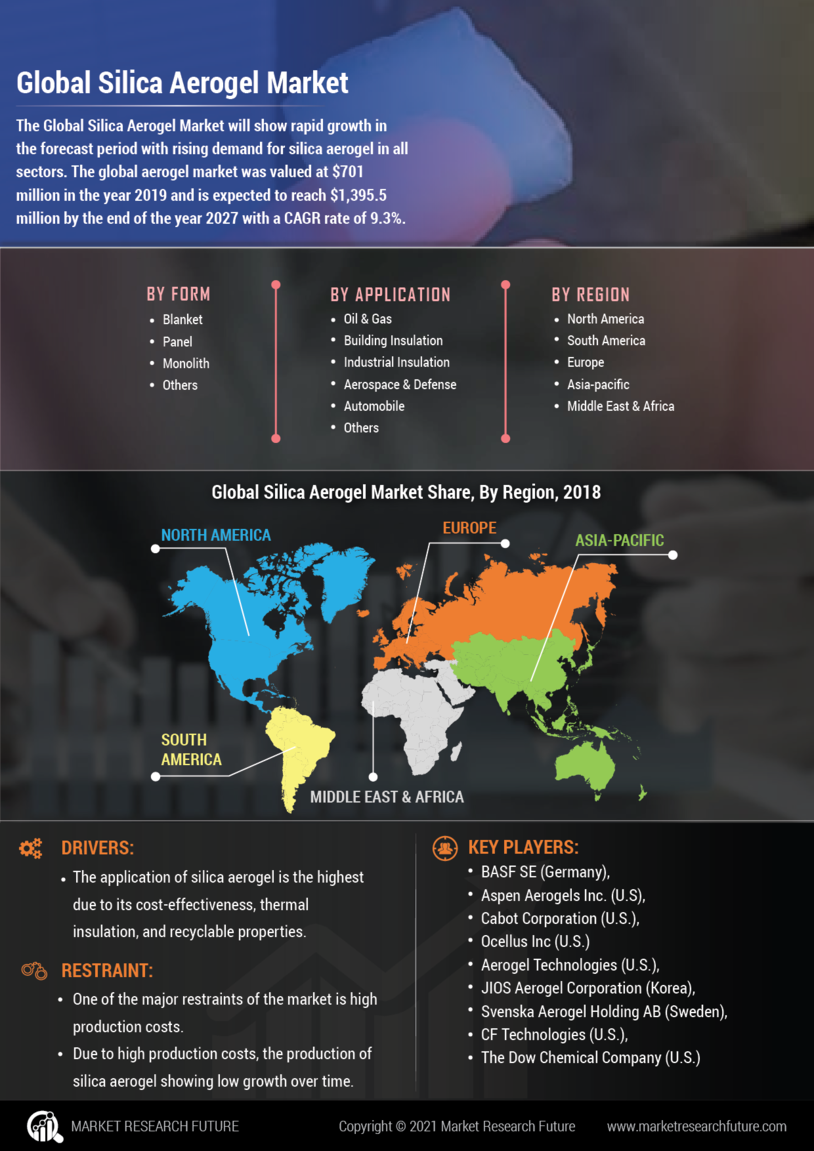 The Silica Aerogel Market will show rapid growth in the forecast period with rising demand for silica aerogel in all sectors.

Silica aerogels have created a lot of interest in both technology and science because of their optical transparency, low thermal conductivity, low bulk density, hydrophobicity, and high surface area. Aerogel is developed from the gel, and the liquid components of gel are replaced with that has, and there are many types of aerogel available in the market, such as silicon, polymers, and carbon.  But among these, silica is the most used aerogel with its various advantages and a wide area of application. The silica aerogel market is growing rapidly with increasing demand for it in many industries such as oil and gas, construction and buildings, aerospace and automotive industry, and performance coatings. Expansion of the construction and buildings sector has a huge impact on demand for silica aerogel in the forecast period.

In many regions, the government is focusing on developing the infrastructure, as well as the growing economy, and the financial condition of people has boosted the residential and commercial projects across all the regions in the globe.  Apart from the construction industry, silica aerogel has high application in the oil and gas industries. Silica aerogels help to reduce the thickness and give thermal resistance of aero materials, and it is showing a huge demand in oil and gas sectors where the primary importance is insulation. With the Increasing demand for silica aerogels in various sectors, the silica aerogel market is on the rise.  Aerogel price can be costly, but silica aerogel price is low and cost-effective. That is why many industries are using it.

The aerogel market was valued at $701 million in the year 2019 and is expected to reach $1,395.5 million by the end of the year 2027 with a CAGR rate of 9.3%. With advancements in material application in different areas, the silica aerogel market is expected to grow more in the coming years. Even this silica aerogel is solid, it is extremely lightweight, porous, low thermal conductivity, and is an ideal material to use in various Industries. Moreover, silica aerogel can be recycled after one use, and that is why is silica aerogel price is low and eco-friendly. This is why it is majorly applicable in different sectors.

As per the data, covid-19 was the main reason behind the downfall of the economy in many regions. Many business sectors suffered a lot from this pandemic. Both public and government sectors were facing financial crises due to the covid-19 pandemic. Due to social distancing guidelines and the imposition of lockdown in many countries, the businesses were shut down. Due to this, the production of products has stopped. The shortage of laborers was only one of the major reasons behind the low production. Due to all these factors, the aerogel market faced problems. The demand was low because construction work was stopped in many countries. Other sectors such as automotive, aerospace, and oil & gas sectors were also closed, so the demand for silica aerogel decreased. Overall covid-19 pandemic had a negative impact on the silica aerogel market. The key players of the market played a huge role in keeping the silica aerogel market demand high, and the aerogel market is expected to see positive growth in demand after the post-covid-19 situation.

The major players in the silica aerogel market are:

The global aerogel market is expected to see rapid growth during the forecast period owing to the increasing demand for aerogel in many sectors such as construction, electronics, aerospace, oil & gas, and automotive. Due to the huge demand, the global aerogel market was valued at $701.0 million in 2019, and it is expected to reach $1,395.5 at the end of the year 2027.

The silica market is divided on the basis of form, application, and region.

The major regions of the silica market are North America, Asia Pacific, Europe, and the rest of the world. All these regions have a huge demand for the silica market. Asia Pacific region is likely to dominate the market and is expected to grow at the highest CAGR during the forecast period. Countries such as India, China, and Japan are majorly contributing to the silica aerogel market growth in the Asia Pacific region. All these countries are showing rapid growth of urbanization that is attracting large and small vendors to invest in the market, and it is resulting in high market growth. Increasing infrastructure and the economy of people will also boost the market growth in this region.

December 2021- a Schenectady startup established by professors Mary Carroll and Ann Anderson’86, SunThru, is producing a silica aerogel insert for triple-pane windows, which is more cost-effective and energy-efficient as compared to conventional products. The firm is working on commercializing its insert using the help of two of its alumni. Aerogel refers to a very light material in weight, over 95 percent air.SunThru’s chief executive officer, Costa, said that the name aerogel could be a little misleading at the start as they are dry, rigid, or elastic foam-like materials. But the name is given because these aerogels are generally obtained from wet gels, which are physically similar to edible gelatin. A vacuum or gas substitutes the liquid ingredient in the aerogels to preserve the solid, sparse, porous backbone.February 2021 – a prominent player of high-performance, branded, and comfort footwear solutions, OrthoLite®, has launched an innovative new thermal insole technology, OrthoLite O-Therm™. O-Therm has set a new benchmark in cold-weather footwear protection by delivering all of the known benefits of open-cell PU-foam, while most insulative and light cold barrier protection across the globe. OrthoLite is the first company to launch open-cell, aerogel-infused PU foam. This latest technology makes a thermal barrier, which blocks the cold and maintains footwear temperature regulation.In September 2020, Aspen aerogels and BASF SE announced to grow their partnership by signing a supply agreement.

In July 2019, researchers from various space organizations revealed that there is a possibility of using silica aerogel in the future to create a habitable atmosphere on Mars.

Who are the major regions in the silica market?

What was the market value of the aerogel market in the year 2019?

Which region has the highest CAGR rate in the market?

Asia Pacific is growing at the highest CAGR rate in the market.

Who are the major key players of the silica aerogel market?

Growing consumption of silica aerogel in the application sector is estimated to drive the market ...