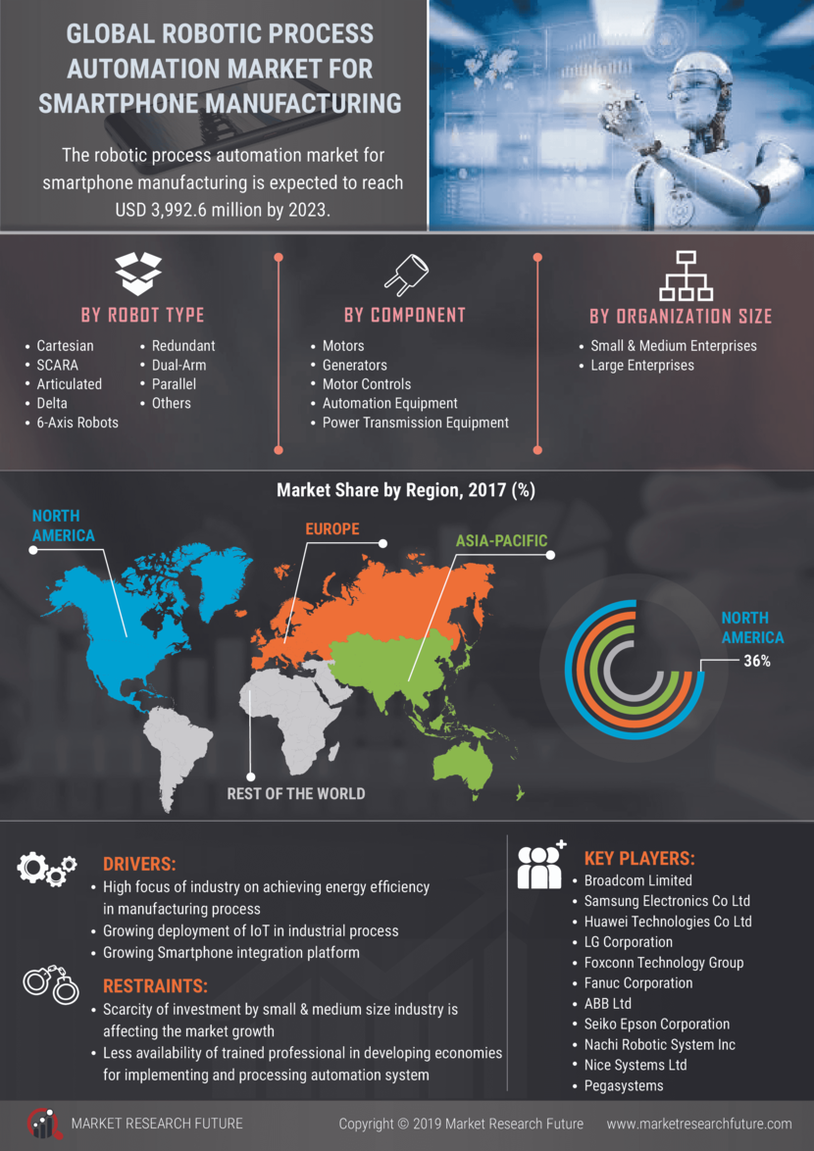 Robotic Process Automation for Smartphone Manufacturing Market will exhibit a CAGR of 30.5% in the forecast period of 2018 to 2023 and is expected to reach USD 3992.6 million by 2023.

Robotic process automation is the emerging trend in the manufacturing and industrial sector as it assists them in improving their operational efficiency. By installing robotic process automation, it becomes easy for the companies to produce products in huge quantity at a lower cost with fast speed. With the increasing demand of smartphones by consumers has attracted high growth in smartphone manufacturing companies. Innovation in the mobile interface, which is connected with digital technology, including social media usage, and growing app market is creating high demand for smartphones worldwide. This growing demand for smartphones penetrating the mobile platform manufacturers to integrate more and more features into smartphones to make customers life easy and secure than earlier.

Based on the robot type, the market has been classified as cartesian, SCARA, articulated, delta, 6-axis robot, redundant, dual-arm, and parallel. The 6-axis robots segment accounted for the largest market share in 2017, with a market value of USD 168.7 million; it is expected to register the highest CAGR during the forecast period. The SCARA segment was the second-highest valued segment during the forecast period. A cartesian robot or cartesian coordinate robot is a 3-axis robot which performs the linear motion along any of the axis which is marked perpendicular to each other. The SCARA, also termed as selective compliance assembly robot arm is based on a 4-axis design whose z-axis is kept fixed and can move in the XY axis allowing the benefit to perform the curved motion. An articulated robot is a rotational joint robot able to perform the circular motion. It has a one fixed leg and many joints which are individually powered by the electric motors. A delta robot is a type of parallel robot which has one base connected with the 3-axis with universal joints. The 6-axis robots have six axes such as a base, allowing the robot to move from left to right, allowing forward and backward motion, enabling the vertical motion, wrist roll (rotating the upper arm in a circular motion), pitch and yaw motion, twisting motion.

The changing consumer market has built a high need for deployment of technically advanced automation process in the manufacturing and production process of an industry. Flexible production system with high-end IT-enabled process provides fast and safe production process which is efficient, flexible, reliable, and cost-effective solution. The economic pressure which affects performance and growth of an industry is one of the factors behind utilizing industrial automation process. The various factors attributing to the growth of global robotic process automation for smartphone manufacturing market are the high focus of industry on achieving energy efficiency in the manufacturing process, growing deployment of IoT in the industrial process, and growing smartphone integration platform. Furthermore, scarcity of investment by small & medium size industry and less availability of trained professionals in developing economies for implementing and processing automation system are affecting the market growth during the forecast period.

What is the valuation of the global market?

The global robotic process automation for smartphone manufacturing market is expected to rise to a valuation of USD 3.99 billion by 2023.

The global robotic process automation for smartphone manufacturing market is expected to exhibit a strong 30.5% CAGR over the forecast period from 2018 to 2023.

The growing demand for smartphones is the major driver for the global robotic process automation for smartphone manufacturing market.

What are the major players in the market?