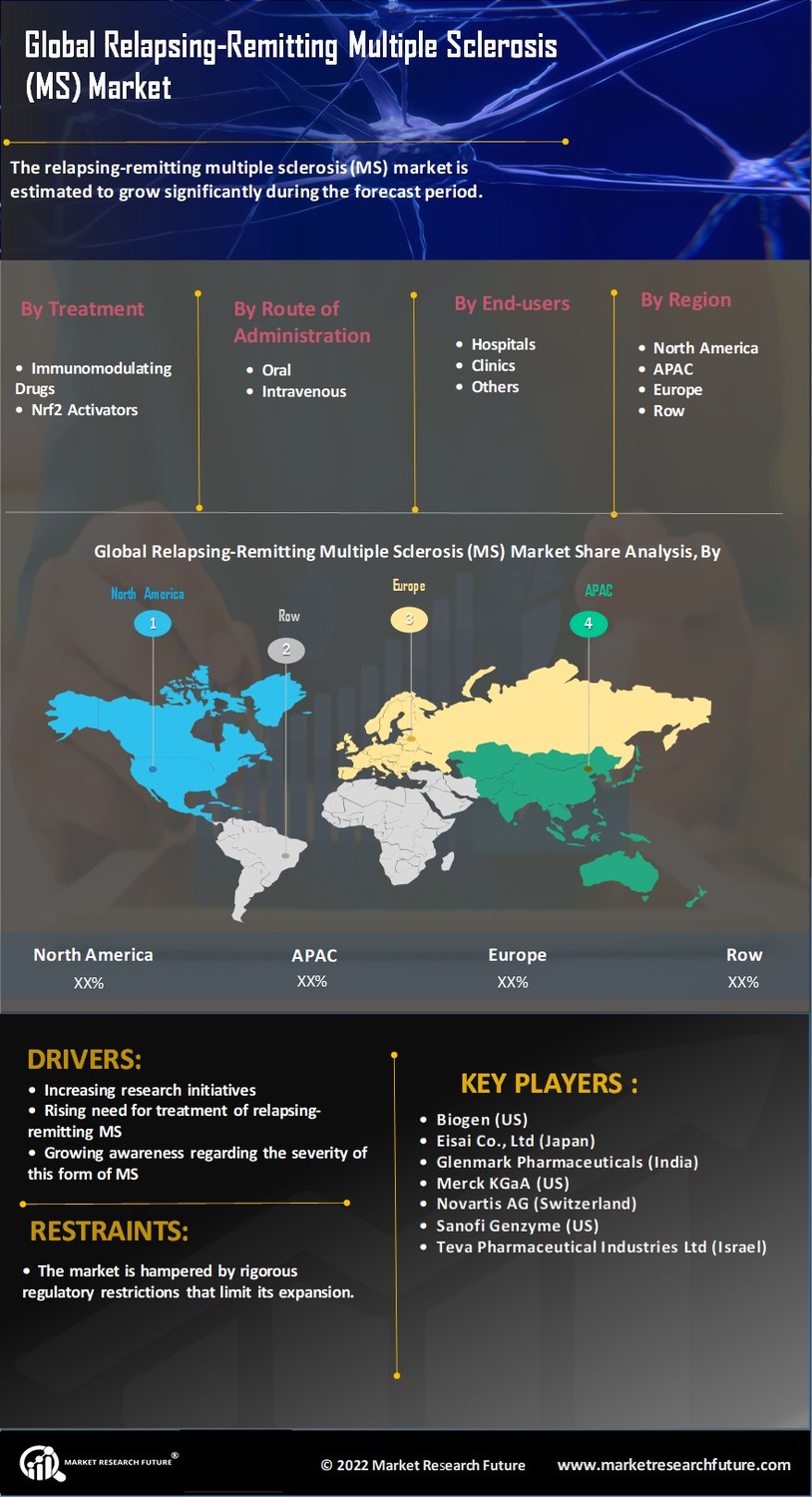 According to the latest research reports, the Relapsing-Remitting Multiple Sclerosis (MS) Market size reached a total value of USD 4,976 million in 2018, growing at a compound annual growth rate of a CAGR of 3.1% between 2019 and 2025. Multiple sclerosis, specifically relapsing-remitting multiple sclerosis, is a type of disease. It will be the most frequent kind of multiple sclerosis, contributing to approximately 85 percent of all new MS diagnoses in the United States. People who have RRMS have relapses of MS, with recovery periods happening in the intervening time. A chronic, degenerative disorder of the central nervous system wherein the human immune system assaults myelin, the insulating covering surrounding nerve fibers, multiple sclerosis is defined as follows: An inflammatory response in the nerves is caused by myelin damage, making it harder for your mind to communicate with the entire body.

In the last few decades, there has also been a significant amount of study into the Relapsing-Remitting Multiple Sclerosis Market, which is having an impact on the worldwide market's development. A large number of businesses are now undergoing clinical studies for their medication concepts, which, if authorized, would accelerate the pace of success in the market. Global MS medication sales have recently been propelled by a combination of factors, including a large unmet medical demand for treatments and an active R&D pathway. As a result, the worldwide MS medications market has grown as a result of an increase in MS research and development.

COVID-19 has resulted in a financial and healthcare disaster in the United States. It is expected that industrialized nations would endure a downturn as a consequence of the COVID-19 epidemic, which has stressed the global medical system. There has been a 50 to 70 percent decline in healthcare income since March due to the epidemic. One or two smaller medical facilities have been compelled to close their doors. There have also been delays in elective surgeries due to social isolation and municipal curfews. The tourism industry has been interrupted by visa denials, which might harm expanding the relapsing-remitting MS sector.

The worldwide relapsing-remitting multiple sclerosis market is growing because of an elderly society. One in six individuals in the globe will be 65 years and older by the year 2050, as per new research. An estimated one in every four persons in Europe and North America would be impacted. This age range had already overtaken the number of kids under five in 2018. Due to an increasingly aging population, relapsing-remitting MS drugs are predicted to have an upsurge in demand.

According to recent research, monoclonal antibodies are progressively being used in the diagnosis of RRMS. A large number of clinical studies are being conducted on innovative medications that are based on antibodies. In order to address this illness, there is a rise in the need for immunosuppressive medications.

The patent expiration of essential medications, on the other hand, is a significant limitation on the worldwide market for MS treatments. Moreover, the worldwide Relapsing-Remitting Multiple Sclerosis (MS) Market outlook is hampered by rigorous regulatory restrictions that limit its expansion.

Owing to greater government involvement and the availability of a range of therapeutic choices for multiple sclerosis, the expense of medications continues to be a significant barrier to the market's expansion.

The increasing number of agreements entered into by major companies in the business is encouraging. Examples include TG Therapeutics, Inc. entering into a settlement with the United States Food and Drug Administration on the Special Protocol Assessment (SPA) of phase iii clinical research for TG-1101, an anti-D20 monoclonal antibody being studied in the management of relapse types of MS.

Expanding the number of medications in development pipelines. Antisense Pharmaceuticals confirmed the continuation of its Phase 2b clinical studies in October 2017, after the US Food and Therapeutic Administration removed the regulatory holds on the company's drug candidate ATL1102. It is intended to treat relapsing-remitting multiple sclerosis and secondary progressive multiple sclerosis.

According to the reports, the global Relapsing-Remitting Multiple Sclerosis (MS) Market is segmented based on the treatment, route of administration, end-users, and regions. Immunomodulatory drugs inhibit an enzyme in the mitochondrial that creates pyrimidines to provide anti-inflammatory actions. Teriflunomide, for example, is used to treat relapsing types of multiple sclerosis. Nrf2 Activators is anticipated to witness the fastest Relapsing-Remitting Multiple Sclerosis (MS) Market growth category because of the higher survival rate of cancer patients. Studies reveal that Interferons reduce the risk of MS relapses by an average of 18 to 38 percent. Dimethyl fumarate is one of the therapeutic goods in the other sector. As so many medications need to be delivered orally, this is projected to be the most significant market sector. Because of increasing research in this subject, the intravenous segment is likely to develop the quickest.

The market is segmented based on the treatment, route of administration, end-users, and regions. The global Relapsing-Remitting Multiple Sclerosis (MS) Market trends are expected to witness decent growth during the forecast period.

The application market is segmented into Immunomodulating Drugs, Nrf2 Activators, Interferons, and Others.

Based on the propulsion types, the market is segmented into Hospitals, Clinics, and Others.

According to the reports, based on region, the global Relapsing-Remitting Multiple Sclerosis (MS) Market is divided into America, Europe, Asia Pacific, and the middle east and Africa. The Americas is expected to be the most significant regional market. Research facilities in nations such as the United States and Canada are well. Furthermore, the key enterprises that have been developed in this location have superior manufacturing skills. Consequently, the relapsing-remitting MS industry in this area is expected to rise in the coming years. Furthermore, the growing number of patients is having an impact on development. For example, over 400,000 individuals in the United States have multiple sclerosis.

Research funding increased occurrence rates of multiple sclerosis, and improvements in the healthcare system are all predicted to contribute to expanding the relapsing-remitting MS market within the European area. For example, the maximum count of MS sufferers in Germany is around 200,000.

The rising number of efforts by both governments and enterprises is helping to propel the development of the Relapsing-Remitting Multiple Sclerosis Market. According to the forecast, the growing percentage of product releases by leading competitors in the field is expected to be a significant supporting element to the rise in the coming years.

What was the valuation of the Relapsing Remitting Multiple Sclerosis Market in 2018?

What is the projected CAGR of the Relapsing Remitting Multiple Sclerosis Market during the forecast period (2019-2025)?

The projected CAGR of the Relapsing Remitting Multiple Sclerosis Market would be 3.1% during the forecast period.

Which route of administration would dominate the Relapsing Remitting Multiple Sclerosis Market?