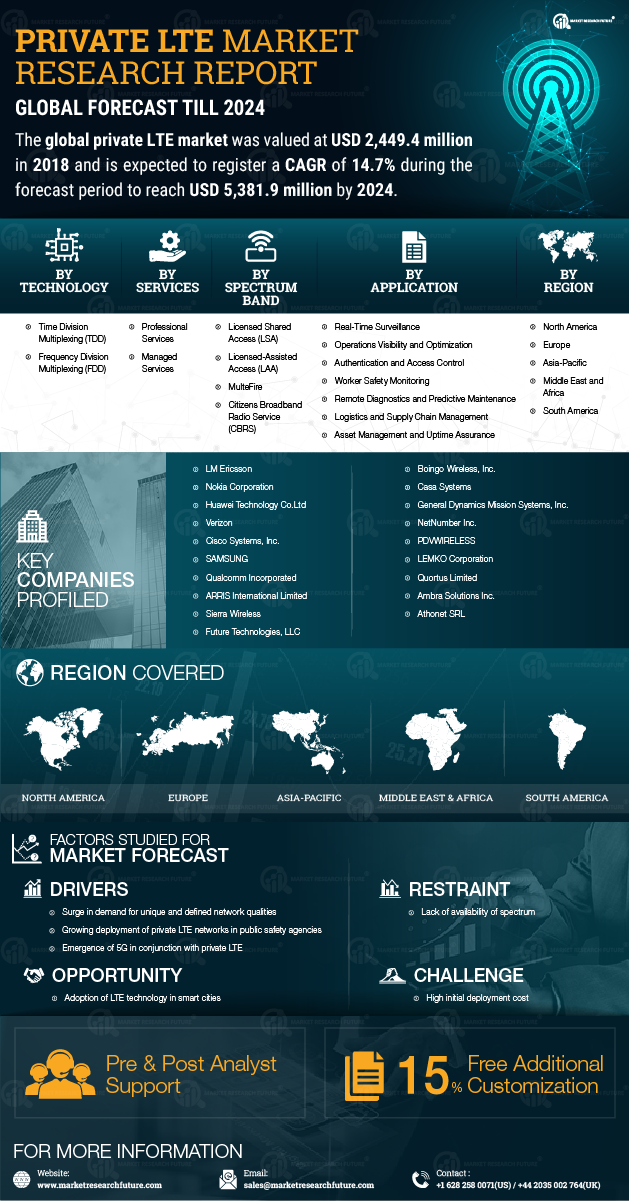 Private LTE Market Synopsis:
A private LTE network differs from conventional networks that use connectivity technologies such as Ethernet, and Wi-Fi that offer secure and reliable communications. The private LTE networks enables connectivity for human and machine communications through a single, reliable network that communicate through portable radios and provide new revenue streams for Internet of Things (IoT)-enabled devices.

Advancements in mobile communication technology through the expansion of 4G networks have significantly transformed companies, enterprises, and cities across the world. This has increased the need for dedicated high network capacity and high speed 4G mobile communications capabilities that are provided by the private Long Term Evolution (LTE) networks. These networks enable the enterprises to enhance their operational efficiency and provide innovative network solutions; this eventually increases the need for high quality of services (QoS) to the end-user.

Companies such as Nokia Corporation, LM Ericsson and Qualcomm Technologies Inc. are deploying dedicated private networks for enterprises. For instance, Nokia offers MulteFire and CBRS small cells that allow enterprises to deploy their own private LTE networks. The company provides vMEC a private LTE solution to enterprises that enabled them with edge cloud low latency applications that include analytics, push-to-talk and push-to-video, IoT management, and video orchestration. 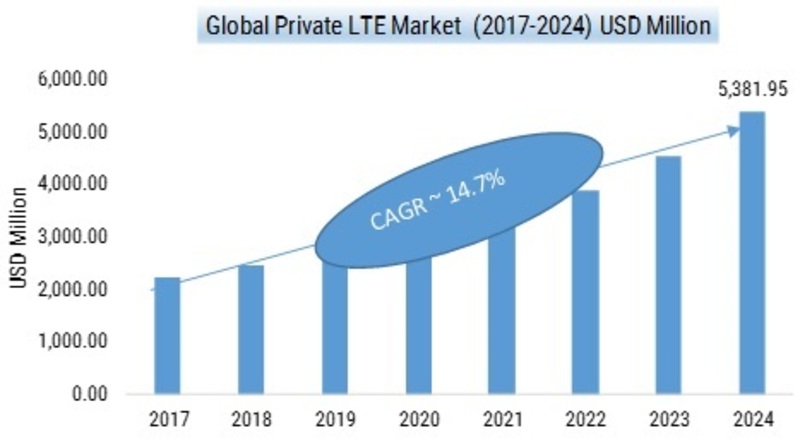 
Private LTE Market Competitive Analysis:
Most of the vendors operating in the private LTE market are majorly from Europe and the US; these have formed two alliances—Citizens Broadband Radio Service (CBRS) alliance and Multefire alliance. These alliances have been significantly working on licensced and unlicensced spectrum to provide private LTE solutions. Additionally, the vendors profiled follow both organic and inorganic appraoches for offering high-end private LTE solutions for law enforcement agencies, public safety agencies, enterprises and others. For instance, Under these alliances, SAMSUNG and LG are also aiming at recieving approval from the regulatory bodies to deploy CBRS in their smartphone devices such as Samsung Galaxy S10 and LG G8 ThinQ.

Apart from these, some other vendors that operate in private LTE market include LEMKO Corporation (US), PDVWIRELESS (US), Quortus Limited (UK), Ambra Solutions Inc. (Canada), Zinwave (US), Athonet SRL (Italy), Mavenir (US), and Star Solutions (Canada).

North America accounted for the largest market share in 2018. Europe achieved second spot in the private LTE market in terms of market share during the assessment period. However, Asia-Pacific is expected to be the fastest growing market during the forecast period.

North America dominated the global private LTE market in 2018 and expected to dominate the market during the forecast period.  The market growth is attributed to rising developments by the vendors to develop high-end LTE solutions and increasing government initatives to provide CBRS spectrum for the vendors to deploy networking solution for government, commerical and public safety agencies.

Asia-Pacific is expected to be the fastest growing segment in the private LTE market during the assessment period. The market growth is attributed to the rising government initatives to develop smart cities and heavy investments by the vendors such as China Telecom, China Mobile, and NTT Docomo to offer a robust network services to the end users.

At what CAGR can the private LTE market expand?

What is the estimated valuation for the private LTE market?

Who are the key players of the private LTE market?

Sierra Wireless (Canada), ARRIS International Limited (US), and Future Technologies, LLC (US) are some reputed names in the private LTE market.

What is the applications of private LTE?

operations visibility and optimization, real-time surveillance, and authentication and access control are some of the applications of private LTE.

What is the regional analysis of the private LTE market?

The high rate of adoption of private LTE by the IT industry can propel the North America market.

The deployment of private LTE networks in public safety agencies, adoption of LTE technology in smart cities applications, and emergence of 5G in conjunction with private LTE. On the other hand, the lack of availability of spectrum is expected to hinder the growth of the private LTE market.