Potash ore is the primary raw material used for the production of potash, compound fertilizer, and other chemicals. It consists of sylvite (KCl), halite (NaCl, which is also known as a rock forming mineral), various other components such as carnalite, anhydrite, silica, carbonate residue, and others. It is manufactured by both chemical and mechanical methods, such as hot leaching and flotation respectively. The hot leaching method depend upon physical properties of potassium chloride, sodium chloride, and water, whereas floatation method relies on the surfaces of sylvite, halite that is dampened by water and addition of chemicals as surfactants. Due to these factors, they are used in various applications such as agriculture, chemical, metallurgical, and others.

Among the various segments of the market, the potassium chloride segment holds the major portion due to its growing consumption in the production of fertilizers in the agricultural sector. It is also widely used in the development of fruits, plants, and others. Due to these factors, this segment is expected to continue its dominance and set to drive the market growth over the assessment period. It is projected that the sodium chloride segment is set to grow at a significant rate owing to its growing consumption in chemicals for the production of caustic soda, sodium chlorite, and others. Additionally, the growing demand for the product in preserving fish, . The market by application is segregated into agriculture, chemical, metallurgical, and others. The agriculture segment holds a majority of the market due to extensive use of the product in producing fertilizers, and others. Moreover, the growing demand for the product in chemical, and metallurgical sectors is set to grow at a higher CAGR during the forecast period. 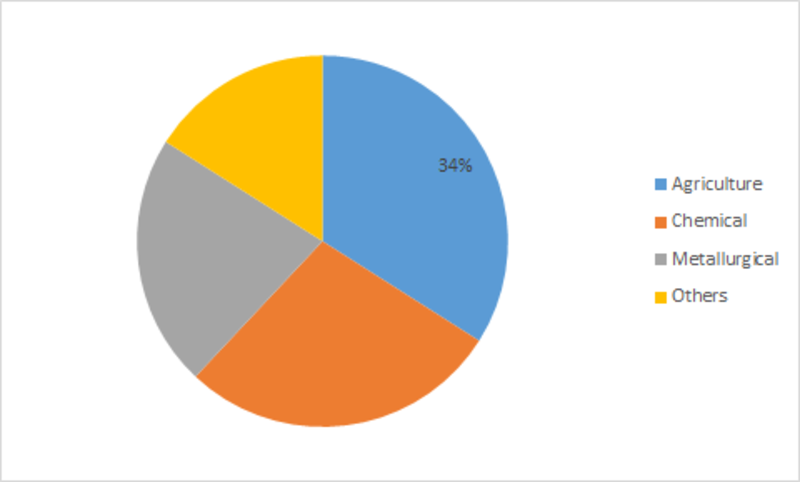 List of Key Players in the Potash Ore Market

The Potash Ore Market is segmented across five regions: Asia Pacific, North America, Europe, Latin America, and the Middle East & Africa. Among these, North America holds a major share of the market due to the growing consumption of the product in agriculture, chemical, metallurgical, and others. The increasing demand for organic food and its extensive use in end-use industries have propelled the region to witness a higher growth over the assessment period. Countries such as the U.S., Canada and Mexico are the major players in this market.

The Asia Pacific region is growing significantly in the market due to rapid urbanization coupled with technology. It is predicted that growing investments in the end-use industries is likely to drive the market in the region during the forecast period. The growing population, rising demand for hygienic food and increasing disposable income have propelled the countries such as China, Japan, and India to achieve a stunning growth in the market during the forecast period.

The European market has also observed a remarkable growth due to increasing demand for the product in agriculture, chemical, metallurgical, and other sectors. The market has been driven by the growing organic farming and an increase in the number of food stores. It is estimated that the growing innovation and technological advancement are predicted to propel the market growth in countries such as the U.K, Italy, Germany, and France over the forecast period.

The Latin American region is estimated to witness a significant development in the market due to growing agriculture industries, and demand for organic food products in numerous hotels, restaurants, and others. Moreover, the Middle East & Africa is anticipated to witness a notable growth in the market due to growing research & development activities of potash ore and rapid demand of fertilizers in the region.

July 2021- a leading global technology company, HCL Technologies (HCL), has disclosed signing a five-year global agreement to offer managed services and digital transformation to The Mosaic Company. The Mosaic Company is one of the prominent miners of potash and phosphate and is listed in Fortune 500 company list. According to the agreement terms, HCL will transform and manage Mosaic’s global application and infrastructure environments to improve the firm’s responsiveness and capability to drive growth in the marketplace.

HCL will install a scaled Agile/DevSecOps delivery model in the American region to offer process-led transformative services in applications, business, and infrastructure analytics environments as an element of this effort. According to HCL, this partnership capitalizes the company’s focus in the mining, agriculture, and chemical segments.

June 2021- Mosaic potash disclosed its plans to add a waste pond to its mining operations in Eddy County, and federal officials seek out input on environmental dangers. The firm looked out to boost its Carlsbad operations in 2020 by growing its tailings management system to add an extra pond for clay settling in the area.
Mosaic is one of the two firms in the Carlsbad area.

Which regional potash or market has the highest market share?

The North American market has the highest market share.

What is the potash ore market’s application?

Its applications are chemical, metallurgical, agriculture, and others.

What would drive the Asia Pacific potash ore market?

The Asia Pacific potash ore market would benefit from urbanization and the inclusion of technology.

What would trigger the North American potash ore market growth?

The market can find rising organic food demand as a major driving factor.

Potash Ore Market to be Driven by the Growing Demand from the End-Use Industries during the Forec...