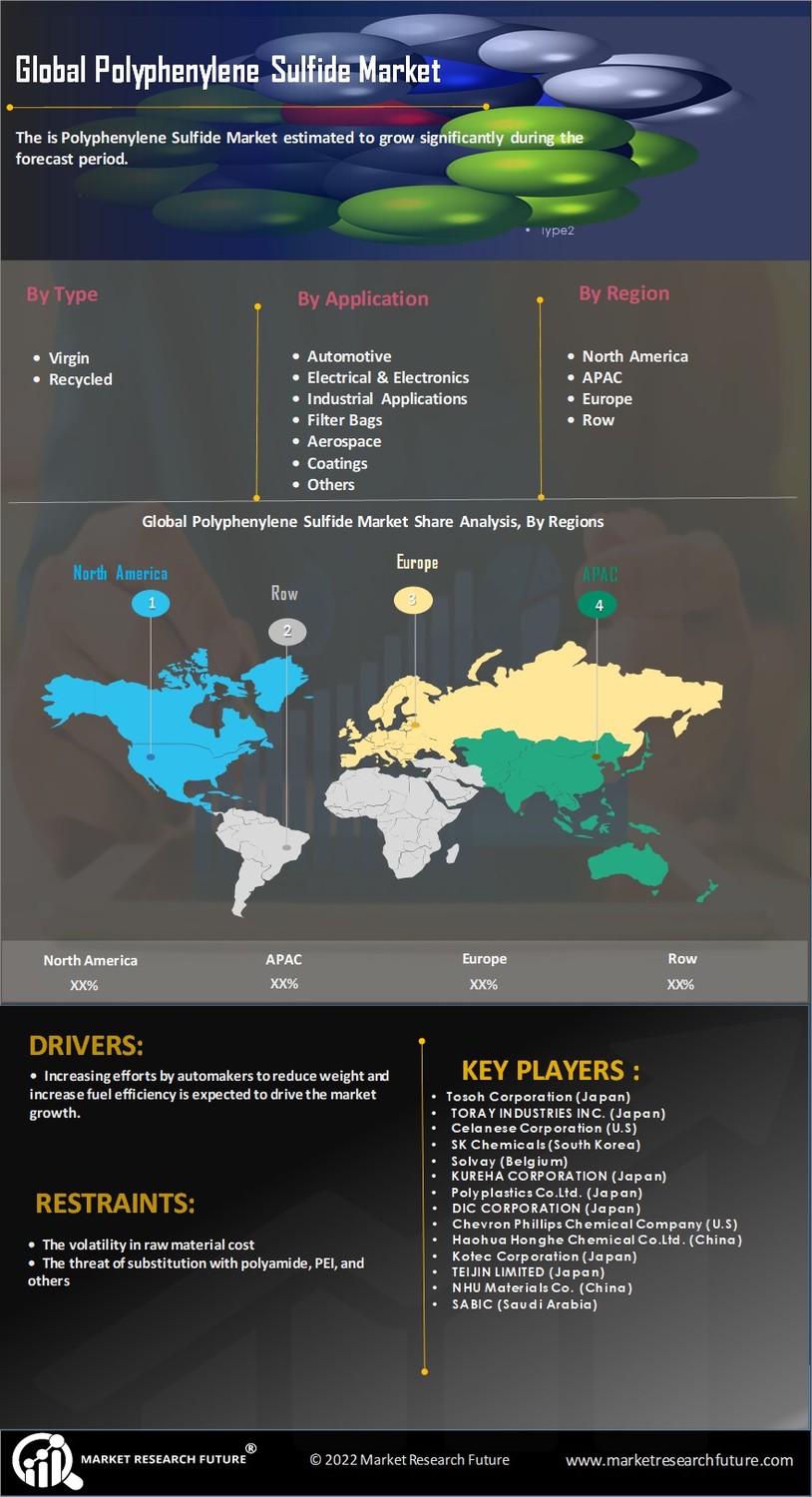 Polyphenylene Sulfide Market Overview Polyphenylene Sulfide Market is projected to be worth USD 2.26 Billion by 2030, registering a CAGR of 5.3% during the forecast period (2022 - 2027). Polyphenylene Sulfide Market is a high-performance thermoplastic with exceptional easy moldability, flame retardant, and chemical resistance. They are used with a wide range of temperatures. Increased advancement in the automotive and, electrical & electronics industries is driving the PPS market worldwide. Germany is known as the birthplace of automobiles and is a leader in producing passenger cars in Europe. Polyphenylene sulfide (PPS) is generally used in the automotive industry because of its remarkable mechanical properties, such as impact resistance, resistance to abrasion, scratch resistance, thermal stability, easy moldability, and excellent appearance. The U.S. in North America was the largest market for passenger cars in terms of value. PPS’s exceptional properties drive its demand in manufacturing passenger car components.  Patents are recognized as valuable assets for the companies. They are submitted to protect the newly originated technologies. The highest number of patents related to polyphenylene sulfide (PPS) was registered in 2014. The increased advancement in the automotive and electrical, and electronics industries and PPS’s exceptional properties such as lightweight, heat resistance, tensile strength, and electrical conductivity led to a rise in the demand for polyphenylene sulfide (PPS) from companies and helped further to use their PPS products in more applications and develop new profitable products. Thus, companies innovate and get their innovations and technologies patented to stay ahead of the technology curve.

Market Overview: Polyphenylene sulfide (PPS) is an organic, semi-crystalline polymer containing aromatic rings attached to sulfide. Polyphenylene sulfide exhibits features such as high chemical resistance, thermal resistance, flame retardant, electrical conductivity, low moisture absorption, low viscosity, recyclability, and dimensional stability. PPS is filled with fillers and fibers to overcome the brittleness, which increases the overall cost. It is 100% recyclable and environment-friendly, which makes it an effective solution to the carbon emission issues concerned with other polymers. This property is likely to increase the product demand from the automotive and electrical industries during the forecast period. PPS is widely applicable in the aerospace industry such as ducting, panels, seat frames, and fasteners. The demand for PPS is expected to increase in the automotive sector owing to its application in carburetors, coolant systems, pistons, ignition parts, and others. It is an excellent substitute for heavy metals such as steel, bronze, aluminum, and others. Thus, increasing efforts by automakers to reduce weight and increase fuel efficiency is expected to drive the market growth.

The growing product development for applications such as cooking appliances, hair dryer components, and others has positively favored the market growth. The filter bag produced using PPS is one of the best filter materials available, which is used in thermal, steel, iron, chemical plants, and others. Furthermore, growing demand for the product in the manufacturing of healthcare and laboratory equipment is likely to fuel the market growth. The increased usage of the product in chemical processing and food processing equipment such as heat exchangers and non-stick cookware respectively are anticipated to drive the market growth during the review period. For instance, Celanese Corporation introduced latest compounds namely Celstran High Flow LFT, Hostaform M25IE POM, Fortron Flexible PPS, Celapex High Flow PEEK, and MetaLX wherein; flexible PPS is consumed for fasteners, clips, tubes, and cable ties. This material can also be used for complex automotive and industrial systems due to its high durability and heat resistant nature. Similarly, DIC corporation introduced a new PPS Compound ‘LP-150-LDS’ which is used in molded interconnect device (MID) for the formation of circuits on 3D molded compounds built by direct laser structuring (LDS) technology. Furthermore, with new innovation and development in technology, companies can achieve a sustainable growth. However, the volatility in raw material cost and the threat of substitution with polyamide, PEI, and others are likely to slow down the market growth. 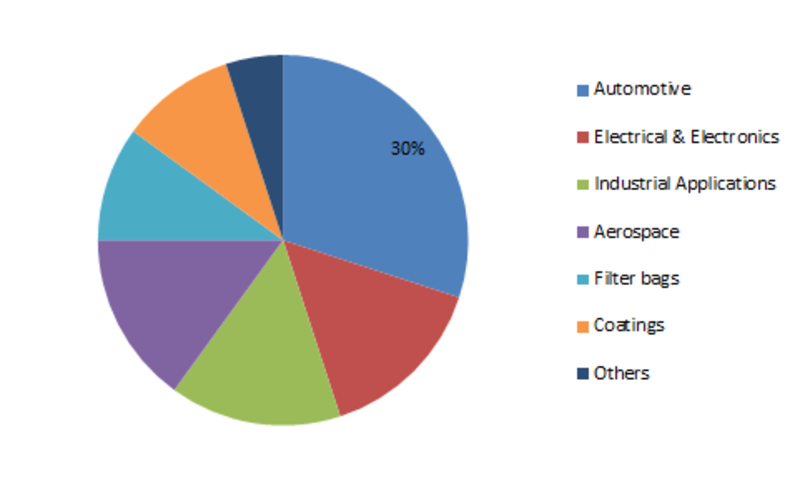 The global polyphenylene sulfide market is spanned across five key regions namely Asia Pacific, Europe, Latin America, North America, and the Middle East & Africa. The Asia Pacific is anticipated to show a considerable growth due to the presence of a large number of automotive, electrical & electronics, and coating sectors in India, China, and Japan. The presence of automotive manufacturing bases such as Honda, Nissan, and Toyota coupled with increasing demands for sedans and SUVs are projected  fuel the market growth in this region. Countries such as Thailand and South Korea are major contributors to the market growth due to the high production of automobiles.

North America is expected to witness a significant growth on account of the automobile industries along with the expanding aerospace sector. The technological advancements and increasing investments will be advantageous to the market growth. The demand for commercial aircraft is anticipated to rise in emerging economies due to the high focus on regional connectivity. European region has witnessed stagnant growth owing to limited production application in coal and thermal plants along with stringent regulation of government. Latin America is another substantial region propelling the market growth due to the growing automobile sector, especially in Mexico.Recent Development

What are the key players of the polyphenylene sulfide market?

Name the major driver of the global polyphenylene sulfide market?

The growing product development for applications such as cooking appliances, hair dryer components, and others has positively favored the market growth.

Which region can dominate in the global polyphenylene sulfide market?

The Asia Pacific is anticipated to show a considerable growth due to the presence of a large number of automotive, electrical & electronics, and coating sectors in India, China, and Japan.

Polyphenylene Sulfide Market Is Estimated To Grow At A Significant CAGR During The Forecast Perio...