Palliative Care Market Research Report: Information By Condition (Cardiovascular, Diseases, Cancer, Chronic Respiratory Diseases, and others), By Age Group (Adult and Pediatric), By Provider (Hospitals & Clinics, Nursing Homes, and others), and Region (North America, Europe, Asia-Pacific, and the Rest of the World)—Forecast till 2030 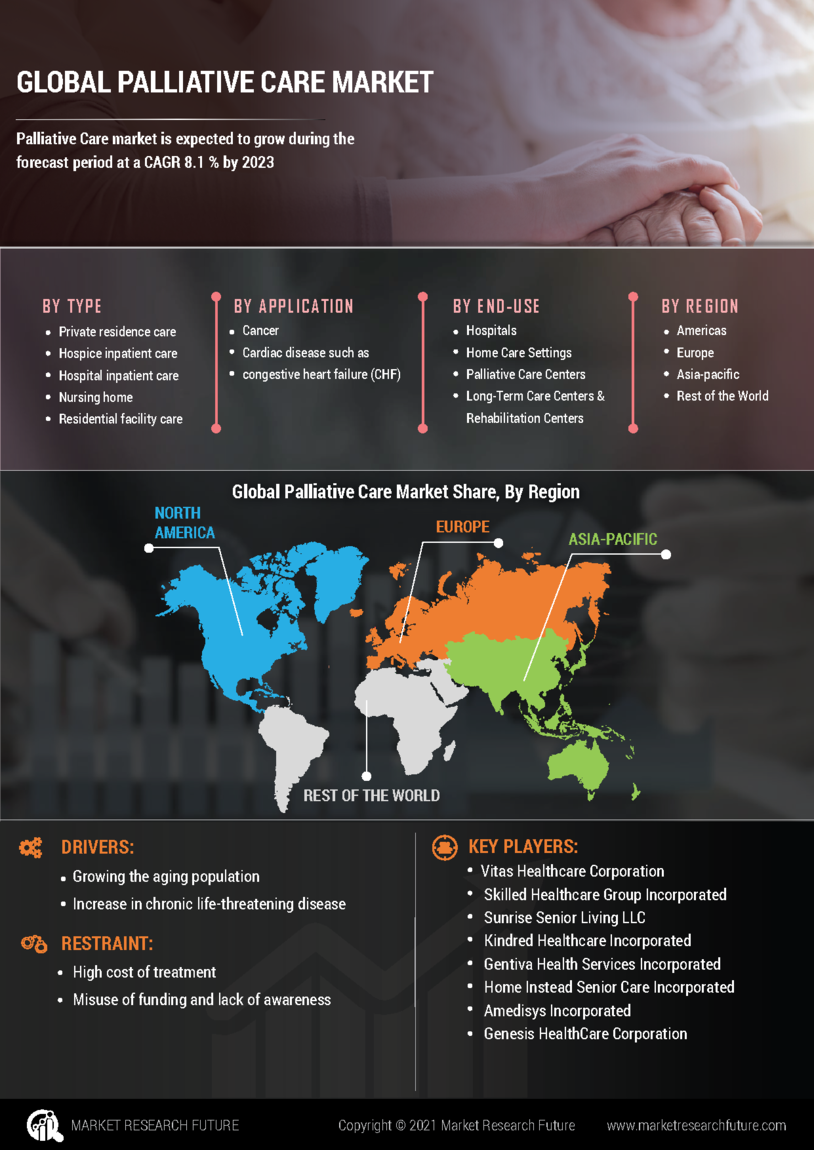 The Palliative Care market is expected to reach USD 10.815 Billion by 2030 at 7.90% CAGR during the forecast period 2022-2030. Palliative care is given to improve the quality of life of patients who have a serious or life-threatening disease such as cancer and helps them feel more comfortable with their treatment. Palliative care may be provided to the patient in the hospital, a long-term care facility, an outpatient clinic, or at home under the supervision of a medical professional. The increasing incidence of life-threatening diseases such as cancer and cardiovascular diseases drives the global palliative care market. According to GLOBOCAN, 19.3 million new cancer cases and almost 10.0 million cancer deaths occurred in 2020. This increasing incidence of cancer is creating a need for palliative care for these patients. The American Society of Clinical Oncology recommends that advanced cancer patients receive palliative care. The patients who pair palliative care with their cancer treatment have a better quality of life than those who do not receive such care.


According to the Department of Economic and Social Affairs, there are an estimated 727 million people aged 65 years or over worldwide. It is also projected that this number will be more than doubled by 2050, reaching over 1.5 billion people. The European Union Geriatric Medicine Society and European Association for Palliative Care have jointly called for every older citizen with chronic disease to be offered the best possible palliative care approach wherever they are cared for. The aging population tends to have a higher prevalence of chronic diseases such as cardiovascular diseases, cancer, and neurological diseases. According to WHO, between 2015 and 2050, the proportion of the world's population over 60 years will nearly double from 12% to 22%. Palliative care assists the elderly in reducing hospital visits, focusing on the body, mind, and spirit, providing pain and symptom control, and assisting patients and families in understanding treatment plans. 
The hospital inpatient care segment held the largest market share of 24.47% in the global palliative care market in 2020, owing to the increasing prevalence of life-threatening chronic diseases, rise in geriatric population, and favorable government initiatives. The hospital inpatient care segment is expected to witness highest CAGR during the forecast period from 2022-2030.


Hospice inpatient care focuses on improving the quality of life for people with advanced, life-limiting illnesses and their families. The major difference between general palliative care and hospice care is that palliative care is provided alongside the treatment for the diseases; however, disease treatment is halted during hospice care. This type of treatment is not given to everyone suffering from a life-threatening disease but to people expected to live for around six months or less.


Nursing homes segment is driven by the increasing number of residents in nursing homes. For instance, according to the Centers for Disease Control and Prevention (CDC), by 2030, the nursing home resident population is expected to reach around 3 million in the US.


Residential care facilities are private facilities that house around 20 or lesser residents. The palliative care provided in such facilities is referred to as residential facility care. However, resident facilities do not provide access to nursing and medical care on site, which might be a disadvantage for certain people that require such services around the clock. Experienced healthcare professionals and nurses come in at arranged times during the day in order to provide palliative care treatment to the patients.


Homes are still one of the most preferred places for patients suffering from life-threatening diseases to receive end-of-life care. Highly competent and specialist nurses are required to provide the same effective care in homes as provided in hospitals and nursing homes.


About 6.2 million adults in the United States had heart failure in 2018 and In 2018, heart failure was mentioned on 379,800 death certificates. Large number of patients experiencing heart failure globally is expected to increase demand for palliative care.


According to Global Cancer Statistics 2020, an estimated 19.3 million new cancer cases were recorded worldwide in 2020. It is expected to increase to 28.4 billion cases by 2030, a 47% increase from 2020 levels. This rise in cancer cases will drive demand for palliative care, augmenting growth of the market.


The cause of COPD is usually long-term exposure to irritants that damage your lungs and airways. According to the WHO’s fact sheet, COPD is the third leading cause of death worldwide and was responsible for 3.23 million deaths in 2019


According to Chronic Kidney Disease in the United States, 2021 by Centers for Disease Control and Prevention, More than 1 in 7, that is 15% of US adults or 37 million people, are estimated to have chronic kidney disease. In England, according to a recent report published by NHS Kidney Care, chronic kidney disease costs more than breast, lung, colon and skin cancer combined.


Nearly one million people in the US are living with Parkinson's disease, which is more than the combined number of people diagnosed with multiple sclerosis, muscular dystrophy and amyotrophic lateral sclerosis. The number of patients suffering from Parkinson’s disease is expected to rise to 1.2 million by 2030.


ALS is a rare neurological disease that primarily affects the nerve cells responsible for controlling voluntary muscle movement. Although the symptoms of ALS can begin at any time in adulthood, they most commonly manifest in individuals between 55 and 75 years old.


Hospitals & clinics are the preferred choice of treatment for palliative care. The availability of reimbursement facilities on in-patient basis in most developed countries is expected to support growth of this segment.


Palliative care is provided in different settings based on the requirements and needs of the patients suffering from chronic diseases. Palliative care has been increasing in recent times, with hospitals and clinics improving their palliative care capabilities. For instance, as of 2019, the Center to Advance Palliative Care estimated that around 72% of the American hospitals have a palliative care team. The Americas accounted for a market share of 37.0% in 2020. This high proportion of the market share of the Americas can be attributed to large number of patients suffering from critical illness and burden of chronic diseases. According to WebMD, in December 2020, the US ranked fourth globally in the prevalence of cardiac diseases. This increases the demand for palliative care as patients with cardiovascular diseases require palliative care the most.

Europe is expected to exhibit a CAGR of 9.10% during the forecast period. According to Eurostat, 20.6% of the population in the European Union were aged 65 and above in 2020. Geriatric population are more prone to suffering from chronic diseases, which increases the demand for palliative care in the region.

Asia-Pacific, with countries such as China, India, Japan, the Republic of Korea, and Australia, is expected to grow at the highest CAGR in the market and would continue with this trend through the forecast period. The major factor attributing to this growth includes emerging economic conditions, increasing investment in healthcare services, and increasing disposable income of the population. The growth could also be credited to factors such as large number of road accidents and trauma cases in the region.

The Middle East & Africa region is estimated to show staggering growth due to the presence of low- and middle-income countries and inadequate healthcare systems. According to the WHO, around 40 million people require palliative care every year, but 78% of them are not able to access it, of which around half of them are from Africa. However, government initiatives to implement better healthcare infrastructure are providing some amount of growth to the regional market.

The global palliative care market is distinguished by the presence of numerous global, regional, and local players catering to demand generated by bedridden patients suffering from terminal illness. The increasing demand for palliative care services is making the palliative care market more lucrative. The major players have adopted a strategy of inorganic growth such as mergers and acqusiitions. For instance, between October to November 2020, LHC Group, Inc. (US) announced the acquisition of palliative service providers in the US which includes Grace Hospice of Oklahoma, US., East Valley Hospice & East Valley Palliative Care, US, and Christus San Marco Hospice, US. In April 2021, Sunrise Senior Living (US) announced the opening of a new community in Newton, Massachusetts. Newton community consists of 85 assisted living and memory care units.

Scope of the Report & Segmentation

What is the growth rate of the global palliative care market?

The global palliative care market is growing at a CAGR of ~7.90% over the next 10 years.

Which region has the largest share in the global palliative care market?

Who are the key players in the global palliative care market?