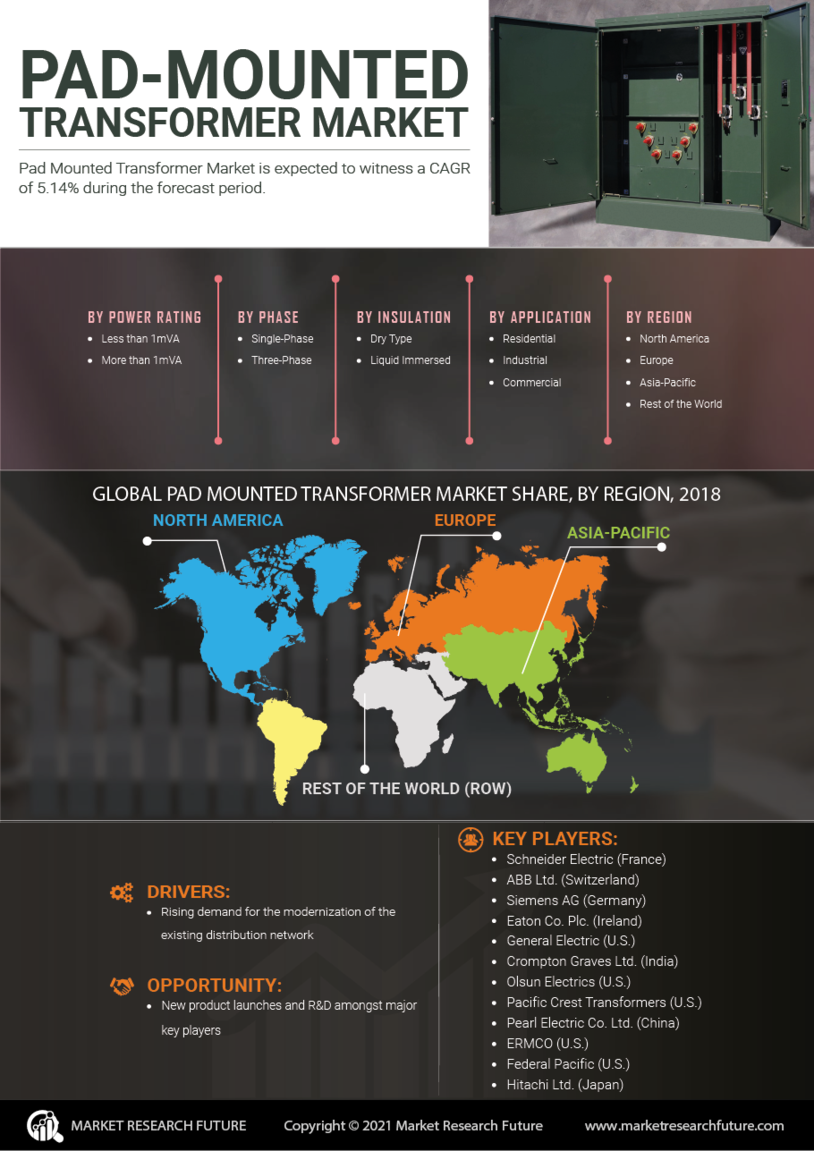 Pad Mounted Transformer market is expected to witness a CAGR of 5.14% during the forecast period.

North America accounted for the second largest share in the pad mounted transformer market. Huge investments in transmission and distribution networks are forming a wide scope for the electrical components in this region. The U.S. is a major region in the global market. It is one of the primary countries in the overall transformer shipments around the world. As the U.S. economy is witnessing huge growth due to impressive industrialization and urbanization across the country, it is estimated that the U.S will hold the one of the largest shares in the global transformer market.

For this study, the global pad mounted transformer market has been divided into four segments, such as power rating, phase type, insulation, and application. On the basis of power rating, the market has been segmented into less than 1mVA  and more than 1mVA. The less than 1 MVA dominated the power rating segment of the market in 2016 and is expected to remain same during the forecast period due to the growth in demand from the residential and commercial sectors. Commercial sector and houses normally do not have high power consuming equipment, unlike industries. Therefore, the demand for less than 1 MVA power rating pad mounted transformers is estimated to be higher as compared to more than 1 MVA rated power pad mounted transformers. More than 1 MVA segment is expected to contribute significantly during the forecast period mainly due to the increasing demand from the industrial sector.

A pad mounted transformer is a ground mounted electric power distribution transformer, locked in a steel cabinet mounted on a concrete pad. These transformers normally have features such as tamper-resistant construction, tamper proof bolts and screws, and lockable compartments with hinged doors.

The report for Global Pad Mounted Transformer Market of Market Research Future comprises extensive primary research along with the detailed analysis of qualitative as well as quantitative aspects by various industry experts, key opinion leaders to gain the deeper insight of the market and industry performance. The report gives the clear picture of current market scenario which includes historical and projected market size in terms of value and volume, technological advancement, macro economical and governing factors in the market. The report provides details information and strategies of the top key players in the industry. The report also gives a broad study of the different market segments and regions.

What growth rate can the market expect to achieve during the conjectured period?

The market is on track to achieving a growth rate of 5.14% in the following years.

The market size is forecasted to expand quite considerably by 2023.

Depending on phase, what are the market segments mentioned in the report?

What factors have led to APAC’s lead in the market?

Soaring demand for modernization of the existing distribution network to cater to the mounting need for electricity, expanding population and improvement in lifestyle have led to APAC’s lead in the market.