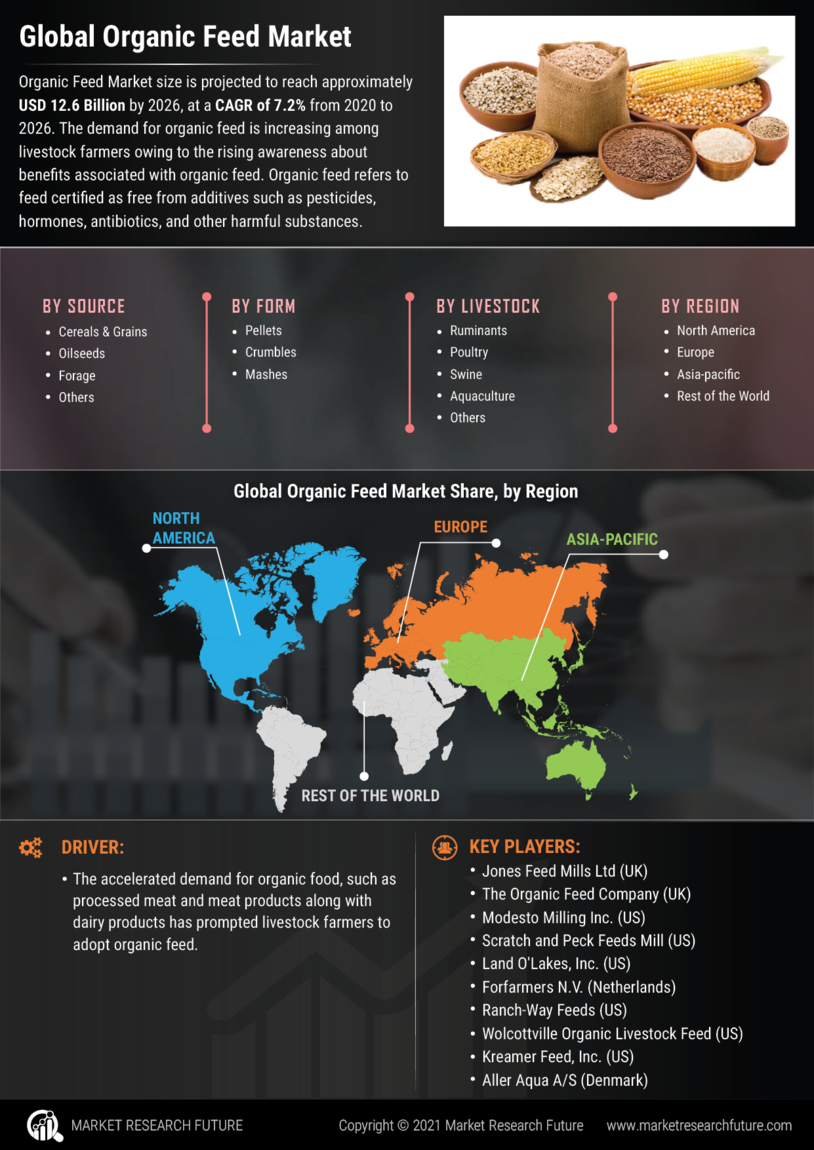 The Organic Feed Market Forecast says that the size of the market is projected to the USD value of 12. 6 billion by 2030. This is calculated with the CAGR of 7.2% from the year 2022 to 2030.The reason for the demand for organic feed to the cattle in the recent days is because of the increase in the knowledge in the disadvantage of using the chemicals feed supplements to the cattle. The organic feed is sold by the companies which supply the feed along with the certificate that the feed is free from the pesticide, hormones, antibiotics which can harm the cattle's organs.

Ingredients used in the preparation of the organic feed

Which are organically cultivated in many countries along with government support.

With the spread of the pandemic, many governments have started to restrict the people to their countries and then they have also started to implement the lockdown. Because of this lockdown implementation, the raw materials were not available for production. Later the shortage of labours has decreased the market value of organic feed. Even the lockdown has created the lack of vitamins for the cattle and live stocks because of this there was malnutrition among the live stocks have happened. So the people are in great worry about their livestock

A rise in the demand for organic feed has created a great impact on the market share.  Even many people are preferring organic products in recent days. As the feed is chemical-free and hormone-free which may not affect the growth of the organic trade. Food manufacturers are also focusing on the launch of organic products like milk, ghee, cheese and butter. As they are from the cattle which takes the organic feed.

The Organic Feed Market Outlook in the Asia Pacific region has increased because of the consumers. Even the government is increasing the awareness among the people because of the harmful things which are been induced in the feed. So a maximum of the people are preferring organic feed to chemical-induced feeds.

The main restraint which hinders Organic Feed Market Growth is the high price of organic feeds. As which is manufactured with many raw materials, which are imported from many countries. As this is planted organically so the charges will be high when compared to the normal plantation. So the plantation cost was high and then the feed cost is also high.

The challenge which is faced by the organic feed market is one of the hindrances which is created by the people. As the less in the awareness among the people about the has created the lack of the Organic Feed Market Analysis. Because of the lack of awareness, people are buying chemical foods for livestock. Which is been available at the lowest costs. Then the rise of pandemic issues which is created recently in 2022. Has blocked the market and the many regions government has implemented the lockdown because of the increase in the spread of the pandemic. so the raw materials which are imported from many countries are stopped because of the lack of transportation and the lack of workers.

The overall growth of the Organic Feed Market has created an increase in the sale of organic products. But many people are not interested in buying the feed because of the high cost-efficiency. When compared to the organic feed the chemical feed's market is high. So the growth is gradual but it does not make an impact among the people in buying the organic feed. Many governments are supporting organic feed products as it is healthy for the cattle. Even for the plantation and the importing the raw materials, many governments are supporting the manufacturers and the agricultural landowners.

The Organic Feed Market Value has increased in recent days. Due to the continuous promotion and awareness created by the government and the manufacturing companies, there are changes in the market value. so that the people wish to buy the organic feed which brings the healthy nature to your cattle is one of best change in the market. but when compared to the chemical feed which is induced with a lot of hormones, chemicals and pesticides with the required ratio which will create trouble for the cattle. But the organic feed comes with the certificate that this is created organically without adding any chemicals.

Europe is one of the dominating markets in the global organic feed market. this is because of the awareness of the people in the region the market value has increased when compared to the other sectors.

What valuation can the market reach by 2030?

At what rate can the market thrive in the coming period?

The market can thrive at a rate of 7.2% in the coming period.

What factors are boosting the market growth across the world?

The accelerated demand for organic food, such as processed meat and meat products along with dairy products has prompted livestock farmers to adopt organic feed. Numerous government schemes and programs across countries promoting organic farming can also benefit the market.

What organic feed form can achieve the highest growth in the market?

Pellets are the organic feed form can achieve the highest growth in the market.

Which region can be the global leader during the evaluation period?

Europe can be the global leader in the organic feed market during the evaluation period.