Aquaculture Market Research Report Information By Environment (Freshwater, Marine Water, and Brackish Water), By Type (Fishes, Crustaceans, Mollusca, and Others), and By Region (North America, Europe, Asia-Pacific, and Rest Of The World) - Forecast Till 2030 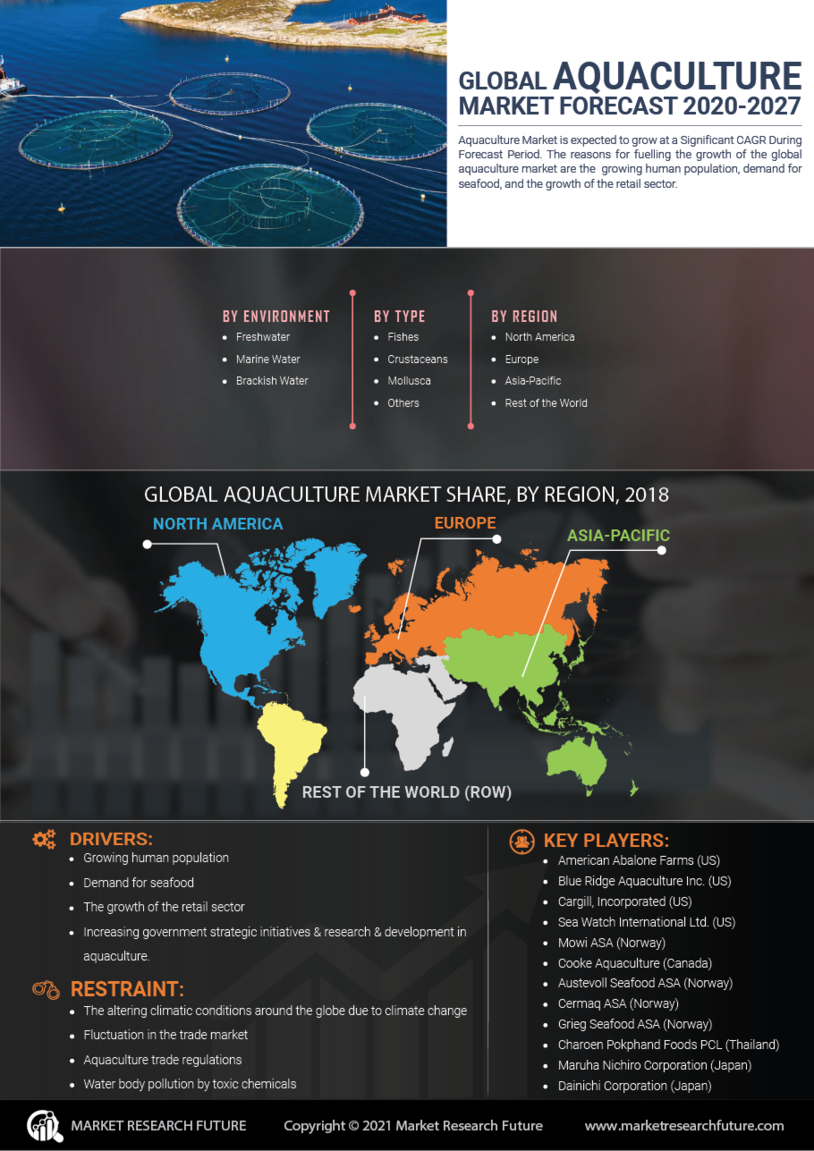 Aquaculture Market Size was valued at USD 152.2 billion in 2021. The aquaculture market industry is projected to grow from USD 160.9 billion in 2022 to USD 237.3 billion by 2030, exhibiting a compound annual growth rate (CAGR) of 5.71% during the forecast period (2022 - 2030). Increased demand for fish oil is increasingly in demand across various sectors, including food and beverage, medicines, nutraceuticals and expanding commercial operations in seafood are the key market drivers enhancing the market growth. 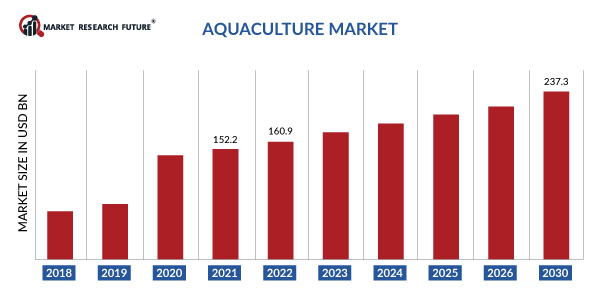 
Seafood is any aquatic species that can be eaten from the ocean and freshwater, including lobsters, crabs, mussels, and occasionally other sea life. The increased demand for seafood contributes to aquaculture's growing importance in the fish supply. For instance, the Organization for Economic Cooperation and Development (OECD), an intergovernmental economic organization with headquarters in France, estimates that 90% of the fish produced will be consumed by humans, which is expected to rise by 16.3% by 2029. The market CAGR will expand due to the growing demand for seafood.

Furthermore, several diverse cultural traditions heavily emphasize the consumption of fish. Given the quantity of protein, vitamins, fatty acids, vital micronutrients, and minerals in fish, it has a great nutritional profile regarding its positive impacts on health. Fish is an excellent source of omega-3 fatty acids, which have many health benefits, including reducing the risk of heart attacks, preventing depression, preventing childhood asthma, and enhancing brain health. Fish is also a good source of other essential nutrients and vitamins. The demand for seafood products is predicted to increase due to these factors, which will accelerate market expansion over the anticipated period. For instance, in December 2018, Fast&Up, an Aeronutrix Sports Products Private Limited division, introduced Promega, a new omega-3-rich fish oil. The product claims it will help the immune system and brain development. 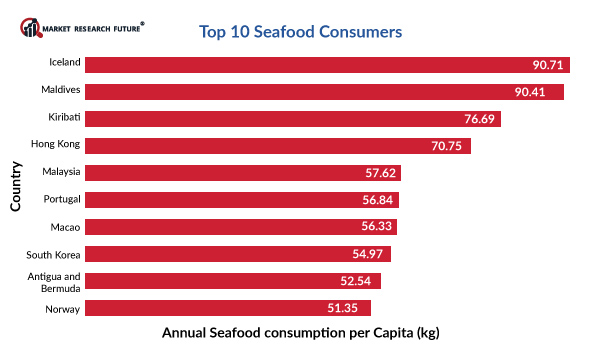 Furthermore, government initiatives and supportive policies are crucial in creating an environment conducive to aquaculture-related businesses. It covers research, legislative framework, and infrastructure. The United Nations Food and Agriculture Organization (UN FAO) has identified a future supply and demand mismatch for seafood. The demand for seafood is expected to exceed 260 million tonnes by 2030, while the supply is anticipated to be 210 million tonnes at the current production rate. As a result, it is considered a reliable source to satisfy the rising demand for seafood.

However, technological innovations are a crucia trend that is becoming increasingly popular in the aquaculture sector. For instance, in October 2019, the Commonwealth Scientific and Industrial Research Organisation (CSIRO), an Australian government agency for scientific research, developed a tool using augmented reality (AR) that uses novel pond and animal sensor technologies, data modeling, the next generation of data interaction techniques, situational awareness, and decision support for immediate understanding of key water quality parameters like pH, dissolved oxygen, and more. Thus, it acts as another trend driving the growth of the aquaculture market revenue.

The  aquaculture market segmentation, based on type, includes fishes, crustaceans, mollusca and others. The fishes segment dominated the market in 2021 and is projected to be the faster-growing segment during the forecast period, 2022-2030. Fish demand is driven by growing knowledge of the health advantages of seafood. For instance, fish has several health advantages and is a good source of minerals, vitamins, and proteins. Hence,  increased fish consumption due to its nutritional value positively impacts market growth. 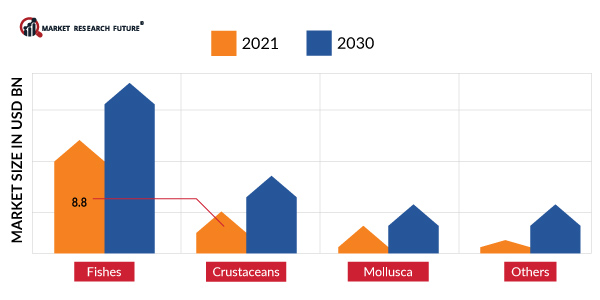 Besides, the mollusca category is anticipated to grow significantly over the forecast period as per the aquaculture market data, due to high demand, especially from applications related to food and nutrition. Fish species based on mollusks make up the majority of the aquatic life in the ocean. Molluscs are recognized as an important source of food.

By region, the study provides the market insights into North America, Europe, Asia-Pacific, and the Rest of the World. The Asia Pacific aquaculture market accounted for USD 69.7 billion in 2021 and is expected to exhibit a 45.80% CAGR during the study period. Population growth, economic growth, and sociological variables like customary fish consumption patterns contribute to the Asian-Pacific region's demand for firms. 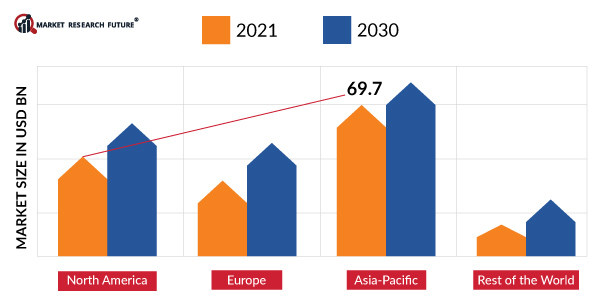 North American aquaculture market accounts for the second-largest market share due to the government's strong support for its development. Additionally, the species that have made a significant contribution to the growth of the sector, such as salmonids and mollusks, particularly hard clams, oysters, and mussels, are expected to fuel the expansion of the market in the area in the years to come. Further, the U.S. aquaculture market held the largest market share, and the Canada aquaculture market was the fastest-growing market in the North American region

The European aquaculture market is expected to grow at a substantial CAGR from 2022 to 2030. The primary driver of European market growth is the increased demand for fish as a nutritious food. Better sources of protein include fish and various types of seafood. Moreover, UK aquaculture market held the largest market share, and the France aquaculture market was the fastest-growing market in the European region.

Due to the favorable climate and abundance of natural resources in the area, the aquaculture industry in UK is predicted to grow quickly. There is a rising need for cutting-edge goods that can help create higher-quality products and increase the effectiveness of operations now that there is more area accessible for the practice. For instance, in July 2020, the leading protein market provider in the food sector, Urner Barry, announced an expansion of its coverage of shrimp trading in the European market.

Major market players are spending a lot on R&D to increase their product lines, which will help the aquaculture industry grow even more. Market participants are also taking various strategic initiatives to grow their worldwide footprint, including new product launches, contractual agreements, mergers and acquisitions, increased investments, market developments and collaboration with other organizations. Competitors in the industry must offer cost-effective items to expand and survive in an increasingly competitive and rising market industry.

One of the primary business strategies manufacturers adopt in the aquaculture industry to benefit clients and expand the sector is manufacturing locally to reduce operating costs. In recent years, aquaculture industry has provided medicine with some of the most significant benefits. The aquaculture market major player such as Nippon Suisan Kaisha Ltd. (Japan), American Abalone Farms (US), Cermaq ASA (Norway), Dainichi Corporation (Japan) and Cargill Incorporated (US).

Cermaq ASA (Norway) is a leader in salmon production, driving the food system's transition to healthier, more environmentally friendly food. In August 2021, a deal on integrated salmon and kelp farming was reached between the salmon producer Cermaq and the aquaculture business Folla Alger in association with top scientific institutions in Norway.

March 2022: WorldFish announced a comprehensive legal agreement with Premium Aquaculture Limited for the transfer of Genetically Improved Farmed Tilapia (GIFT) to Nigeria. Due to this agreement, Nigeria will be able to establish a company based on GIFT. By 2023, WorldFish/PAL GIFT tilapia should be available in Nigerian fish markets because to a partnership between WorldFish and PAL, the Bill and Melinda Gates Foundation (BMGF), and USAID.

How much is the aquaculture market?

What is the growth rate of the aquaculture market?

The market is expected to register a CAGR of ~5.71% over the next ten years.

Which region held the largest market share in the aquaculture market?

Asia Pacific held the largest market share in the market.

Who are the key players in the aquaculture market?

Which environment led the aquaculture market?

The freshwater category led the environment segment in the aquaculture market.

Which type had the largest market share in the aquaculture market?

Fishes category had the largest market share in the market.