OCTG (Oil Country Tubular Goods) are the components that are used in the production of oil and gas from the well. The proper use of OTCG could help reduce the probabilities of any mishap, hazard, and risks that ultimately save the production cost of the company. It includes, casing, drill pipe, tubing etc.

The oil and gas industry is capital intensive. So, it requires maintaining the balance in production of crude oil and gas to avoid any loss of money, machinery and resources This  drives the global OCTG market. The global OCTG market is very lucrative. Reservoir contracts are improving to sustain in the market while, technological developments, innovative tools could help the market, evolve. It is driven by increment in oil and gas production activities, exponential growth in shale gas reserves, and rising investment in upstream sector by operators. The OCTG market is expected to grow further because of the surge in offshore activities. Additionally, the oil industry is trying to increase their rig count in region like North America and Asia Pacific and which ultimately help accelerate the production in wells. The OCTG market is estimated to be valued at  USD 24.07 Billion by 2026; with a CAGR of 5.95%.

The global OCTG market is further segmented on the basis of type, make, grade  and regions. 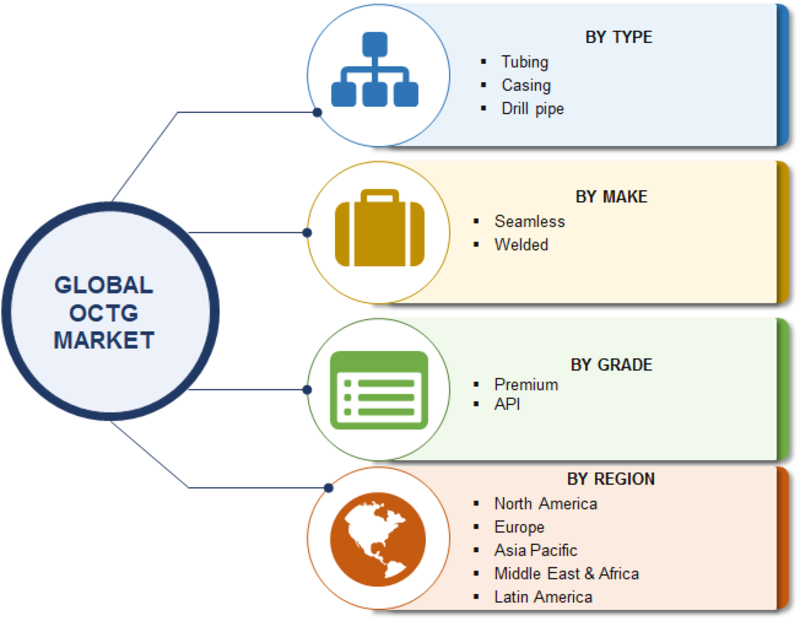 In 2018, North America had been leading among all regions while Asia Pacific region will lead during the forecast period. Some of the possible reasons behind this growth is the proper application of technology, lateral drilling activities, less time consumption in well-pipe installation, and the technicality of operator to drill a well as fast and efficient as possible.  Within the unconventional reserves such as coal bed methane, OCTG is expected to be extensively used.

In make segment, seamless pipe would dominate the market due to its mechanical properties, such as tensile strength and pressure handling ability in offshore drilling, which ensure operational efficiency.

What is the valuation recorded for the global OCTG market in the forecast period?

The estimated valuation of the market is USD 24.07 Billion in the forecast period.

Which region is prospering the market in the latest?

North America is the highest-earning region for the market’s growth.

What are the essential factors driving the OCTG market?

Technological developments, innovative tools, and production of crude oil and gas at a high level are the factors driving the OCTG market.

How Asia Pacific region is contributing to the market’s high revenue generation?

Acceleration of the production in wells as well as the rise in the oil industry to impact the Asia Pacific region to contribute to the market’s share.

What are the segments of the OCTG market?

Type, make, and grade are the segments of the OCTG market.