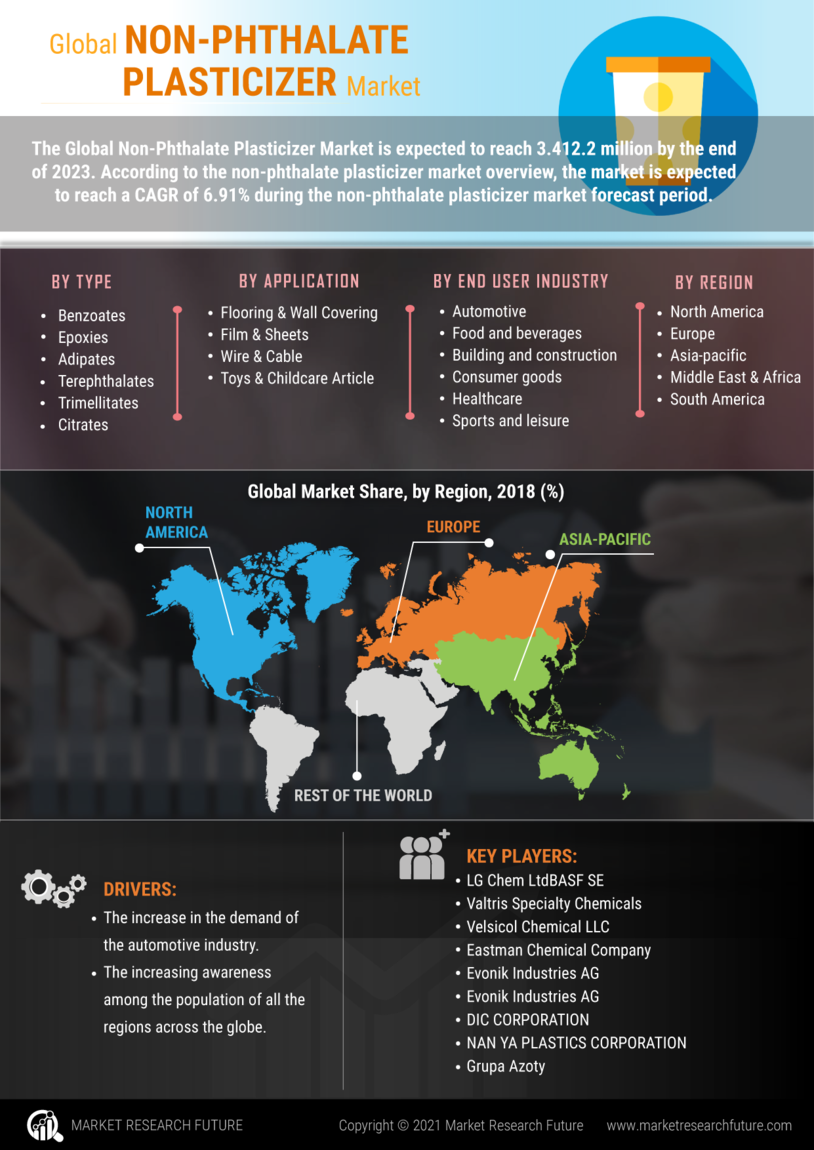 The Non-phthalate plasticizer market is expected to reach 3.412.2 million by the end of 2030.

Non-Phthalate Plasticizer Market overview:The Non-phthalate plasticizer market is expected to reach 3.412.2 million by the end of 2030. The rise in the non-phthalate plasticizer market is due to increased awareness for protecting the environment among all living beings. These are products that are derived from adipic or benzoic acids. They have some excellent characteristic properties like flexibility, plasticity, and durability, and they cause no or minimal ecological impact on the environment.

COVID-19 Analysis:A change in a negative direction impacts everything from big to small. Something alike has been experienced by everyone across the world since the onset of the Coronavirus pandemic. Not just the individuals but the companies have also been impacted to a great extent. Losing touch from the market to losing the clients they have seen all. Reports have been prepared for them to ensure that they get step-wise guidance and mentorship to get back whatever coronavirus has taken away. The words have all the requirements that a business would need for a comeback. Recovering from the mental and financial losses has been the primary focus of more business owners worldwide. Analysts have exclusively made the reports with decades of experience after the industry's current scenario in-depth analysis. The business is also given a chance to self-analyze its position at the moment in the global non-phthalate plasticizer market.

Market Dynamics:Various factors have been responsible for or have been impacting the non-phthalate plasticizer market trends. These are generally referred to as the growth drivers. The first and the major driving factor has been the increasing awareness among the population of all the regions across the globe towards bringing an ecological balance in the environment. With the ever-changing climatic considerations and other subsequent regulars that nature indicates humanity, it's high time to get involved in saving the background just for the present and for the future. Global non-phthalate plasticizers are one such sustainable alternative that causes minimal harm to the ecological system. Another major factor for growth in automobile manufacturing makes the vehicles litter and hence gains much more value. Moreover, with a lot of support from regulatory bodies and governments worldwide, the industry is expected to flourish and rise considerably.

Regulatory Implications:Regulations imposed by the government of various parts of the world on the use of non-sustainable alternatives of plasticizers have resulted in the flourishing of the non-phthalate plasticizer market. With the support from the government in terms of finances and laws being passed, the global market is all set to place its feet on the clouds and is expecting never to look back. With so many advantages it comes along as opposed to the none sustainable alternatives, these are a blessing not just for the manufacturers and the people associated with the industry but also for the population and the regulatory bodies involved. To add to the value of the non-phthalate plasticizer market share, the regulations have been getting more stringent and stricter for the competitors that are the non-sustainable options.

Segmentation overviewThe market can be divided into three subcategories. These are:


The adipates segment is expected to reach a market value of USD 1059.9 million by the end of 2023. The trimellitates segment is also expecting relatively healthy growth during the non-phthalate plasticizer market forecast period.


Based on end-users: Based on the end-users, the global non-phthalate plasticizer market has the following subtypes:

The segment that dominates the market is the construction segment because of the massive demand for flooring, carpets, and vinyl tiles.

Regional Analysis:Based on the region, the market can be subdivided into the following areas:


The region that dominates the non-phthalate plasticizer market supply is the Asia Pacific. The primary reasons for the dominance include the increasing demand in the end-user industries like construction, food and beverages, and automotive. Moreover, the emergence of strict laws against non-sustainable options has also contributed to the market's growth in the regions like India and China.

The second portion of the region is North America because of the increased demand in the construction and electronics industry.

Europe has also experienced noticeable growth in the market because of stringent laws against traditional phthalate plasticizers.

The Middle East and Africa experience moderate growth in the market.

The designs are not just for the benefit of the individual companies but also their entire market. They have also been an idol to the new entrants in the market. Various acquisitions, collaborations, and mergers amongst themselves have proved to be very beneficial in the non-phthalate plasticizer market trends. Also, they have been working hand in hand to bring about the latest technological advancements in the market.

Recent Developments:Here is the list of recent developments in the market:November 2021: Perstorp, a market leader in polyols, introduced Pevalen Pro, a new renewable-based polyol ester (non-phthalate) plasticizer. It is expected to increase the appeal of flexible PVC as a plastic material, owing to its much smaller carbon footprint compared to competing materials and technologies. Pevalen Pro's 40% renewable component benefits the environment by providing a renewable true non-phthalate plasticizer. It also provides better performance attributes.


In April 2017, LANXESS acquired a US-based company named Chmura. This acquisition helped LANXESS expand its business in North America.Grupa Axory ceased its production of Ortho phthalate plasticizers in the year 2018. Since then, the company has been focusing on the production of mom ortho phthalate and specialty plasticizers.New and continuous innovations are being done in the art to bring out the products tagged are not just eco-friendly but cost-effective.American chemical company Eastman Chemical is reportedly planning to introduce an innovative circular recycling technology. The technology will be used for processing polyester waste which are extremely difficult to recycle using existing technologies. In companies to make the technology fully operational within next one to two years.Sweden based chemical company Perstorp AB is reportedly unveiling an advanced renewable-based polyol ester (non-phthalate) plasticizer Pevalen Pro. This is likely to boost the marketability of flexible PVC on account of reduced carbon footprint. This is aligned with company’s ambition to boost renewable content to 100%.

Report overview:The exclusive reports have been prepared for the companies by the industry experts after the in-depth analysis of the market. The reports have all the aspects of good mentorship and guidance without any loopholes. Starting from the non-phthalate plasticizer market overview to the COVID analysis to help the business make a comeback after the dreadful corona period. Though the period is not over yet, the reports give step-wise guidance about the changes that need to be bought and steps to combat the losses. The market dynamics, segmentation overview, and regional analysis have also been provided to the business owners.

The list of the key players in the market helps the business self-introspect and work on the area they lack. Moreover, the entire list of the recent advancement in the market is also included in the report to make them aware of the current technologies added and utilize them for their excellence. The qualitative and quantitative measurement of the market size is also done in ten reports provided. This report will help people in evaluating the future prospects of this market and evaluate the long-term growth.

In December 2019, Brenntag released a new list of their product offerings which included a plasticizer like Oxoviflex (DOTP/DEHT). Oxoviflex is a Non-phthalate Plasticizer that displays a high purity level. This is also label-free and has been allowed in Europe to be used in situations that allow indirect food contact.

How much is the global non-phthalate plasticizer market worth in the future?

What are the major types and applications of non-phthalate plasticizer?

Adipates, Benzoates, and Trimillitates are the major types of non-phthalate plasticizer, which is used in applications such as film & sheets, flooring & wall covering, wire & cable, and toys & childcare articles.

Which region holds the largest share in the global Non-phthalate plasticizer market?

What are the key growth strategies of Non-phthalate plasticizer industry players?

Strategic initiatives such as mergers & acquisitions, collaborations, expansion, and technology/ product launch are some of the growth strategies that players operating in the global Non-phthalate plasticizer market adopt to gain a larger competitive advantage.

Who are the top players in the global Non-phthalate plasticizer market?

Non-phthalate Plasticizer Market Size to Scale at a CAGR of 6.91% During the Forecast Period 2018...