Conductive polymers are a class of polymers that conduct electricity. These polymers are lightweight, inexpensive plastics, which when stimulated by electricity shrink, bend, or protrude. These polymers offer metallic conductivity and can be used as semiconductors. These polymers are extensively used for anti-static packaging, textiles, capacitors, batteries, sensors, solar cells, actuators, and organic transistors. The growing demand in the aforementioned applications is a major factor driving the growth of the global conductive polymers market. Moreover, increasing consumer awareness regarding the shielding of electronic devices from electrostatic discharge and radio frequency interference is expected to positively impact market growth.  Moreover, the growing purchasing power in emerging economies has augmented the demand for electronics which is also contributing to the revenue of the global market. Furthermore, the growing smartphone market across the globe coupled with various government initiatives to digitalize the economy is driving market growth. In addition, the extensive use of lightweight materials in the automobile industry to increase fuel efficiency has propelled the use of PPP-based resins and ABS in wiring systems.

On the basis of product type, the ABS segment was the largest, accounting for over 32% in 2019. The growth of the segment can be attributed to the superior properties of ABS, including enhanced impact strength, durability, and temperature resistance. Moreover, ABS is used in numerous electronic applications such as IC tray and tray dividers, IC chip carriers, and tote boxes. Furthermore, the PPP-based resins segment is expected to grow at a significant CAGR due to its extensive use in the manufacturing of under-the-hood vehicle components as it offers enhanced thermal and chemical resistance. 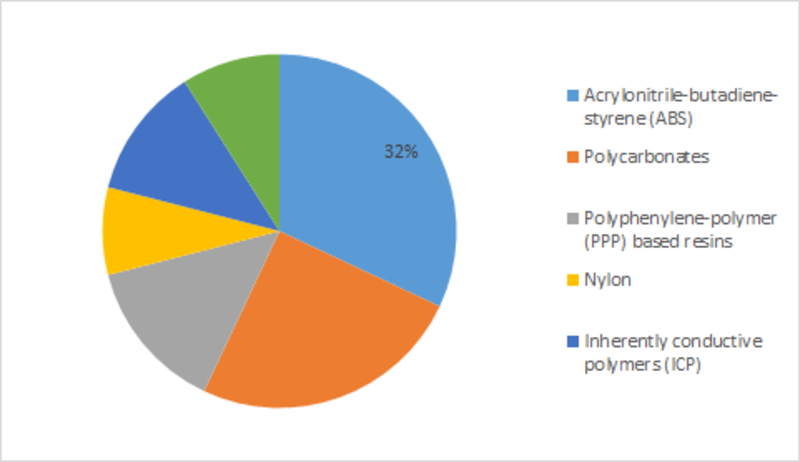 The report offers a brief analysis of the major regions in the conductive polymers market, namely, Asia-Pacific, Europe, North America, Latin America, and the Middle East and Africa.

What is the major driver of the global conductive polymers market?

What are the trends driving the global conductive polymers market?

The growing smartphone industry and the use of lightweight materials in the automotive sector are trends driving the global conductive polymers market.

In the ‘product type’ segment, which sub-segment can dominate the global conductive polymers market?

Under the ‘product type’ segment, acrylonitrile butadiene styrene can dominate the global conductive polymers market till 2023.

Which region can be the largest in the global conductive polymers market?

The APAC region can be the largest in the global conductive polymers market till 2023.

Who are the key players of the global conductive polymers market?

Global Conductive Polymers Market Is Growing With The Instantaneous Pace; Mainly Due To The Burge...