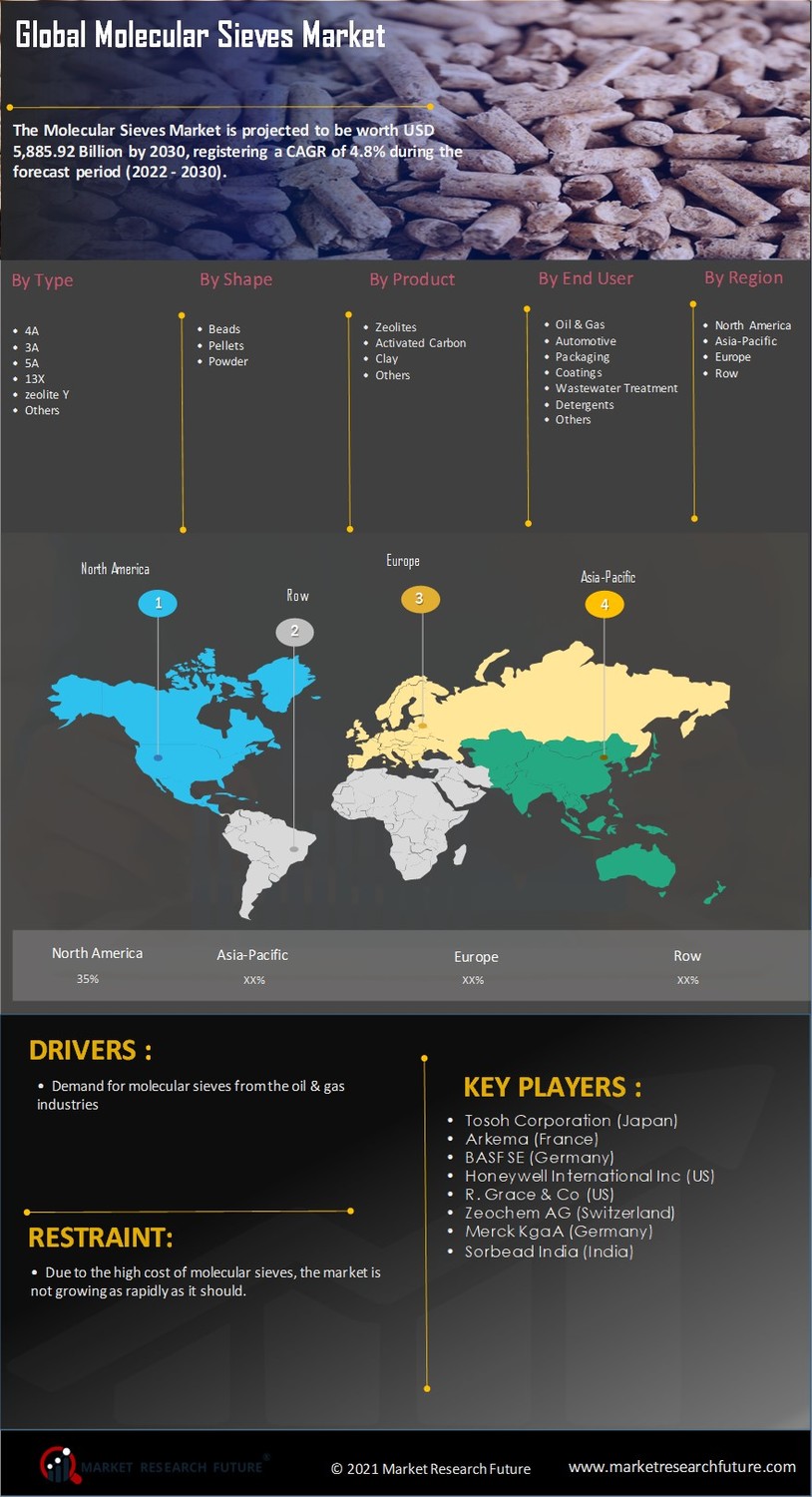 The molecules in molecular sieves are all of uniform size and structure, and they come from synthetic zeolite materials. Using them, liquids and gases smaller than the effective diameter of the pores can be absorbed. A fast-drying agent, it can trap moisture faster than silica gel and has fast drying properties. The aluminosilicate group of minerals includes zeolites. Zeolites belong to the chemical category of crystalline solids aluminosilicates. A molecule's chemical formula determines the size of the pores in molecular sieves and, in turn, determines the type of sieve that is used.

Global chemical and materials supply chains, manufacturing operations, and international trade have all been disrupted by the Covid-19 pandemic. Production has been disrupted due to tightened security globally as well as disruptions in production. Additionally, high-speed molecular sieves are used to produce oxygen by passing aluminum, silicon, and other molecules through them. Therefore, government rules have been eased allowing more access to molecular sieves. In addition to molecular sieves, a number of organizations in major affected countries have been given oxygen generators to convert nitrogen to oxygen. From its chemical catalyst and adsorbents segment, BASF SE provided molecular sieves to India in June 2021. The German government provided medical emergency equipment for India's healthcare. In addition to concentrators and cylinders of medical oxygen, BASF exports other products to support the health infrastructure in India.

A Honeywell International Corporation announcement in May 2021 said that it will contribute USD 3 million in relief to India under the Covid-19 process. Company personnel established critical care units with personal protective equipment, oxygen, and beds. The company also supplies its molecular sieve adsorbents (UOP OXYSIV) to the DRDO (Defence Research and Development Organization) and the Indian Institute of Petroleum.

The global market for Molecular Sieves Industry is dominated by,

The automotive and transportation industries rely on molecular sieves to solve various water problems. Moisture can cause short corrosion of automobile components, reducing their longevity. Desiccants are therefore integrated into the automobile system in the form of bags or cartridges as a means to protect them against moisture effects. Additionally, molecular sieves also prevent the corrosion of metallic parts in air brake systems of trains, buses, and medium and heavy-duty several trucks by keeping the air as dry as possible. As a result, rising demand from the automotive and transportation industries is a major factor for the development of this market. Globally, the automotive industry produced 424.1 million units in 2016 and is expected to reach 460.1 million units in 2021, according to the International Organization of Motor Vehicle Manufacturers (OICA).

Due to the high cost of molecular sieves, the market is not growing as rapidly as it should. Further, lack of availability and preference of alternative products such as silica gel, calcium sulfate, calcium oxide, montmorillonite, etc., among others are negatively affecting the market's growth, as these products have low costs and satisfactory performance. 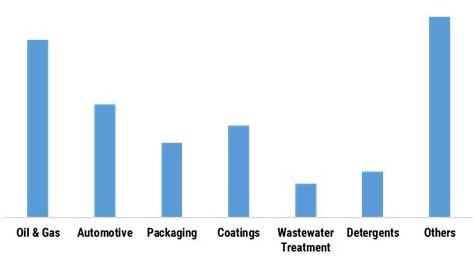 In this study, the global Molecular Sieve Market has been divided into multiple segments based on type, shape, product, end-use industry, and geography.

Molecular sieves are categorized into 4A, 3A, 5A, 13X, zeolite Y, and others in the global market for molecular sieves. The global market was dominated by the 4A segment. With a virgin state, it had a cost advantage that gave it 20 percent of the market share in 2020. Adsorbs water, ethanol, ammonia, carbon dioxide, and ethanol. It is an alkali metal aluminosilicate with a 2-angstrom effective hole opening. The 4A coating can also be used for removing moisture from liquids and gases.

By product shape, the global market is categorized into beads, pellets, and powders. A major portion of the market share was accounted for by the beads segment due to their broad use in many industrial applications. Within the forecast timeframe (2021-2028), the industry is predicted to register a CAGR of around 4% in terms of volume.

There are four main segments in the market: Zeolites, activated carbon, clay, and others. Due to its growing demand for industrial and medical oxygen, the zeolites segment dominated the global market.

Oil & gas, automotive, packaging, coatings, wastewater treatment, detergents, and others have been segmented based on end-use. A major market share of over 20% will be accounted for by the oil and gas end-use segment in 2020, followed by the automotive sector. A primary reason for its growth is the application for the purification and dehydration of aromatic hydrocarbons and aliphatic hydrocarbons, synthetic gas, mercaptans, and other impurities.

According to the forecast for the review period, the packaging is likely to grow at the highest rate. Molecular sieves are incorporated into packaging end uses such as film, batteries, pharmaceuticals, fuel propellants, electronic components, and machine parts to protect these products from damage. When packaging is used in enclosed spaces, molecular sieves are often used to remove contaminants and dehydrate.

More than 30% of the market's revenue was derived from Asia-Pacific in 2020, and it is expected to grow at a faster clip during this forecast period and remain the leading revenue source. Molecular sieves market growth in the region is being fueled by urbanization and rapid industrialization. South Asian countries and India, China, Indonesia, and Indonesia have contributed significantly to the expansion of the market.

The molecular sieves market growth is also expected to benefit from the growth of the oil and gas industry. Asia-Pacific region by 2022, approximately half of incremental consumption is expected to be accounted for by India and China.


According to the International Food Information Council, Europe was the second-largest market for food additives in 2020, owing largely to the growth of end-use industries like packaging, oil and gas, automotive, and coatings. Among the major countries driving market growth, Germany, the UK, France, Italy, and Spain are among the top five.Recent Development• October 2021- Pasadena-based climate tech company, CarbonCapture Inc. which makes machines, which remove carbon dioxide (CO2) right from the atmosphere, announced the closing of a USD 35 million Series A funding round. The company is going to use these funds to set up primary deployments of its renewable energy-powered Direct Air Capture (DAC) systems in U.S. locations, beginning with the Tamarack Nickel Project in the central Minnesota region in collaboration with Talon Metals Corp. and Rio Tinto PLC. • September 2021- Shell, a leading player in the energy industry, announced a collaboration with catalyst expert BASF’s Sorbead Adsorption Technology in its carbon decline program following a collaborative partnership. The incorporation included operating together to evaluate the use of the Sorbead technology for both pre-and post-combustion carbon capture and storage (CCS) activities. The Sorbead technology is perfect for dehydrating carbon dioxide following capture due to its high capacity for water and aluminosilicate gel composition, in this scenario by Shell’s carbon capture technologies: CANSOLV or ADIP Ultra.

At what CAGR is the global molecular sieves market projected to grow in the forecast period (2022-2030)?

molecular sieves market is projected to grow at approximately 4.8% CAGR during the assessment period (2022-2030).

In the global molecular sieve market, which end-use industry is the largest?

Molecular sieving is used primarily by the oil and gas industry, the largest end-use industry worldwide.

Molecular sieves market growth has been largely driven by what factors?

Increasing demand in the automotive industry for catalysts with improved performance and environmental regulations related to VOC emissions are major factors contributing to the global molecular sieves market's growth.

Where is the global molecular sieves market dominated by the largest region?

North America and Europe are the two largest markets for molecular sieves, followed by the Asia Pacific.

In the global molecular sieves market, which players are leading?

Growing demand from the oil &amp; gas industry the Globe is Expected to Boost the Demand for Mole...