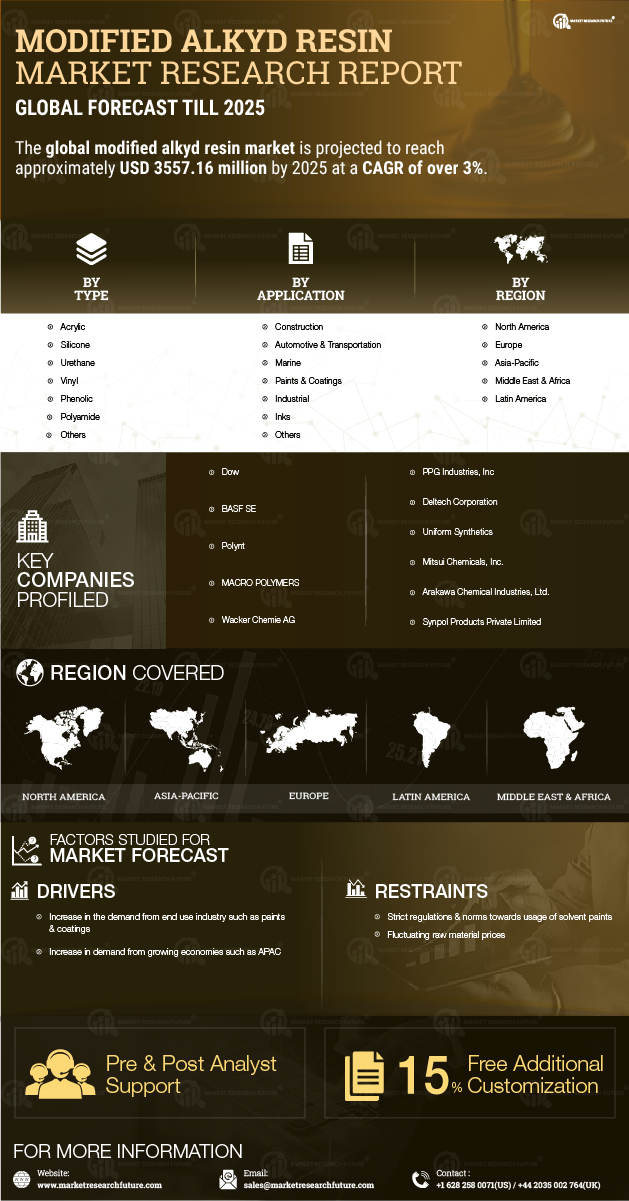 
Modified Alkyd Resin Market is projected to reach approximately 2030 at a CAGR of over 3%.

Alkyd resins are thermoplastic polyester resins made by heating polyhydric alcohols with polybasic acids or their anhydrides. These resins are mainly used in making protective coatings, which exhibit good weathering properties. These resins are also an important ingredient in a number of synthetic paints due to their versatility and low cost. Modifications in alkyd resins are done to produce specific performance properties and finished film characteristics, resulting in resin coating systems which are durable, flexible, hard, and exhibit rapid curing. The global modified alkyd resin market is the increasing demand for paints & coatings across the various end-use industries such as construction, automotive & transportation, inks, packaging, and others. The growth of these end-use industries across the globe is the key driver of the global modified alkyd resin market. Decreasing unemployment rate and high disposable income have resulted in economic growth, driving the growth of these end-use industries. Increasing production and sales of automobiles across the globe are driving the demand for paints & coatings, which in turn, drives the demand for modified alkyd resin. The global production of automobiles was valued at 95,634,593 units in 2018. The widespread use of modified alkyd resin in architectural undercoats is another factor propelling market growth.

Growth of the building & construction industry on the backdrop of rapid industrialization and urbanization across the globe is propelling the market growth. Emerging countries such as India, Thailand, Malaysia, Brazil, and GCC have a significant potential for the growth of the market. For instance, with the mega events such as Expo 2020 and FIFA World Cup 2022, the UAE and Qatar are expected to increase the number of construction and renovation activities, thereby fueling the demand for modified alkyd resin in the Middle East. Dubai has allocated USD 7 billion for infrastructure development and construction for the World Expo 2020 while Qatar is spending in the country’s economic transformation program, National Vision 2030. Under the National Vision 2030, the government plans to invest approximately USD 16.4 billion in infrastructure and real estate projects over the next four years. However, increasing preference towards the water-borne coatings due to their low VOC content is a major restraining factor to the growth of the market.

The global modified alkyd resin market, by region, has been segmented into North America, Europe, Asia-Pacific, Latin America, and the Middle East & Africa. Asia-Pacific accounted for the largest market share in 2018 due to the high demand for modified alkyd resin in major end-use industries, especially in automotive and construction. Lenient government regulations on the use of solvent-based coatings is a major factor propelling market growth. According to Invest India, the construction market in India is expected to become the third-largest worldwide and is projected to exhibit a CAGR of 5.6% during the forecast period. Rapid industrialization in emerging economies such as Brazil and Chile is expected to drive the product demand in Latin America during the forecast period. Presence of infrastructural hub in countries such as the UAE, Dubai, and Turkey are expected to fuel the market growth. The markets in Europe and North America is projected to register moderate growth on account of the stringent environmental regulations by the European Chemicals Agency and the US Environmental Protection Agency.

What would be modified alkyd resin market valuation by 2025?

What would be the modified alkyd resin market CAGR during the forecast period of 2022-2030?

What would be the biggest restraint for the modified alkyd resin market?

The modified alkyd resin market restraint could be shift towards water-borne coatings.

Which region would dominate the modified alkyd resin market?

The Asia Pacific region would enjoy the upper hand in the modified alkyd resin market.

What are type-based segments of the modified alkyd resin market report?