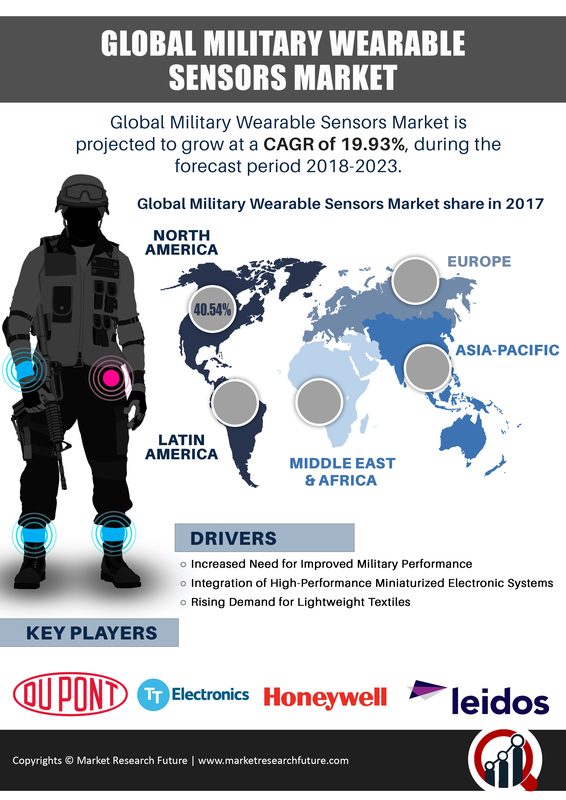 The market for military portable sensors will grow by $ 147.29 million over 2020-2025, advancing to a 6% growth rate over the forecast. The reports on the military market of portable sensors provide holistic analysis, market size, and forecast, trends, growth drivers, and challenges, as well as stock analysis on about 25 suppliers.

The market for a military wearable device is segmented as follows:

Portable sensor market According to application, the watch applications sector is expected to maintain a large market during the forecast:

Portable devices offer a wide range of functionality, from simple functions like heart rate monitoring and calorie burning to advanced smart functions like giving data on smell, taste, hearing, and vision. Wristwear accounted for about 50% of the portable sensor market in 2015. Body clothing is further divided into clothing and underwear, armbands and leggings, smart socks, body-worn cameras, and chest straps.

Based on the region, the global market for military portable sensors is divided into Europe, Asia-Pacific, North America, Latin America, and the Middle East, and Africa. North America dominates in the market share of military portable sensors in 2016 and is likely to remain the same for years to come. As there is a greater need to improve military modernization efforts and significant investments to monitor and develop the health of the military, it is anticipated that the development of military platform data security is anticipated to feed the demand for portable military sensors in the coming years.

North America is responsible for the largest market size at the time of the forecast.
The growth of the portable sensor market in North America will be driven by several factors. One of the most important factors is innovations and technological advances that result in the introduction of new products. The growing demand from consumers and medical applications has also driven the growth of the market in North America. Other factors that promote growth include the increased incidence of chronic diseases.

Military wearables market scope:
This study identifies the greater focus on the development of biosensors as one of the main reasons that lead to the growth of the portable sensors market in the coming years.

The report presents a detailed picture of the market through the method of study, synthesis, and summation of data from various sources through the analysis of key parameters.

The military market for portable sensors covers the following areas:

Military wearable market dynamics:
Driver: miniature trend in sensors:
Portable devices such as bracelets, body clothes, and glasses are increasingly used in healthcare and consumers. Over time, portable product technology has steadily improved and devices are getting smaller. According to the Irish Times (2015), the trend in the portable ecosystem is slowly shifting from "portable" to "wearable" and, in the next decade, portable devices will be "disappearing". This implies that key players in the portable ecosystem, such as Fitbit, Apple, and Garmin, are constantly striving to deliver cutting-edge innovations in portable products (such as portable devices with maximum functionality and tiny size).

The miniaturization of sensors using microelectronics was essential in the development of portable devices. One of the main obstacles in the adoption of sensing technology, especially for portable electronics, is the size of the sensors. The hardware components collect the physiological and motion data suitable for long-term control applications. The growing use of sensors based on MEMS, nanoelectromechanical systems (NEMS), and CMOS technologies is also another important market.

Support: Lack of common standards and interoperability issues:
In the current scenario, there are many smart devices connected to the Internet on the market and the number is growing rapidly. Standardization is the main requirement to allow effective communication of sensor information and sensor data. Some companies have created standards for sensory communication. For example, OGC's Sensor Web Enablement (SWE) standards meet the requirement for better communication between sensors in the most complex and very simple applications. SWE standards make it easy to integrate this information into thousands of geospatial applications that implement OGC or other standards. The lack of common standards for sensory communication also creates interoperability problems. Interoperability and the easy exchange of information between connected devices are crucial to the growth of a portable ecosystem. Currently, the technical and market scenarios for portable technology are not very satisfactory in terms of architectural solutions or universal standards to solve the issue of interoperability. To achieve this, efforts such as understanding the role of security and its importance will be required for companies, organizations, and developers for a considerable time. Therefore, the lack of common standards and interoperability problems limits the growth of the general portable sensor market.

Opportunity: increase in the number of connected devices:
In the last five years, significant changes have taken place in the global internet penetration. Almost a third of the world's population uses the internet now, with higher bandwidth. This has increased the number of smart devices internet-enabled in developing countries. In 2014, the global use of smartphones grew at a rate of about 25%. Smartphones are among the mobile devices widely used in the portable ecosystem and are used primarily to collect and track health and fitness data for groups aged 0 to 9 and 60 and over. Besides, portable technology makes up an important segment of platforms, such as IoT and M2M, and these platforms are the main factors for the increase in the number of connected devices globally.

Problem: Technical problems with hardware and software:
As with many new technologies integrated into a system, portable devices witness performance problems related to hardware and software that can hinder their widespread adoption. A common concern the user faces is waterproofing, as sweating or washing can create harmful moisture for portable electronic components. Also, the compact size of the devices can result in limited electrical reserves or small screens and screens. Some of the features related to the weapons crisis have already been published on the market; For example, in 2011, Jawbone's UP product encountered board problems that affected retrieval, data collection, and sometimes overall function. Thus, the factor linked to the technical difficulty of hardware and software in portable devices is a major challenge for the growth of the market of portable sensors.

The study was conducted using an objective combination of primary and secondary information, including contributions from key players in the industry. The report contains a comprehensive view of the market and the supplier, as well as an analysis of the major suppliers.

The report provides a detailed overview of the market in the study, as well as the analysis and evaluation of information from a variety of sources in the analysis of key components such as profit, pricing, competition, and promotion. It presents/displays several aspects of the market, identifying the main influencers in the industry. The data presented are comprehensive, reliable and the result of extensive research - primary and secondary.

This market research report provides a complete competitive landscape and in-depth method of selection and analysis of suppliers through qualitative and quantitative research to predict the accurate market growth.