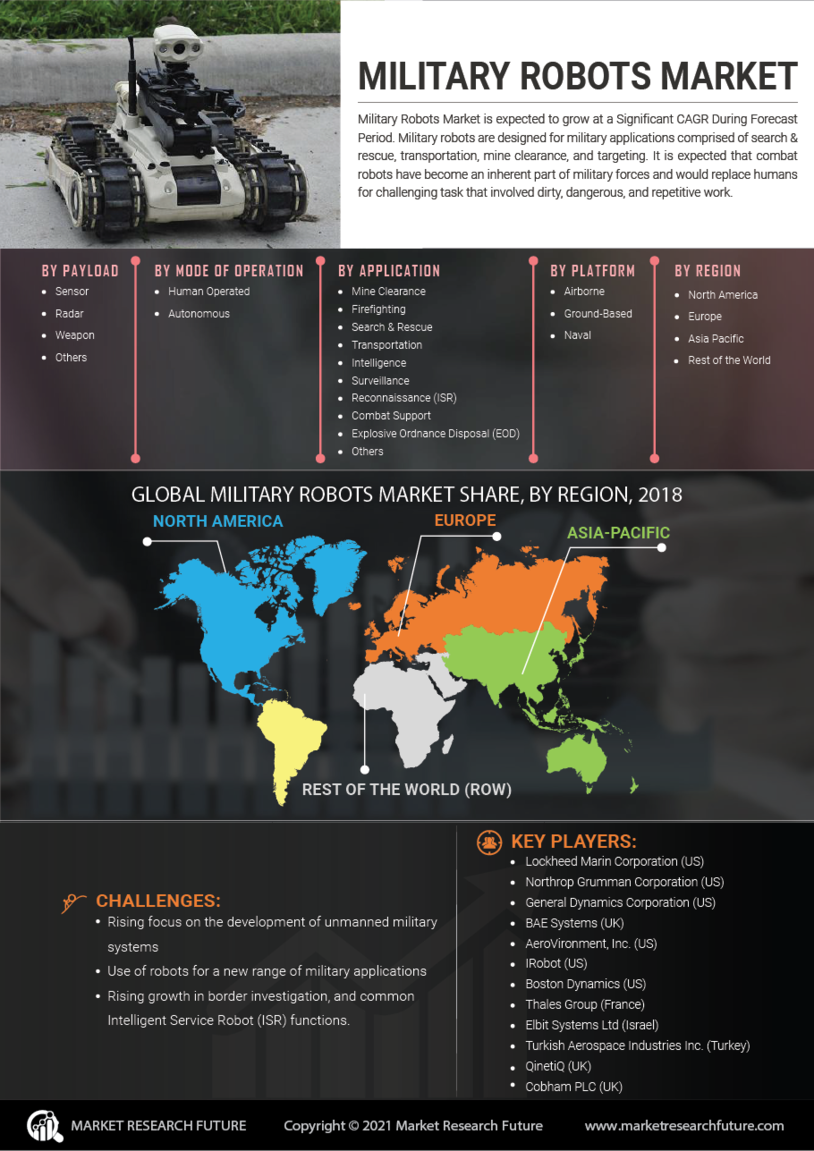 The global military robots market size was registered to be growing and attaining a market value of USD 14.5 billion during the historic forecast period that had ended in 2019. For the ongoing forecast period of 2021-2028, the military robots market share is likely to reach USD 24.2 billion by 2028, at a CAGR of 10.7% during the period. Growth drivers for this market include the increasing and elaborated use of robots in areas that have been affected by the chemical, biological, radiological, and nuclear (CBRN) attacks, followed by the increased use of robots for mine countermeasures, and the increase in the degree of use of UAVs in conducting the life-threatening missions. However, the global growth of the market during the forecast period is restrained by the emergence of high operational costs and the reliability of the use of robots. There are an array of opportunities for producers and manufacturers to develop fully autonomous robots that are reliable and capable of carrying out specific applications and employ in dangerous missions. However, the rise in challenges such as the need for continuous power supply and limited range need to be overcome before opting for international market growth.

The outbreak of the COVID-19 pandemic has caused a multi-level impact on economies worldwide. The global manufacturing and production of components and systems of military robots and their assembly lines are experiencing a moderate impact since the supply of military robots is considered to be of prime importance for applications like explosive ordnance disposal and mine clearing.

Resuming the production, manufacturing, and delivery of military robots is dependent on the level of COVID-19 positive cases and exposure a country is facing, the level at which manufacturing and production operations are running followed by the import-export regulations, and others. Although the global market companies may still be taking in orders, delivery schedules for the same might not be fixed.

Robots are proven to be the most helpful in uncertain and extreme environments. They can further, perform inspection and surveillance activities within a few minutes and are very effective in complex issues like nuclear, biological, and chemical warfare scenarios. For instance, the Fukushima Daiichi nuclear disaster that happened in 2011 resulted in the development of catastrophic consequences for Japan. This led to an elaborated use of robots for clearing debris caused by this disaster nuclear meltdown. Robots were further, used for controlling the spread of radiation, and also, shutting down the nuclear reactor.

UAVs are understood to be highly susceptible to electronic jamming and electronic warfare. Also, due to the limited range offering in most UAVs, they are not considered to be suitable for long-range operations. Since they are also prone to malfunctioning due to weather conditions, they are not very reliable for conducting critical operations.

Fully autonomous UGVs that are known to be equipped with artificial intelligence and are further understood to be capable of carrying out operations with minimum human intervention are being on the stage of development worldwide. The use of these military robots by defense forces worldwide is expected to enhance their combat capabilities.

The military robots market value has gained an excellent boost during the ongoing forecast period that will be ending in 2028 owing to the record-breaking performance that has been registered for the market segments and their rising ability to meet the needs of the target audience. The global military robots market has been segmented based on the following:

Based on the sensor

The sensor segment accounted for the largest market share during the historic forecast period that had ended in 2019. Sensors support various functional systems such as cameras, communication devices, and assist in providing connectivity. Therefore, the segment is likely to grow over the forecast period.

Based on the mode of operation

The military robots market has been segmented based on the mode of operation and includes human-operated and autonomous. The autonomous segment dominated the market in the historic period of 2019 and is expected to grow at a higher CAGR during the forecast period ending in 2028. There has been a rise in funding for research and development, a considerable rise in modernization programs, followed by the procurement of new military equipment is driving the global segment growth.

The market has been divided based on application and includes mine clearance; firefighting; search and rescue; transportation; Intelligence, Surveillance, and Reconnaissance (ISR); combat support; Explosive Ordnance Disposal (EOD); amongst others.

The global military robots market share has been on the verge of major expansion during the ongoing forecast period that will be ending in 2028. The global market operations are segmented based on the regions and are prominent in 5 regions namely - the North American region, the APAC countries, the European region, the Middle East, and Africa.

The European military robots market has been anticipated to grow at the highest CAGR from 2020 to the end of the forecast period in 2028 as projected by the business chiefs. The European region countries such as Russia, Germany, the UK, Italy, France, and the Rest of Europe like Sweden, Norway, Denmark, etc. are being considered in this regional market analysis. the efforts that are being pooled by them for the international growth of the region are commendable. One of the strongest growth factors for the explicit military robots industry in Europe is the increased use of UAVs for surveillance.

The prominent major key players that are giving rise to the propelling competition in the global military robots market are as follows:


These market players, as a part of the growing military robots market size during the ongoing forecast period of 2021-2028 are understood to be using various marketing strategies for attracting potential customers and hence, increasing their revenue and sales quantum that will help in enhancing the market chances to meet the set figures for the period by the business chiefs. Also, these market companies are on their way to utilizing the resources from society for ensuring proper growth in the global market during the period ending in 2028.

In June 2020, one of the prominent market players - FLIR Systems, Inc. took to the international market and announced that the US Army and Navy have placed an order of more than 160 of the company’s Centaur UGVs, as well as related spares and accessories. This will provide major expansion and sale opportunities to the market player and propel in the international market scenario.

In June 2020, another prominent player - Northrop Grumman Corporation entered and secured a contract with a market worth USD 333 million from the US Department of Defense. This contract deals with the rising needs for development, maintenance, and supply of three low-rate initial productions of the MQ-4C Triton unmanned aircraft in the global market premises.

In August 2019, another propelling player of the military robots company share - AeroVironment received a worthy amount that is fortunate for the international dealing of the company, especially in the ongoing forecast period. The USD 45 million contract from the US Army Security Force Assistance Brigades has been signed to complete the supply requirements of Raven B Unmanned Aircraft Systems. The delivery of these systems is known to have begun in January 2020.

The military robots research report considers some market aspects like the impact of the pandemic on the market operations followed by the overview that helps in understanding the basic market functioning. The global report contains information related to the driving factors that boost the growth of the military robots market during the ongoing forecast period. This report also contains the opportunities available during the forecast period ending in 2028 along with the factors that hinder the growth of the military robots market size. the report helps understand the basis of the global market segmentation followed by the factors giving rise to competition and prominent recent developments by the competitive players in the global market premises. the report further, helps in understanding the potential of the market segments to meet The rising needs of the audience followed by witnessing and surveying their potential to meet the set targets for production, sales, growth, and much more.

What are the key applications of Military Robots Market?

What are the top factors fostering the Military Robots Market growth?

The top factors fostering the market growth are rising growth in border investigation, and common Intelligent Service Robot (ISR) functions. Other key drivers expected to contribute towards the growth of the military robots market is the rising focus on the development of unmanned military systems and the use of robots for a new range of military applications.

What CAGR is the global Military Robots Market touted to secure in the coming period?

The global Military Robots Market is touted to secure a CAGR of close to 9.5% in the coming period.

Which region is bound to procure the fastest CAGR over the review period?

APAC is bound to procure the fastest CAGR over the review period.

What factors make APAC an attractive market for military robots?

The factors that make APAC an attractive market for military robots include the surging defense expenditure in China and India, rising territorial conflicts, and the growth in terrorist activities that prompt the countries to spend considerably on advanced military equipment.