The Military Airborne Radar Market is expected to grow from USD  4.1 billion during the historic forecast period that ended in 2019 to USD  6.0 billion by the end of the current forecast period in 2028. The global market is likely to grow and attain a global CAGR of 8.0% during the period ending in 2028. Some of the prominent market factors that are expected to fuel the growth of the airborne radars market are inclusive of the increasing focus on obtaining the required degree of precise intelligence during airborne surveillance to support the decision-making process.

There has been a rapid spread of COVID-19 in main countries like the European countries, the US, and the Asian Pacific region has led to a significant drop in overall defense-related budget allocations. This led to depleted interests in military modernization programs in the global Military Airborne Radar Market. This has resulted in stagnant demand for airborne radar alongside a corresponding reduction in revenues for various applications and airborne radar providers across all markets. This is because of the late delivery of goods followed by manufacturing shutdown, and limited availability of equipment. 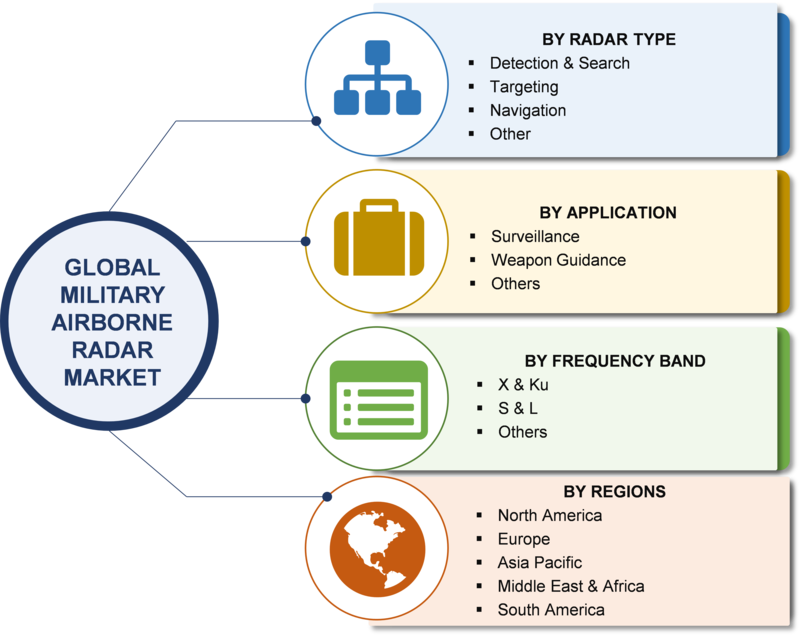 Phased array antennas are known to have an advantage over parabolic antennas wherein the radar system can opt to schedule the transmission followed by the reception beams according to specific operational modes. These are inclusive of low beams for long-range detection, followed by multi-pulse beams for detection in clutter, and high beams for ballistic missile warning.

There has been a growing demand for long-range radars. These can function effectively in rough weather conditions which is one of the major driving factors for phased array airborne radar market size during the forecast period. Multiple manufacturers, as a part of the market, are offering phased array airborne radar products for both commercials as well as military applications.

Military Airborne Radar Market trends are facing tremendous challenges that are inclusive of operating efficiency during the development of rough weather conditions. Heavy rain and other forms of precipitation are known to result in signal echoes that can help to prevent the target signals from reaching the radar receiver. Precipitation particles, as a part of the natural processes in the atmosphere also are known to cause the reflectivity phenomenon wherein the signals from the radar are aimed at a target body that reflects over these particles leading to false target signals.

The global Military Airborne Radar Market is witnessing the improved system reliability and understanding it to be a crucial factor in the selection of an airborne radar by any prominent country. The incorporation of advanced hardware units helps gather and distribute the imagery across a series of defense platforms such as combat vehicles and command headquarters. Both, commercial as well as military airborne surveillance systems have known to be evolved with time and hence, are still undergoing a major degree of advancements, such as the use of software-defined radio and synthetic aperture radars.

The military airborne radar market analysis shows that the market components include:

This segment includes the following:

The platform segment of the global market includes the following:

This segment of the market is inclusive of the following:

The waveform segment of the market is inclusive of the following:

The global military airborne radar market share is likely to undergo major expansion during the ongoing forecast period that ends in 2028. The global market operations are segmented based on the regions and are prominently functioning in 5 major regions namely - the North American region, the APAC countries, the European countries, the Middle East, and Africa.

The prominent key players that are giving rise to a huge degree of competition in the global military airborne radar market are as follows:


The global market players, as a part of the growing military airborne radar market size during the ongoing forecast period of 2021-2028 have understood the urgent need to be using various marketing strategies for attracting and expanding the potential customers base. Hence, there has been an increase in their revenue followed by the sales quantum that is likely to help in enhancing the chances of the global market to meet the set figures for the period that will be ending in 2028. Also, these prominent market players are on their way to utilizing and make the use use of the available resources from society’s end for ensuring proper growth in the global market during the ongoing forecast period that will end in 2028.

At what rate is the global market expected to grow in the coming years?

Global market is expected to grow at a rate of more than 5% in the coming years.

What makes APAC a lucrative market?

APAC is a lucrative market since the region is investing significantly on military equipment and is increasingly using automation in surveillance and security radar technology for improving its airborne military infrastructure.

Which application-based segment can note the highest growth rate?

Weapon guided system is the application-based segment that can note the fastest growth rate.

Who are the top market contenders?

Which countries in APAC are the strongest markets for military airborne radars?

Emerging countries like South Korea, China, India and Japan are the strongest markets for military airborne radars in APAC.