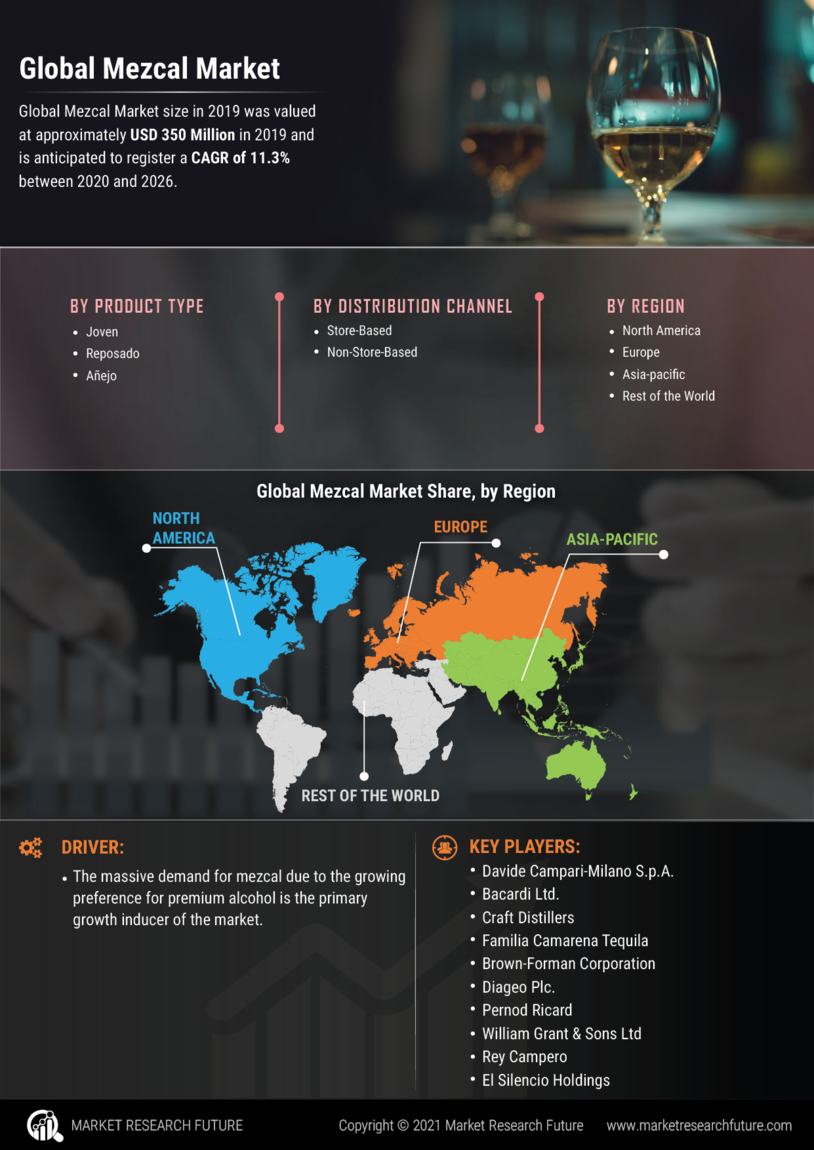 Mezcal Market size in 2019 was valued at approximately USD 350 Million in 2019 and is anticipated to register a CAGR of 11.3% between 2020 and 2026.  The demand for mezcal is witnessing robust growth in the last couple of years. Increasing preference for consumption of premium alcoholic drinks has been one of the major factors towards the growth of the mezcal market. Mezcal is a distilled alcoholic beverage made from the agave plant. It is a traditional Mexican alcohol beverage made from 30 different types of agave. Mezcal and Tequila, are both Mexican distilled spirits. However, unlike mezcal that can be made from 30 different types of agave, tequila can only be made from blue agave. Increasing preference among the younger population for the consumption of authentic flavors and “small-batch spirits” have been a key factor towards a surge in demand for mezcal beverage across the globe. As a result of a surge in demand for mezcal beverages, key manufacturers are leveraging the market demand by carrying out strategic mergers & acquisitions, partnerships, and joint ventures to increase their geographical presence. For instance, Bacardi Ltd., a Bermuda based independent spirit producer forayed into the mezcal category in 2017 by acquiring Ilegal Mezcal, the Guatemala based mezcal manufacturer.

Mezcal beverage in the last couple of years has witnessed widespread popularity across the globe. Millennial populations are largely inclining towards the consumption of craft beverages, which is driving the mezcal market growth. Additionally, increasing disposable income worldwide coupled with strong e-commerce channels is creating promising opportunities for mezcal manufacturers around the world. Off late, many manufacturers of mezcal beverages are using larvae (Gusano Worm & Chinicuil) in most of the mezcal to enhance the flavor of mezcal beverage. Strong investments by the big spirit players in the mezcal category are anticipated to create productive opportunities for mezcal market in the near future. Additionally, global players are focusing on strategic initiatives to increase its geographical presence. For instance, acquisition of super-premium alcohol brands Montelobos Mezcal and the Ancho Reyes liqueur by Davide Campari-Milano S.p.A. for approximately USD 35.7 Million in 2019. Montelobos Mezcal is an artisanal mezcal crafted by Mexican distiller Iván Saldaña, an expert in agave and mezcal.

What is the estimated growth rate of the global mezcal market?

Global mezcal market is projected to register a moderate 11.3% CAGR in the forecast period.

The massive demand for mezcal due to the growing preference for premium alcohol is the primary growth inducer of the market.

Which product type is expected to witness the highest growth?

The liquid segment is expected to observe substantial demand over the review period.

Which sales channel is expected to observe the highest growth?

The store-based segment is expected to secure the highest CAGR.

Who are the significant players operative in the global mezcal industry?