Marine Diesel Engine Market: By Type (Auxiliary and Propulsion), By Speed (Low-Speed, Medium-Speed and High-Speed), By Stroke (2-Stroke and 4-Stroke), By Application (Cargo Ship, Cruise Ship and Others), and Region - Forecast Till 2027 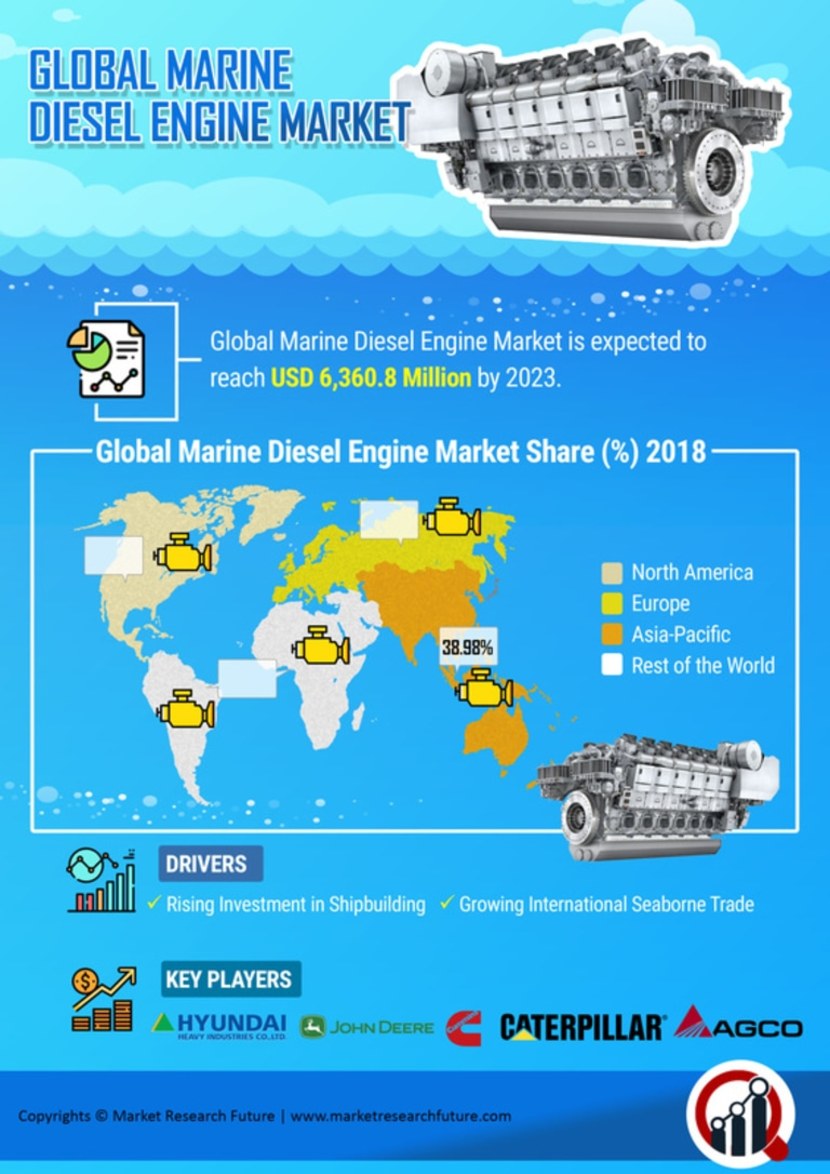 There has been an increased focus on managing energy-efficient Marine Diesel Engine that will extend to rapidly influence the Marine Diesel Engine market. Marine diesel engines convert a lot of thermal energy the fuel into mechanical energy in ships; this is really helpful. Modern marine diesel engine capacity can easily fluctuate between 40 and 416 kW (54 to 558 hp) and are commonly used in major cargo ships, most of the cruise ships and ferries, national military and government boats, industrial and small-scale fishing sector, modern auxiliary ships, landing craft, modern patrol boats, and several search-and-rescue vessels of current times. These Marine Diesel Engines have mostly become a basic necessity in modern ships nowadays. There are several factors that are supporting the spread of the market.

There has been a constantly increasing demand for modern renewal and generation of clean energy which expands the major demand for renewable Marine Diesel Engine, there are plenty of advantages over traditional ones, and rising demand, also because of lack of proper infrastructure are few of the primary drivers for the marine diesel engine Market Trends. The large part of Europe is estimated to be the quickest growing area.

The COVID 19 has affected 215 countries and the Marine Diesel Engine Market as well. To combat the negative effects, countries lead lockdowns that have adversely affected the Marine Diesel Engine Market. The pandemic leads to several challenges to the sector; it is affected all over the world. Plenty of factors like the risk of uninterrupted production, supply chain, distribution, lack of workforce employees, and much-decreased development activities have primarily affected the ongoing demand and supply. People are not as active as earlier. Major strategic developments are taking place. MNC are investing more in the marine diesel engine Market Growth of the increasing demand from consumers across the globe.

The market players for the marine diesel engine industry are:


The modern-day Marine engines are easy-to-use machines that are widely utilized to provide daily power needs to marine vessels like large commercial vessels, plenty of offshore support vessels, and other vessels. These types of engines consist of plenty of components such as a modern crankshaft, liner, various pistons, bedplate, and a number of heads. These tiny but major components are usually constructed with various corrosion-inhibiting materials, and their advanced seals & bearings are very much specifically designed for the various sea operating environments. The primary development of latest technologies and various manufacturing processes in the modern marine engine market has addressed the various local environmental regulations that eventually take the pertaining emission of various harmful gases. Several Characteristics like advanced fuel efficiency, very low easy maintenance, very high performance, excessive durability, quiet operation, and extremely low harmful emissions make the marine engines very ideal and suitable for marine applications.

Due to the rapid and excessive growth in various shipbuilding activities, throughout the globe, in modern times is one of the extremely crucial factors which is driving the actual demand in the marine engine market. There has been increasing demand for various luxury vessels such as modern-day cruise and yachts; as a result of superfast increasing daily disposable income amongst the various individuals has been a primary sponsor to the rising demand in the marine diesel engine market. The worldwide rise in excessive demand for various commercial vessels such as different bulk carriers and several gas carriers has undoubtedly contributed to the higher growth of the marine diesel engine market.

There are four major regions across the globe that are majorly involved in the global Marine Diesel Engine Market – North America, Europe, Asia Pacific region, and Rest-of-the-World (RoW), depending upon the country-level market sizing. The marine diesel engine market analysis is very comprehensive; you have to understand each and every player in the market. There is no debate that in spite of the occurrences of COVID 19, the latest trends and future opportunities of the marine diesel engine market value will see tremendous spreading opportunities.


The outbreak of COVID-19 has hard severely knocked out the growing pace of marine diesel engines because of mandatory closures of consumer markets and factories across the globe, the profit share of the companies has been shrinking. COVID19 has disrupted the entire supply chain. Prolonged lockdown had a negative influence and affected the morale of the big companies.


The marine diesel engine is projected to touch the earnings of an all-time high in 2023, according to an in-depth detailed report by latest Market Research Future (MRFR). Around a CAGR of 3.83% is projected during the assessment period (2023) because of the impressive demand. Lots of factors are boosting the concept. The companies are planning and executing current business operations through innovative techniques. Many factors affect the growth of the marine diesel engine, such as market size, trends in global technology, capital investment, etc.


In case of the marine diesel engine Market Outlook, the report claims to have a 3.83% of CAGR by 2023 and a revenue of USD 6,300 Million by the year 2023. The demand and craze for it is rising, which has increased market growth. It is also estimated to increase at the most elevated speed over the given figure time frame, which is spreading or expanding across different industry verticals. Additionally, government support and customer interest are helping the market to expand. The development is primarily credited to little and medium undertakings or companies where fewer effort arrangements are significantly required.

By Division by Structure

The worldwide marine diesel engine market is projected to witness great substantial growth during the estimated time period because of factors, for example, increasing demand for industrialization, huge investment in water infrastructure, development in various and large scale industries such as water & wastewater treatment industries, persistent demand for various operational safety in the definite energy sector, along with the huge rapid expansion of the huge power sector, is also acting as another primary growth-inducing factor.

On the basis of Geographic Segmentation:

The regional analysis of several marine diesel engine market is being divided and studied, such as Asia Pacific, North America, European nations, and rest of the world countries. As per Geographical, North America is projected to be the biggest market in terms of profit contribution due to increased adoption of several cloud-based services by way of production systems and by several distribution channels. In addition to this, the countries of Asia Pacific are projected to grow rapidly in marine diesel engine market due to increasing investment. Also, there has been a rise in demand in major developing countries. For example, India and China are projected to lead growth in several marine diesel engine market markets in different Asia-Pacific regions.

There is no doubt; North America is leading the marine diesel engine market due to the presence of the grand global players in this particular region as well as increased technological advancement.

Who are the top players in marine diesel engine market?

What will be the global forecast for marine diesel engine market?

What are the leading segments included in marine diesel engine market?

Marine Diesel Engine Market has been segmented By Type (Auxiliary and Propulsion), By Speed (Low, Medium and High-Speed), By Stroke, By Application (Cargo Ship, Cruise Ship), and Region.

What are the Regions included by marine diesel engine market?

Which region is expected to hold the highest market share in marine diesel engine market?

Considering the global scenario, the Asia Pacific is considered to be the most attractive region for marine diesel engine market. APAC represented more than one-third share of the market in 2019 and is set to grow at a healthy pace in the forthcoming years.