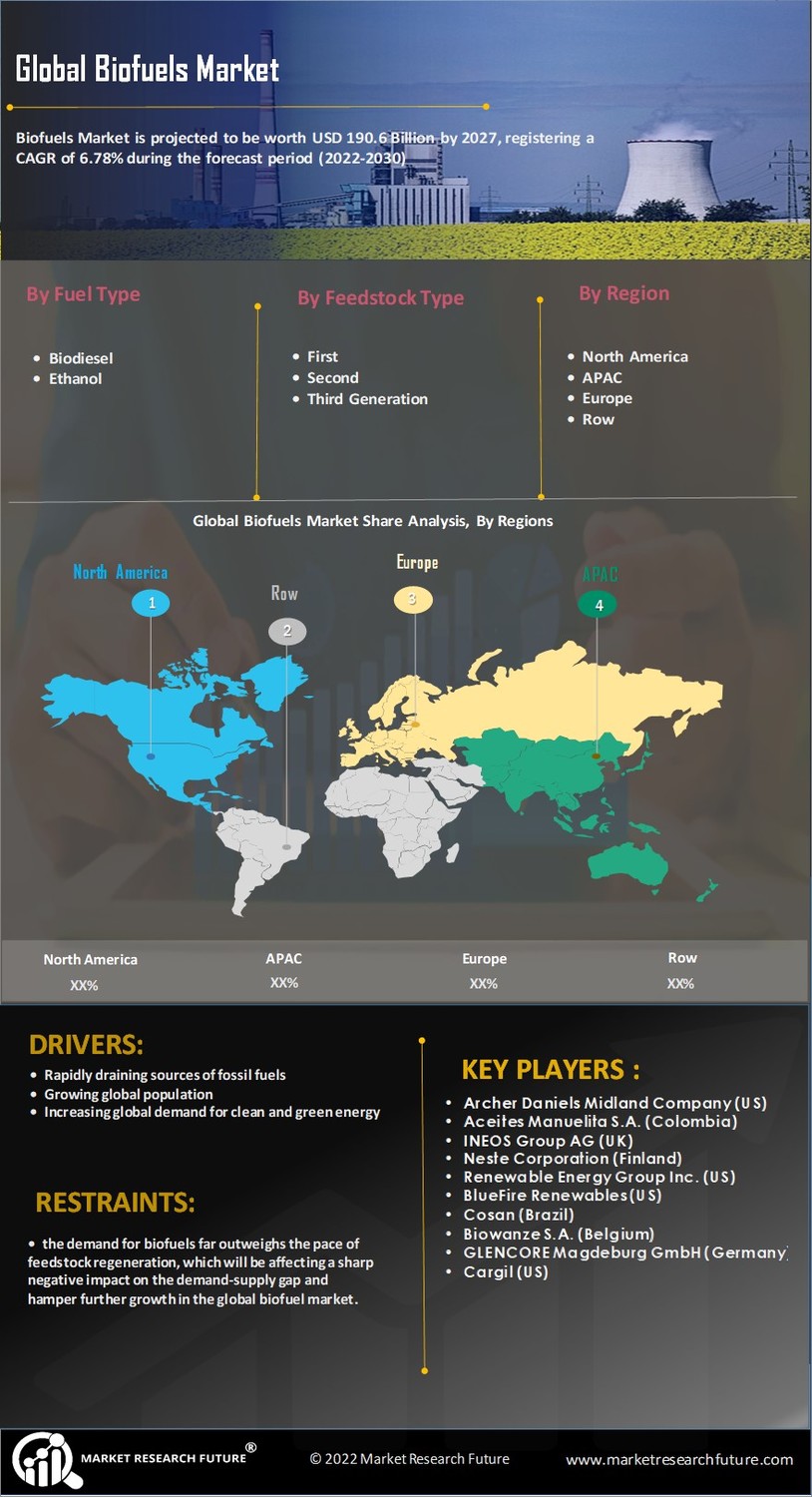 According to the latest research report, The biofuels market size is expected to grow at a CAGR of 6.78 per cent from 2020 to 2027, with an industry worth of USD 190.6 billion, according to a report published by the International Energy Agency. Anaerobic digestion, agricultural, commercial, home, and industrial wastes all contribute to the production of biofuels. Its applications in the infrastructure and energy industries are almost limitless. As a result, the report provides a comprehensive analysis of the industry, with particular consideration on the aspects that will impact the worldwide valuation throughout the projection period.

It is possible to produce biofuels from plants or anaerobic digestion using various methods, including agronomic, industrial, household, and industrial waste. Its applications in the energy and transportation industries are almost limitless. To have a complete picture of the worldwide market price over the projection timeframe, a market study analyses the market in its entirety. Government regulations have fueled the increasing demand for biofuels in many affluent countries to incorporate biofuels into motor gasoline. Renewable energy consumption in the road transportation industry is dominated by biofuels like ethanol and biodiesel, which account for the vast majority of the total.

The erosion of demand caused by Covid-19 has significantly influenced the worldwide gasoline industry. Pandemic-related restrictions such as work-from-home policies and other restrictions on public transportation resulted in significant travel disruptions. As a result of worldwide lockdowns, the need for transportation fuels decreased significantly throughout the world, which severely influences the biofuels they mix with. The demand-supply characteristics of the oil sector also caused a decrease in oil prices, which harms the overall biofuels industry and diminishes the profitability of biofuels.


Due to the fast depletion of fossil fuels resources, rising worldwide population numbers, and strict environmental standards that are reacting to the increasing worldwide need for sustainable green energy, the business will rise.

In addition to being widely and economically utilised incorporate heating operations, biofuels have a slew of other uses in industries, including automotive, naval, and railway. The worldwide biofuels market value benefits significantly from increasing requirements from these industries, and this trend is expected to continue throughout the projected period, keeping revenues high.


In light of biodiesel being a sustainable fuel, the biofuels market is expected to increase rapidly throughout the projection period. It is estimated that biodiesel, in particular, is the most widely used biofuel, as the automotive industry and the globe are at a significant move for environmentally friendly developments in the transport industry. A bonus, sophisticated liquid biofuels derived from feedstock, including fats, lignocellulosic and waste oil, and municipal waste, have been identified as economically feasible possibilities for reducing the carbon footprint of transportation sectors like aviation transportation and shipping.


There are several well-defined restricting variables in the biofuels industry that will impact the long-term market picture. Biofuel demand is outpacing the speed of feedstock rejuvenation, which will negatively influence the requirement gap and slow down the worldwide biofuel market growth.


Even though alternative fuels have become more prevalent in the worldwide fuel markets, the transportation industry will be controlled mainly by oil while the desire for biofuels grows. The worldwide dominance of oil as a significant vehicle fuel is not in jeopardy, despite a decline in market dominance in the future years.


In 2020, the worldwide biofuels market was expected to dominate the bioethanol category, with a market dominance of 71.3 per cent. Burning bioethanol causes less pollution since it is derived from biological sources. Photosynthesis is the primary means plants convert CO2 into sugars and other organic compounds that aid in their growth. As a result of its production and energy combustion process, bioethanol can be a carbon-neutral energy source. Carbon monoxide pollution from aged automotive engines is also reduced as a result.

Additionally, bioethanol can be mixed with conventional energy sources without engine changes, making it vital for the biofuels industry. Engines powered by gasoline may utilise bioethanol as an alternative fuel source. Any combination of gasoline and ethanol is possible. Up to 15 per cent of current gasoline engines can operate on bioethanol-petroleum mixes.


According to the reports, the global biofuels market are broken down into numerous kinds depending on characteristics, including fuel type, feedstock type, and geographic location, among other things. The solid biofuel form was the fastest-growing sector in the biofuels market outlook throughout the projection timeframe, with a profit of a CAGR of 8.5%. The increasing use of biogas for electrical production is to blame for the increase. As an alternative to currently accessible conventional energy sources, solid biofuels are also developing as a green option for home heating in both buildings.

There has been an increase in gaseous biofuel use in fuel source and power production, resulting in the 2nd most significant market sector for 2019. As an environmentally friendly alternative to gasoline, the gaseous form may also be used for cooking.

The market is segmented based on fuel, feedstock, and geographic location. The global biofuels market trends are expected to witness decent growth during the forecast period.

Based on the application, the market is segmented into Biodiesel and Ethanol.

According to the reports, based on region, the global biofuel market is divided into the Asia Pacific, North America, Europe, the middle east and Africa, and South America. The biofuels market's most considerable section is North America in terms of geography. The rise of the biofuels market demand in the area will be facilitated by the availability of infrastructure upgrades and favourable government regulations. Biofuels like renewable natural gas and biofuel are gaining popularity because of their low-cost, availability in large quantities like soybeans and advantageous government incentives. The United States and Canada have maintained their position as significant players inside the North American marketplace. The biotech industry in the U.s. is among the most sophisticated globally, making it possible to produce commercially viable biobased goods. According to the USDA, biofuels are taking the place of conventional petroleum-based energies in this area. Because of several government measures to promote biofuels in various sectors, Canada is a prospective opportunity for biofuel production.

Comparatively speaking, the global biofuels market is still in its infancy when linked to another furl markets. Regarding policies and legislative framework, it lacks the fundamentals to allow new competitors to impact the business significantly. This makes the market a very competitive one consequently

An amazing recent renewables standard, part of the amended Energy Bill, has placed the biofuels sector on a path toward greater success. There is a goal for the country's biofuel output to reach 36 billion billion gallons per year by the end of the year 2022, with 21 billion gallons originating from advanced biofuels, which may be made utilising a variety of feedstocks and technology.

At what CAGR can the biofuels industry expand?

Over the assessment period, the biofuels market can surge at 6.78% CAGR.

What is the estimated valuation for the biofuels global market?

MRFR finding reveals that the biofuels market can value at USD 245.48 Billion by 2027.

Who are the key players of the biofuels global market?

Cosan (Brazil), GLENCORE Magdeburg GmbH (Germany), Biowanze S.A. (Belgium), and Cargil (US) are some renowned players of the biofuels market.

What is the biofuels global market growth driver?

The rapid replacement of biofuel over fossil fuel can spur the global biofuel market growth.

What is the regional analysis of the biofuels global market?

The US curbing tax on the use of biofuel can bolster the market growth in North Amercia.

What are the 2 main types of biofuels?

The two most common types of biofuels in use today are ethanol and biodiesel, both of which represent the first generation of biofuel technology.