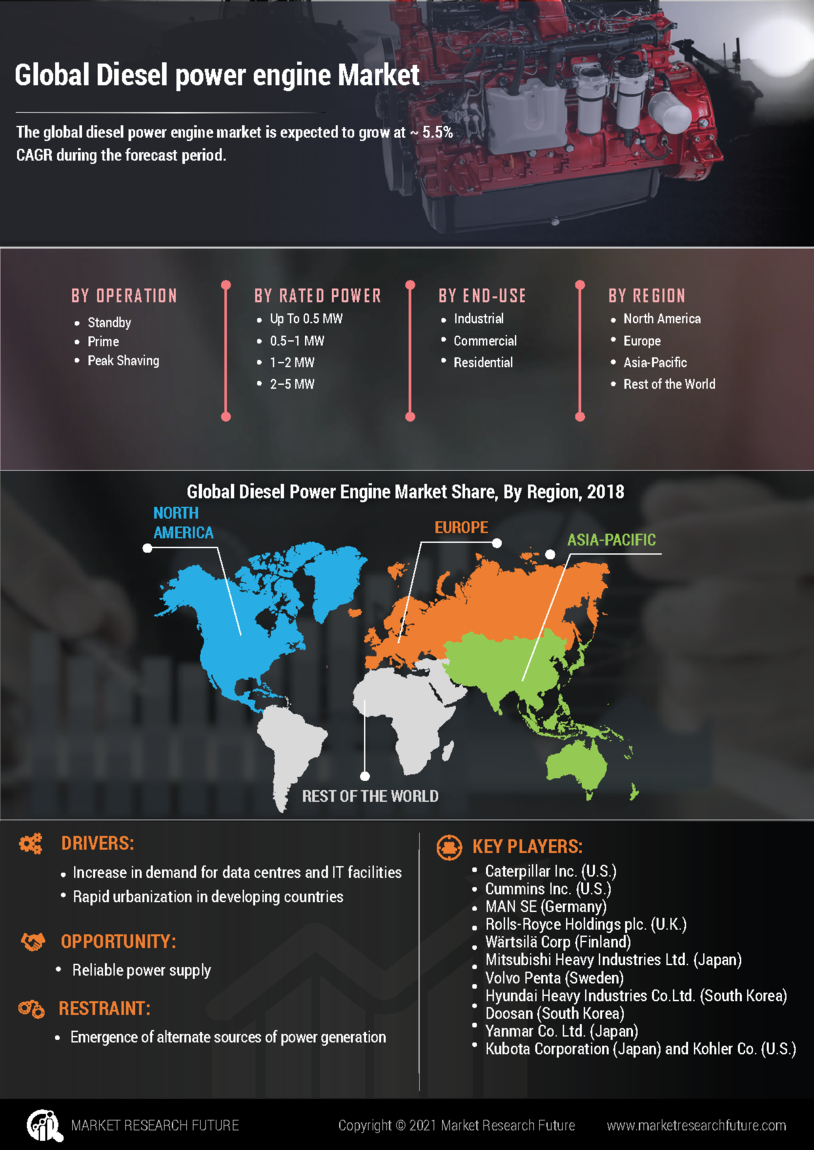 Diesel power engine market is expected to grow at USD 8.02 Billion 4.22% CAGR during the forecast period.

The global diesel power engine market is expected to witness a stagnation in growth during the forecast period. This is due to the considerable growth in the power sector with population boom along with the rise in energy demand in various regions. The growth is primarily attributed to the need for uninterruptible power by major end-user across all the regions. The Asia Pacific region is expected to grow at the highest CAGR from 2017 to 2022, wherein China was the largest country-level market, followed by India and Japan. The market in Asia Pacific is driven by the rise in demand for reliable power supply, rising power generation capacity, and the growth of the manufacturing and processing industries.

The diesel engine is an internal combustion engine that uses the heat of compression for ignition of a fuel charge. Mechanical ignition components used in gasoline engines, such as spark plugs, coils, and distributor assemblies, are not required for ignition. Instead, as the piston in a diesel engine cylinder moves upward on its compression stroke, it compresses the air in the cylinder. The air temperature in the cylinder increases to ignite the diesel fuel as it is injected into the cylinder. Despite the fundamental difference in the way, ignition occurs, the major components of a diesel engine are similar to those found in a gasoline engine. Both, the engines have a cylinder block, crankshaft, valve train, camshaft, pistons, and connecting rods. They both require a lubrication system and a cooling system.

Diesel power engines are used in various sectors such as industrial, commercial, and residential for standby, prime, continuous, and peak shaving. Increase in demand for data centres and IT facilities, and rapid urbanization in developing countries, are projected to drive the market. However, the emergence of alternate sources of power generation may restrain the market growth.

The global market of diesel power engine is projected to have a considerable number of developments over the forecast period owing to continuous technological advancement in energy sector coupled with growing power demand. The market is also expected to have high expansion activities by multinationals and well-established companies. Mergers and acquisition activities are expected to be seen over the forecast period with numerous contracts and agreements between top EPC and Government, across the globe. 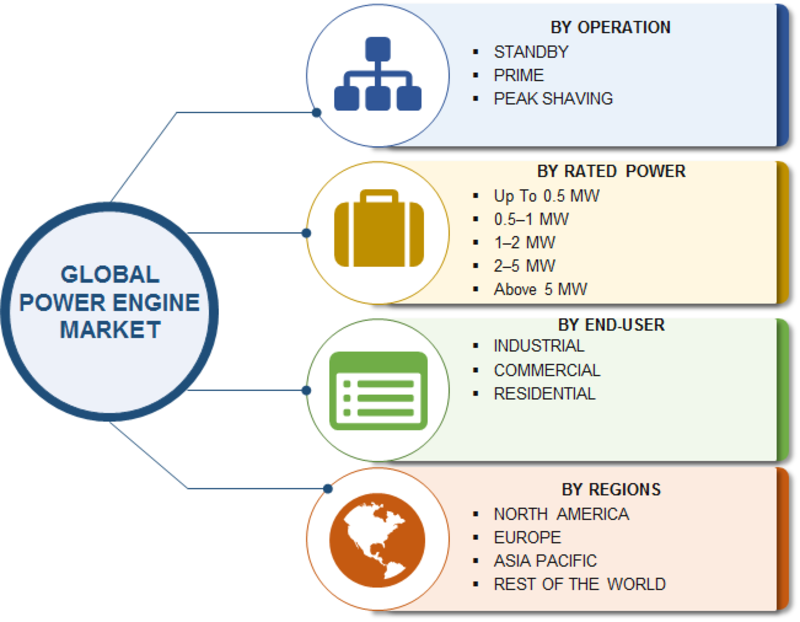 Global diesel power engine market has been segmented based on operation, rated power, end-user and region. Based on the operation the market is segmented into standby, prime, and peak shaving. Among these, the standby segment is estimated to dominate the market in 2017. Also, it is projected to grow at the highest rate during the forecast period due to the increased requirement for backup power in various applications such as residential, hospitals, and power plants for quick power generation. Based on the rated power, the market is segmented into Up To 0.5 MW, 0.5–1 MW, 1–2 MW, 2–5 MW, and Above 5 MW. The 1 MW-2 MW segment is estimated to dominate the market in 2017. Diesel engines of this power rating are used in large residential areas, commercial buildings, universities, and industrial applications for standby and prime applications. Moreover, the growing urbanization and industrialization in regions such as Asia Pacific and the Middle East, are expected to power the growth of this market in future. Based on the end-user, the market is segmented into industrial, commercial, residential. The industrial segment, by end-user, is estimated to be the fastest-growing diesel power engine market, during the forecast period. The industrial segment includes power station, oil & gas, and others such as mining, chemical, and manufacturing. The growth of this segment, especially in Asia Pacific, South America, and the Middle East & Africa, is expected to drive the market. The higher requirement of power generation in these regions is expected to drive the demand for diesel power engine.

The operation, rated power, end-user are the segments of the market.

What factor is hindering the market?

The emergence of alternate sources of power generation will restrain the market growth.

What factor is driving the market’s growth in the forecast period?

The diesel power engine market will witness a considerable number of developments because of continuous technological advancement in energy sector coupled with growing power demand.