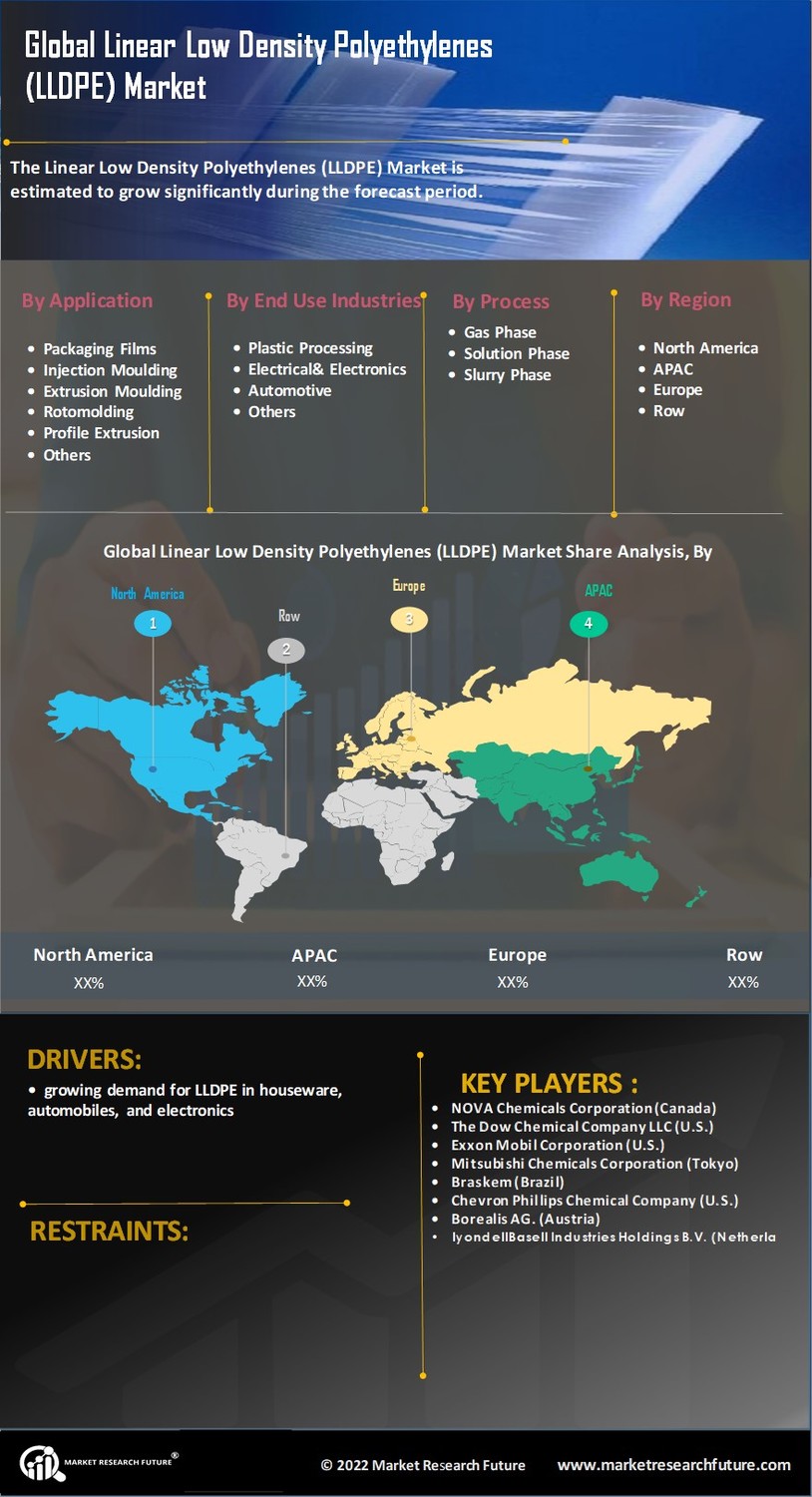 Linear Low-Density Polyethylenes Market Overview LLDPE stands for linear low-density polyethylene, which is made by copolymerizing ethylene with butane, octane, and hexane. Ethylene is a natural gas and petroleum-derived organic molecule. Its higher temperature resistance and tensile strength make it a popular choice over traditional linear density polyethylene. It also has a great impact on strength, flexibility, chemical resistance, odorless ness, and transparency. The expansion of the Linear Low-Density Polyethylenes (LLDPE) Market is predicted to be fueled by increasing demand from various end-use sectors such as housewares, automotive, electrical & electronics, and others. It is available in the market as colorless and odorless plastic granules and pellets. Extrusion coating, roto-molding, packaging film, and injection molding are just a few of the industrial applications for these pellets. The expansion of the Linear Low-Density Polyethylenes (LLDPE) Market is primarily driven by its use in the plastic manufacturing industry. Plastic packaging films are divided into two categories: food packaging and non-food packaging films. Furthermore, due to qualities such as heat resistance, flexibility, and simplicity of sealing, it is widely utilized in the food packaging business. The non-food packaging sector is primarily driven by the widespread use of thin films due to their low production costs. In addition, rising demand for non-food packaging films in the agriculture sector for irrigation is likely to boost demand for profile extrusion products. This program is used to make pipes, tubes, and other similar items.

North America is the leading market in terms of revenue due to high demand for the material in application of packaging films, extrusion coating and rotomolding. The U.S. is the leader of food packaging industry in the region. This is attributed to the large manufacturing base of the giant players in the country. Further, the growing demand from various end use industries such as building & construction, automotive industry, electrical & electronics Industry is expected to propel the demand for Linear Low Density Polyethylenes (LLDPE) Market.

Asia Pacific is the fastest growing market in terms of value & volume. The growing packaging and retail industry in the region owing to the increasing demand for instant food delivery market in the emerging economies such as India, china and Japan is a major factor in the growth of the Linear Low Density Polyethylenes (LLDPE) Market.

Europe is expected to witness a surge in Linear Low Density Polyethylenes (LLDPE) Market owing to the growing automotive, electronics, food packaging and power & telecommunication industry. In terms of value added the food & beverage industry is estimated to be the largest in manufacturing sector in the region. Further, rapid growth in exports of automobiles globally is likely to increase the consumption of LLDPE by the industry. Stringent government regulation to limit the use of LLDPE hampers the growth of the product in the market. Furthermore, the growing power & telecommunication industry induces the manufacturing of supporting electrical equipment’s like cables & wires is expected to propel the demand for the product in the region.

Increasing exports of polyethylene & packaging films in the Linear Low Density Polyethylenes (LLDPE) Market owing to abundant production of petrochemicals in the region is likely to propel the demand for LLDPE in Middle East.

On the basis of the Application, the Linear Low Density Polyethylenes (LLDPE) Market is segmented into packaging films, injection moulding, extrusion coating, rotomolding, and others.

On the basis of the Process Type, the Linear Low Density Polyethylenes (LLDPE) Market is segmented into gas phase, solution phase, and slurry phase.Recent Development


The market for low-density polyethylene is highly consolidated and the companies such as  Exxon Mobil Corporation, LyondellBasell Industries Holdings BV, Dow, LG Chem, and Chevron Phillips Chemical Company are among the market's key participants who have contributed the most to the market growth. On November 30, 2020, Formosa Plastics USA opened a 400,000-ton-per-year low-density polyethylene (LDPE) factory in Point Comfort, Texas. LLDPE resin manufacturers are also focusing on partnering with key market players and expanding R&D.

LLDPE is a copolymer produced from copolymerizing ethylene with butane, octane, and hexane.

What are the major applications of LLDPE?

The growing demand for LLDPE in houseware, automobiles, and electronics is the major driver for the LLDPE market.

North America is the leading revenue generator in the global LLDPE market.

Leading players in the LLDPE market include NOVA Chemicals Corporation, Dow, and ExxonMobil, among others.

LLDPE: Low cost of gas phase process is expected to boost the demand for LLDPE in the global mark...