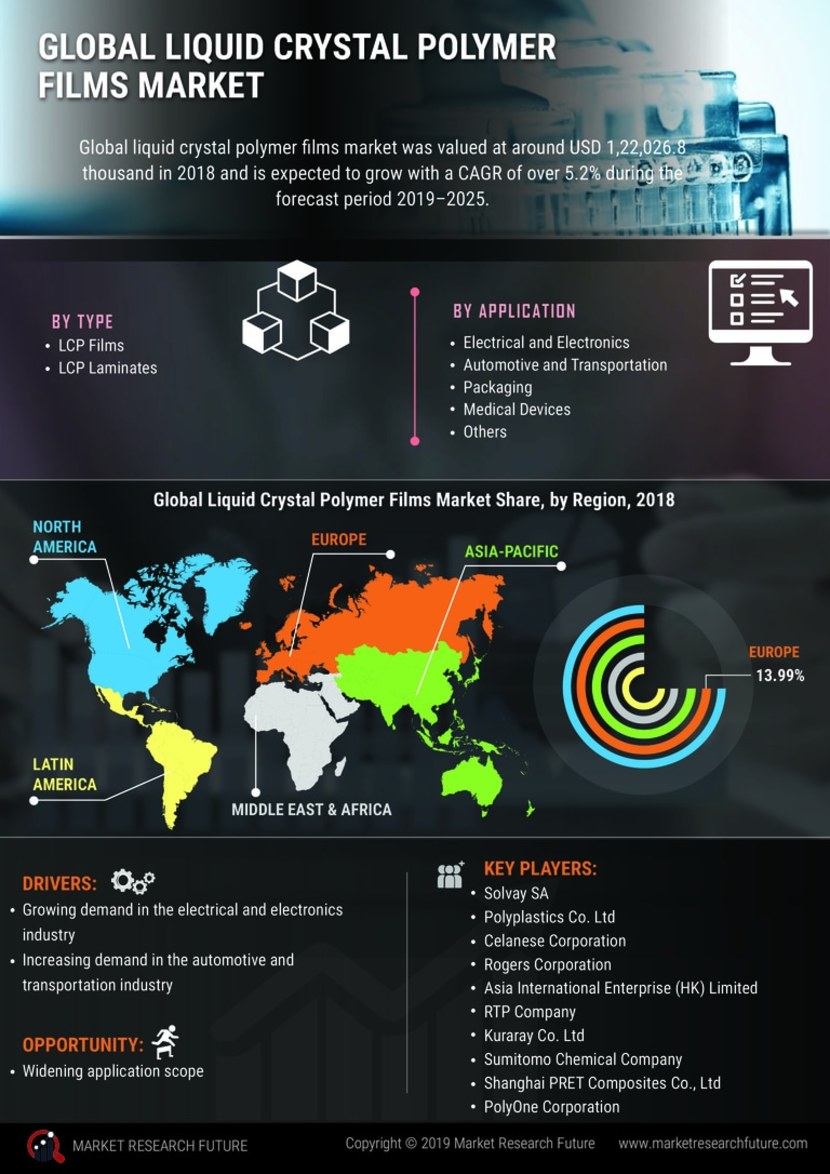 Global Liquid Crystal Polymer (LCP) Films and Laminates Market, according to MRFR was valued at USD 115,912.0 Thousand in 2017 and is poised to register a CAGR of 5.85% to reach around USD 162,116.7 Thousand by the end of 2023. During the prognosis period, the expanding automobile and transport industries are both expected to fuel the growth of the global economy.

The outbreak of COVID-19 has had an effect in many aspects, such as flight cancellations, travel bans and quarantine, closed restaurants, confined all indoor activities, proclaimed state of emergency in over forty countries, major supply chain slowdown, instability in the stock market, declining consumer morale, rising population hysteria, and potential confusion. Due to the industrial shutdown caused by the COVID-19 epidemic, the global Liquid Crystal Polymer (LCP) Films and Laminates industry faces supply-demand shortages. Disruptions in the availability of raw materials are expected to hamper full-scale activities. The lack of suppliers has also contributed to rising costs of raw materials. In order to recover, the damaged downstream supply chain will take longer. As logistical systems were disrupted due to the COVID-19 epidemic, the industrial closure also adversely affected food and inventory transportation.

The global liquid crystal polymer (LCP) films & laminates industry is in the process of transforming itself due to a rising need for lightweight and viable materials in a variety of end-use industries. It helps to push the market with characteristics such as temperature tolerant to certain thresholds, moisture resistant, low dielectric constant, non-halogen flame-retardant power-producing. The growing demand in the electrical and electronics industries for LCP films and laminates is expected to be a major factor driving the growth of the global market for liquid crystal polymer films and laminates. The introduction of smart windows is contributing dramatically to the need for these laminates and films. Smart windows can render the transition from opaque to translucent and are also excellent for energy consumption, visibility and natural light.

It is expected that widening the scope of application of LCP films and laminates would generate new growth opportunities for players operating in the global market for liquid crystal polymer films and laminates. Different technical advancements and developments have paved the way for robust and high-grade films and laminates with low maintenance costs, renewable properties and better performance features, such as outstanding module efficiency, low coefficient of thermal expansion, high resistance to abrasion, reduced absorption of moisture, and superior flexibility. Thus, in the near future, the global demand for LCP films & laminates is predicted to benefit greatly from this.

However, during the forecast period, the high cost and low-weld properties of LCP are expected to impede the growth of the global market. In addition, the problem of metal adhesion during laminate forming is expected to be a major challenge for players operating in the global market. Due to small bi-phenol producers, global market supply restrictions will create a supply-demand gap and impact the market value of liquid crystal polymers.

The LCP film section accounts for the largest share of valuation due to its large-scale use and has high utility in lamination applications. The use of low-cost, lower cost, and translucent LCP films as a substitute for conventional polyimide substrates is expected to increase demand in the coming years.

The electrical and electronics industry is the highest by size in the electronics market. The segment made a total of USD 91502.7 million last year. The demand for LCP films and laminates is expected to increase in the futre, driving the development of the electrical and electronics market. The car and transport sector is one of the biggest and is expected to continue growing over the next five years. LCP film is used in high-performance blow-molded vehicle gas tanks. LCP films are an excellent substrate for versatile antenna development, and this will positively impact the automotive and transport markets.

The medical device application segment is expected to see considerable growth over the forecast period There is an increase in medical technology production along with a spike in the numbers of medical device and service suppliers. The sum medical device companies invest on research and development and the fast introduction of low-cost LCP are expected to fuel market growth.

Asia-Pacific is the biggest buyer of strawberries in the world, owing to rapid industrialization in the region. The regional market is estimated to hit USD 93,717.5 thousand by the end of 2023, rising at a CAGR of 6.06 percent. Asians today form the largest group of customers in the world owing to rising disposable income and changing lifestyles. The shifts in customer interests after the introduction of advanced IT infrastructure and telecommunications technology in the region would cause more development in the region in the next few years. Asia will be followed by North America and Europe. China is the most dominant electronic market in the world and is a formidable rival to existing upstream suppliers. The computer industry, such as smartphones, OLED TVs, and tablets, experiences the fastest growth rate in the consumer electronics sector of the market, in terms of demand.

The Asia Pacific industry is followed by North America, which is the second largest market for liquid crystal polymer films and laminates. It is forecasted that North America will hit USD 33,980.1 by the end of 2023. The United States would see significant gains over the projected timeframe because of developments in medical industry leading to the use of lightweight, robust and high-performance technologies. Efforts should be made to maximise scientific expenditure on new product production harnessing exceptional qualities including mechanical ability, heat resistance and chemical inertness.

Europe led by Germany, the United Kingdom and France is expected to rise over four and a half percent during the forecast period. The involvement of big automotive OEMs and customers who want to purchase high-end vehicles should help sales. Latest advances in automotive electronics boost the attractiveness of liquid crystal polymer, a display material.

The market is highly fragmented and the major players have used a range of tactics such as new product releases, extensions, alliances, acquisitions, and others to expand their share in this market.

July 2020: Japan's Daicel acquired the stake of its affiliate Celanese Industries, a pioneer in polylactic acid, in the polylactic acid joint venture. The transaction has an approximate valuation of $1.5 billion. An engineering plastics joint venture in Japan will eventually go public and be purchased by a single owner.

What is the growth rate of the global liquid crystal polymer (LCP) films market?

What is the valuation of the global LCP films market?

What was the previous valuation of the global LCP films market?

What is the major driver of the global LCP films market?

Applications in electric & electronics is the major driver of the global LCP films market.

Who are the major players of the global liquid crystal polymer (LCP) filmsand laminates market?

Increasing Use In The Electricals And Electronics Industry Is Expected To Propel The Growth Of Th...