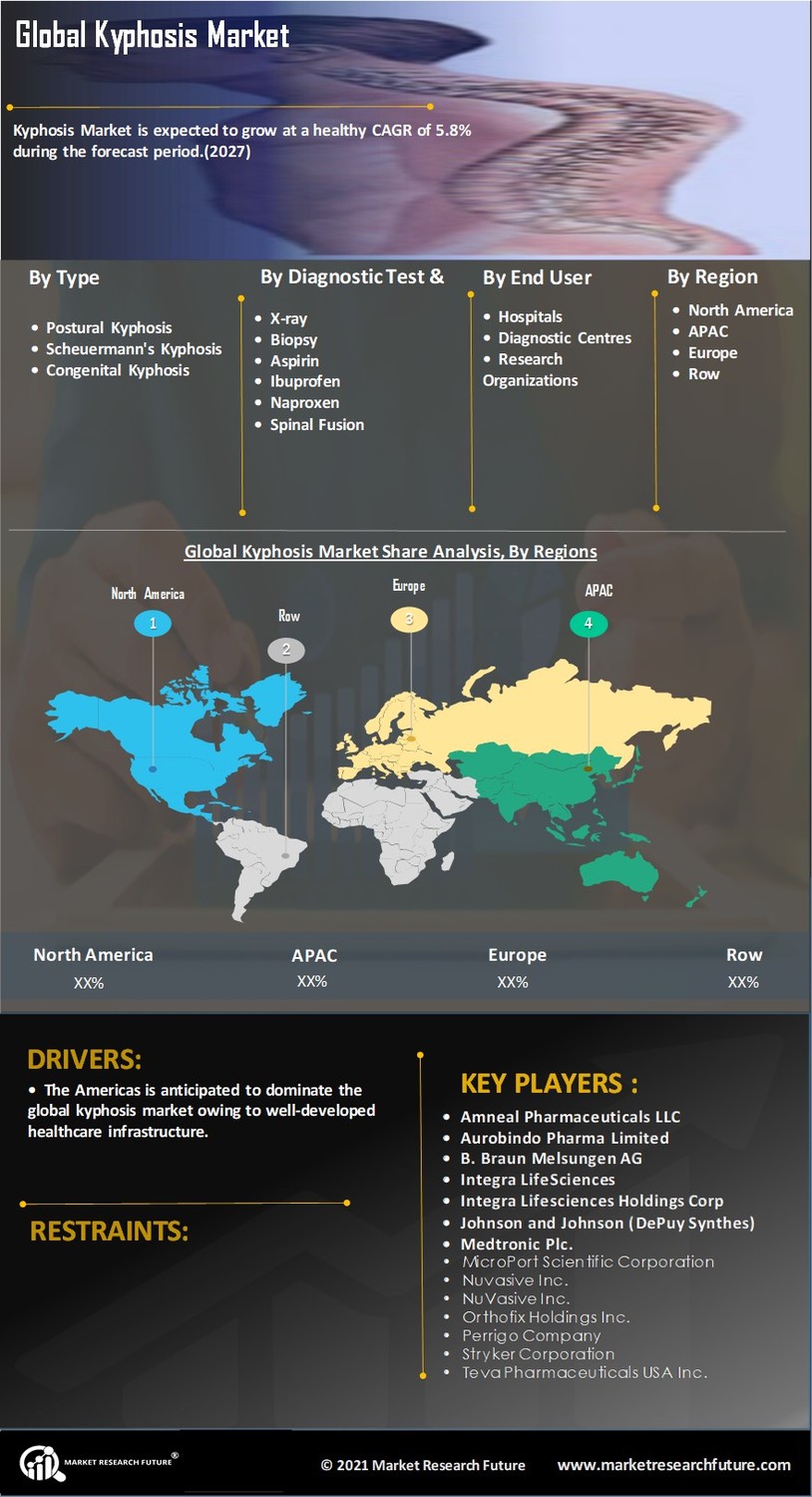 The kyphosis market is projected to reach USD 732.4 Million by 2030 at 6.3% CAGR during the forecast period 2022-2030. The global kyphosis treatment market is estimated to gain substantial market revenue and growth in the upcoming forecasted years especially during the ongoing forecast period. The global treatment trends help to understand the increasing prevalence of osteoporosis and recognize it as the driving force for kyphosis market operations and growth.

There has been a propelling demand for the global Kyphosis treatment market and the same is expected to reach an excellent stage especially during the ongoing forecast period. The global demand for the treatment has increased significantly because of the increasing prevalence of Kyphosis followed by the rising healthcare expenditure which will boost the market growth as per the predictions that have been laid for the ongoing forecast period. Moreover, the increasing research and development by prominent market players will create new opportunities in the kyphosis market.

Kyphosis, as a major focus of the global market, can be understood as a condition in which the upper back gets rounded. This condition is also popularly known as the round back. It is a common problem that tends to occur during adolescence and it occurs at any age. Wrong sitting posture is known to be the primary cause of the disease. In some cases,, it doesn’t require treatment and can be cured through natural processes like yoga and exercise.

The sudden arrival, spread, and the outbreak of the novel coronavirus pandemic have created an endless amount of issues for the market players that are playing a major role in the expansion of the kyphosis market that was projected by the business chiefs that have been set for the ongoing forecast period. The outbreak of the pandemic has been giving rise to the demand for medical emergencies to treat the patients that have tested positive for the virus. The lockdown followed by the virtual working and online classes is hampering the posture of students and giving rise to the risks that give rise to the issues like a rounded back or kyphosis in other words. The disruptions introduced by the pandemic have been such that the treatment is not available as the medical professionals are dedicated to treating the patients that have tested positive for the virus.

The rise in the research and development followed by the investments that are on the way for the development of vaccines for different infection variants and also, for the treatment of the rounded back or kyphosis. The ongoing period has a positive approach for the market as the investments are increasing rapidly.

The Kyphoplasty devices as a prominent inclusion of the global market are expected to exhibit significant growth, and the main reason behind this is the changing lifestyle of people. The other driving factors for the global market are the adaptation of a sedentary lifestyle by the people that have led to physical inactivity, which involves high complications and a higher degree of risk. Even in patients with osteoporosis and osteopenia, physical exercise helps in reducing various kinds of risks of vertebral fractures. All these factors play an important role in developing the kyphosis market share during the ongoing forecast period.

However, the global market share is likely to witness the development of restraints that might hamper the market’s ability to meet the projected market growth. The emergence of market factors like the clearance of the products related to vertebroplasty and kyphoplasty by regulatory bodies is expected to obstruct the projected market growth during the forecast period. Also, there has been a dearth of awareness and limited treatment options that will hamper the market growth.

Technology and the rise of scientific developments in the medical field have a prominent role to play in helping to expand the market size and share of the kyphosis market during the forecast period. The global market highlights the technological expansions that are a result of the investments followed by the scientific approach and management will help the market grow and provide better aspects to the market investors.

The Kyphosis treatment market is segmented based on different aspects to meet the rising needs of the global target audience. The global market has been segmented based on the sub-heads like type, diagnostic test, treatment, and end-users. The growth of the global market among segments helps the market investors analyze niche pockets of growth and strategies to approach the market and determine the core application areas and the difference in the regional target markets.

The Kyphosis market is segmented based on the type into postural kyphosis, Scheuermann's kyphosis, and congenital kyphosis.

Based on the diagnostic test

The kyphosis treatment market is segmented based on the diagnostic test into imaging, biopsy, and others.

Based on the treatment

The kyphosis market is segmented based on the treatment into medications, surgery, and bracing.

Based on the end-user

The global kyphosis market is segmented into hospitals, clinics, ambulatory surgical centers,, and others.

Countries that are covered in the discussion of the global Kyphosis market report are the U.S., Canada, Mexico in the North American region, followed by the other ones like Brazil, Argentina, Peru, Rest of South America, as part of the Southern American region, Germany, France, the United Kingdom and many more. The market also extends its functions est of Europe in Europe, China, Japan, India, South Korea, Singapore, Malaysia, Australia, Thailand, Indonesia, Philippines, Vietnam, followed by the rest of the Asian Pacific region. The market is extended to Saudi Arabia, the U.A.E, Egypt, Israel, Kuwait, South Africa, the Rest of the the Middle East and Africa, and as a part of the Middle East and African region.

The major players covered in the Kyphosis market are as follows:

The syringe as a treatment has the capability of injecting cement as well as inflating and deflating the interventional devices. Hence, this is a major market factor that is expected to boost the demand for the vertebroplasty and kyphoplasty markets.

The growing prevalence of vertebral compression fracture, and according to the study of Osteoporosis International, in 2017, around 30% - 50% of people worldwide had witnessed a vertebral compression fracture. Also, according to the study of the Journal of Spine Surgery published in 2019, the kyphoplasty treatment that was performed for vertebral height restoration showed significant outcomes. Therefore, these prominent market factors are expected to propel the growth of the vertebroplasty and kyphoplasty market in this segment.

The kyphosis market research report has been prepared after studying the core market competencies and dynamics that are available for the ongoing forecast period. The global market report highlights the market challenges like coronavirus and others and the patterns that the regional players are following to convert the challenges into market opportunities for futuristic expansion. The report also helps to understand the market segmentation and rising competition with each passing day.