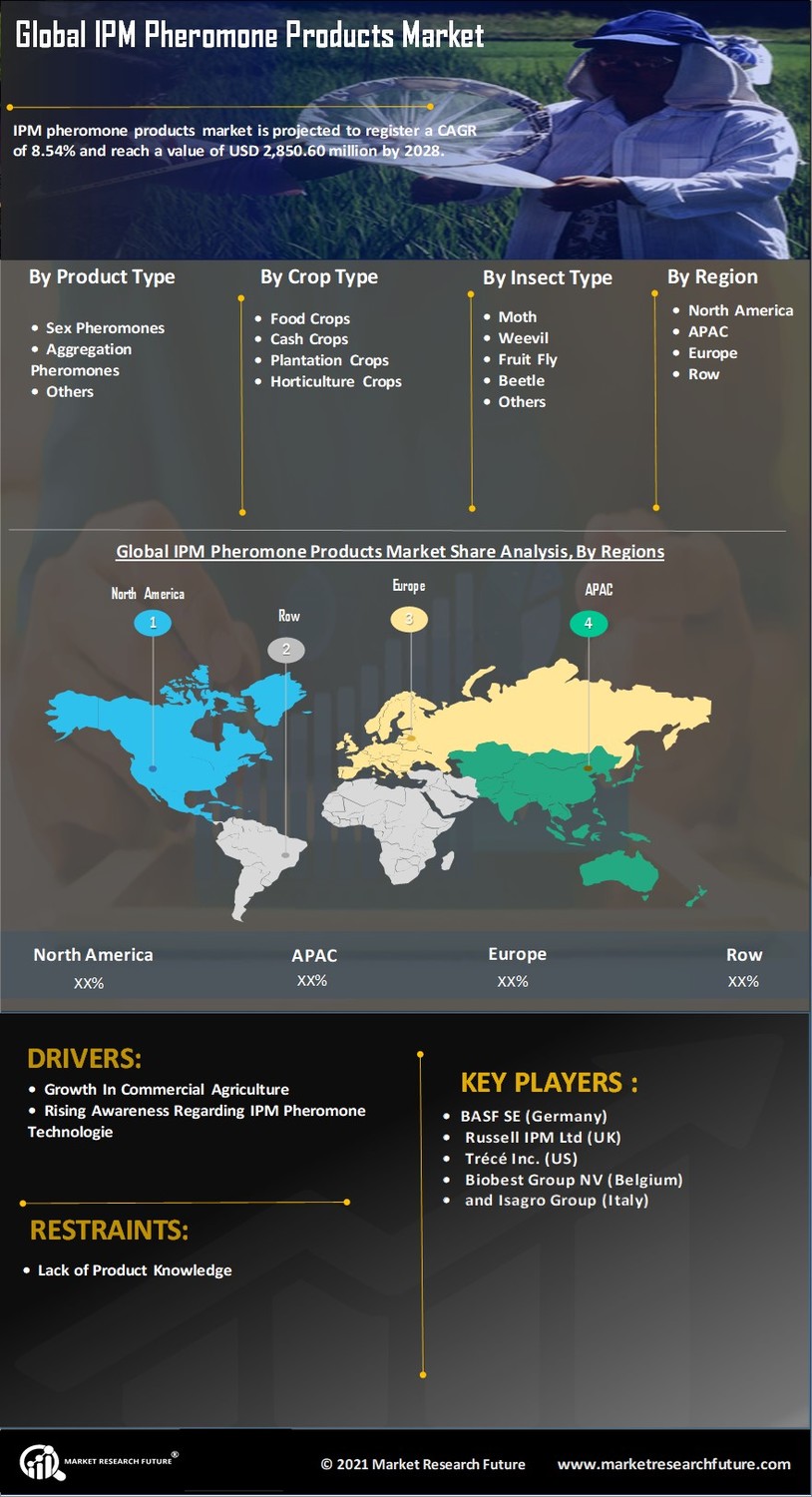 IPM pheromone products market is projected to register a CAGR of 8.54% and reach a value of USD 2,850.60 million by 2028. Insect pheromones are chemical substances used by an insect to communicate with other members of the same insect species. Structurally, these chemicals are often similar to chemicals used in flavors and fragrances. Insect pheromones are a subset of a broader category called semiochemicals. A semiochemical is referred to as a message-bearing substance produced by a plant or animal or a synthetic analog of that substance, which instigates behavioral response in individuals of the same or other species. Semiochemicals are widely used for various functions, such as attracting other insects to a known food source or trail, locating a mate, or sending an alarm. Sex pheromones are generally used in pest management. The insect pheromones themselves do not kill a target pest. Instead, it helps in either attracting an insect to a trap containing a lethal pesticide or disrupting the mating. With mating disruption, proportionately large concentrations of the sex pheromones are present in the air, which confuse the males and reduce their ability to locate a female with which to mate. Pheromones can also be used to monitor pest populations as a part of larger Integrated Pest Management (IPM) systems, particularly to determine the appropriate timing and application of pesticides.

The impact of COVID-19 has majorly affected the distribution and sales of different products across industries. Several countries are under lockdown and have sealed their borders to control the spread of the virus. Moreover, the workforce has been reduced largely. This is likely to affect the operations leading to numerous delays in production activities. Lockdown and quarantine measures have been applied to fight the COVID-19 pandemic; this has limited the production of IPM pheromone, thereby affecting crop protection activities worldwide. China is one of the few key producers and suppliers of plant protection products to many developed and developing countries. This has impacted the production of IPM pheromone globally.


Commercial agriculture is the large-scale production of crops for sale, intended for the widespread distribution of the crops to wholesalers and retail outlets. Commercial agriculture includes livestock production and livestock grazing. In commercial farming, the crops and the livestock are grown on huge farms, using machinery, irrigation methods, chemical fertilizers, and other technologies. Commercial farming is classified into various types, including dairy farming, grain farming, plantation farming, and livestock ranching. The increasing demand of commercial agriculture for the large-scale production of crops such as maize, wheat, tea, coffee, sugarcane, cashew, rubber, banana, cotton is driving the growth of the global IPM pheromone products market during the forecast period.


The lack of awareness and knowledge of IPM pheromone products among the farmers restricts the growth of the global IPM pheromone products market. Insufficient training facilities and inadequacy of IPM equipment are the major reasons that keep farmers away from IPM, while others are fully dependent on chemical methods for controlling the pests. Farmers are facing three types of barriers such as institutional, social, and management. Inadequacy of IPM materials, availability of pesticides, lack of coordination between farmers and extension agents, fear about the IPM program, and no discrimination about the price of IPM and non-IPM vegetables are some of the major barriers faced by the farmers to adopt Integrated Pest Management (IPM). All these factors are likely to hamper the growth of the market during the forecast period.


Successful Integrated Pest Management (IPM) is based on the farmer’s needs, concerns, and circumstances. A wide range of products and services are required by the farmers to adopt IPM. The pest control industry is constantly researching new technologies and products that will advance the way we prevent and manage pests. The IPM is now widely accepted in many industries as the standard for service is an environmentally responsible approach to pest control that focuses on proactive tactics such as facility maintenance and sanitation to prevent pests. Biorational materials are relatively non-toxic and have little impact on the environment. According to the researchers of the University of California, the “pheromone-assisted technique” maximizes the effectiveness of insecticides, especially for Argentine ants. The goal of pheromone is to enhance products that will control pests such as ant species and decrease the impact on the environment on non-target creatures and human health. Thus, technological advancements in several types of IPM offer lucrative growth opportunities to the market players.


Based on product type, the global IPM pheromone products market has beendivided into sex pheromones, aggregation pheromones, and others.The sex pheromonessegment accounted for the largest market share in 2020.Insects use sex pheromones for mate location and courtship. It is released by one sex to trigger a series of behavior patterns in the other sex of the same species to facilitate mating. These pheromones generally originate from females to attract males for mating. However, in certain insect species, the males are known to produce the sex pheromone to attract the females.


By crop type, the global IPM pheromone products market has been segmented as food crops, cash crops, plantation crops, and horticulture crops. The horticulture crops segment accounted for the largest market share of 34.80% in 2020 and is projected to register a decent CAGR of 8.56% during the forecast period.Horticultural crops include various types of vegetable fruits, medicinal, and ornamental plants. These fruits and vegetables are an important source of carbohydrates, proteins, organic acids, vitamins, and minerals for human nutrition. As a result, these crops are further processed to improve their shelf life and preserve their nutritional values.


Based on insect type, the global IPM pheromone products market has been segmented into moth, weevil, fruit fly, beetle, and others. The moth segment accounted for the largest market share in 2020.Moths are fecund invertebrates of order Lepidoptera. It is one of the most feared species of invasive pest and is responsible for many pre- and post-harvest losses in many crops across the world. 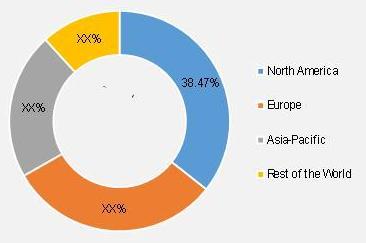 By region, the global IPM pheromone products market has been divided into North America, Europe, Asia-Pacific, South America, and the Middle East & Africa.North America accounted for the largest market share of 38.47% in 2020, and the market in Asia-Pacific is expected to register the highest CAGR of 8.89% during the forecast period. Europe was the second-largest market in 2020, projected to exhibit a CAGR of 8.57%.


North America emerged as the largest market for IPM pheromone products, with a value share of 38.47% of the global market in 2020. North America region is one of the leading producers of wheat, maize, soybean, and rapeseed globally. Growing demand for sustainable organic food products is expected to boost the IPM pheromones products in the upcoming period. Various governmental and non-governmental bodies such as the IPM Institute of North America and the University of California Statewide IPM Program actively promote wide-scale adoption of IPM systems across the US and thereby support the demand for IPM pheromones products in the region.


The Asia-Pacific market accounted for 16.80% of the global market share in 2020 and is expected to register the highest CAGR of 8.89%. The region has emerged as one of the leading producers and exporters of cereals, fruits, vegetables, and cash crops globally. Agriculture in the Asia-Pacific region is characterized by the large-scale use of chemical pesticides. However, the region is progressively shifting towards sustainable pest management practices because of growing awareness about adverse health impact caused due to excessive use of pesticides. Additionally, the adoption of strict pesticide residue norms across the world is expected to provide a major boost to the integrated pest management systems over the forecast period.

In April 2020, NovAgrica signed an agreement between the Bio-Based Industries Joint Undertaking (BBI JU) and PHERA (Pheromones for Row crop Applications). BBI JU is formed by a partnership between the EU and several of Europe's bio-based industries, which aims to help Europe meet its goals for sustainable agriculture. PHERA is an association of European companies that develops sustainable fermentation processes to produce and commercialize pheromones to safely control insect pests of soybean, maize, cotton, and other row crops.

In October 2019, Provivi, Inc. is an emerging crop protection company that completed a USD 85 million expansion for pheromones. BASF SE was one of the investors in the expansion.

“ We found the report very insightful! we found your research firm very helpful. I'm sending this email to secure our future business.

“ I am very pleased with how market segments have been defined in a relevant way for my purposes (such as "Portable Freezers & refrigerators" and "last-mile"). In general the report is well structured. Thanks very much for your efforts

“ I finalized reporting this market research result thanks to your support. I heard you already started working with Jongwon in my team. The packaging market is much more important than my project. Please support him as you always do.

“Thanks for sending the report it gives us a good global view of the Betaïne market.

“Thank you very much for your supplementary report. It would be of help for me to understand the barcode label printer market structure of US.

“This is really good guys. Excellent work on a tight deadline. I will continue to use you going forward and recommend you to others. Nice job

“Thanks ,I am so happy that we worked together.Maybe we still can work together in the future