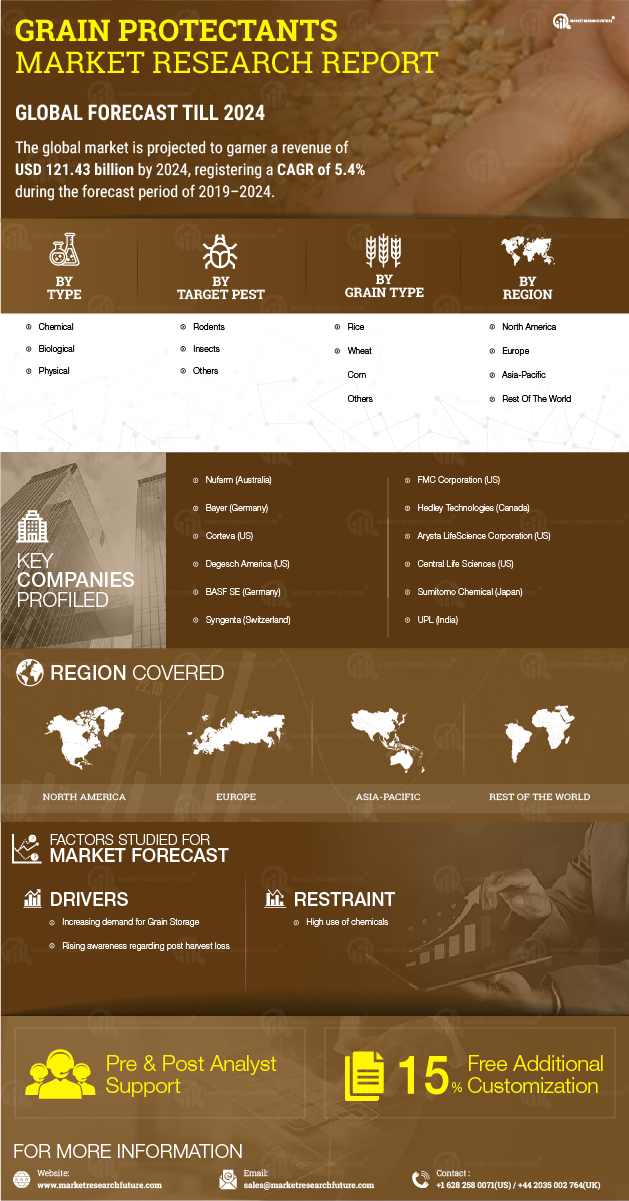 Grain Protectants Market is expected to garner revenue of USD 1.2 Billion by 2027 at a CAGR of approximately 5.31% during the forecast period of 2021–2027. The notable market growth can be attributed to the need for storing grains to overcome the impact of fluctuating market prices of grains. Farmers, traders, and stockists store their grains in warehouses until desirable market prices are received and demand for grains exceeds the supply. Another challenge faced during the storage of grains is the post-harvest loss caused during the storage due to pest infestation. To overcome such a challenge, grain protectants are widely being used to protect the grains from pest loss during storage, which, in turn, is driving the market growth of grain protectants. However, frequent usage of chemical grain protectants has led to increasing insecticide resistance in insects, thus hampering the sales of chemical insecticides and growth of market. The major challenge being faced by the market players is the availability of chemical residues used to protect the grains. The market is expected to emerge lucrative for the vendors active in the market due to the launch of innovative products that overcome the limitations of banned grain protection chemicals.

Grain Protectants industry has been segmented based on Type, Target Pest, Grain Type, and Region. By type, the global market has been classified as chemical, biological, and physical. The chemical segment is further segregated into insecticides, rodenticides, and others  The global market has also been segregated, on the basis of the target pest, into rodents, insects, and others. The insect segment has been further segmented into beetles, grain borers, weevils, and others. Based on grain type, the market is segregated into, rice, wheat, corn, and others  The global market has been studied with regard to four key regions—North America, Europe, Asia-Pacific, and the rest of the world. The North America market has further been segmented into the US, Canada, and Mexico. The Europe grain protectants market has been classified as the UK, Germany, France, Italy, Spain, and the rest of Europe. The market in Asia-Pacific has been divided into China, India, Japan, Australia and New Zealand, and the rest of Asia-Pacific. The market in the rest of the world has been segmented into South America, the Middle East, and Africa.

North America is expected to dominate the global market throughout the review period owing to the presence of numerous grain warehouses and grain processing plants. Additionally, the need to meet the standards while storing grains in warehouses is also boosting the sales of grain protectants in the region. However, the market in Asia-Pacific is expected to register the highest CAGR during the forecast period owing to the huge production of grains in the region and increasing the loss of grains during storage.

What is the expected valuation of the global grain protectants market?

What is the growth rate for the global grain protectants market?

Grain protectants market is set to accumulate revenues at 5% CAGR from 2017 to 2027.

What is the major growth driver of the global grain protectants market?

Storage of grains in silos in cases of emergencies is the major growth driver of the global grain protectants market.

What can slowdown the global grain protectants market?

Grain protectants market growth can be impeded due to lack of chemicals residues for protecting grains.

Which region can dominate the global grain protectants market?

Name the key players of the global grain protectants market.

The Global Grain Protectants Market Is Set To Register A High Cagr Owing To Growing Demand For Hi...