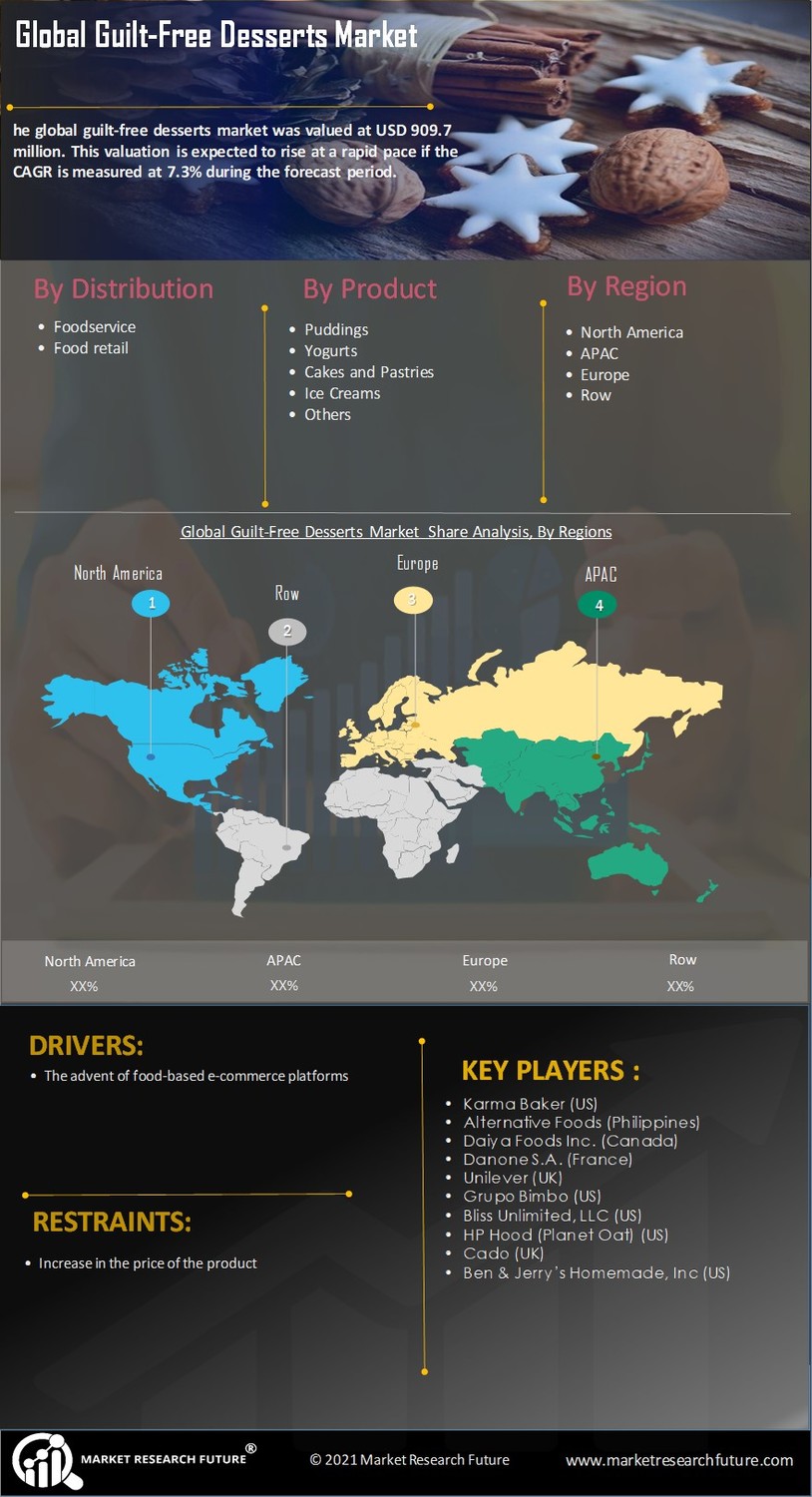 The outbreak of the COVID-19 pandemic has affected all the markets immensely. The governments of various countries imposed lockdowns which made many industries stop their work. The supply chain has been disrupted badly due to an insufficient supply of raw materials. Due to this reason, the guilt-free desserts industry has also been affected tremendously in a negative way. The manufacturers of guilt-free desserts invest a lot of money when they try to procure the ingredients. A low production capacity is the only factor that is restricting the purchase of the materials at a good price. The demand for guilt-free desserts is increasing among the people due to the various health benefits it provides. However, it is expected that the market for guilt-free desserts will witness a high growth post the COVID-19 pandemic.


There has been a sudden increase in awareness regarding the consumption of healthy foods and creating a healthy diet among the consumers. This has been a major factor which is responsible for driving the guilt-free desserts market. Another major driving force of the market is the increase in the emergence of many food-based eCommerce platforms. The enhancement of the retail sectors in different developing countries can also drive guilt-free desserts market growth during the forecast period.


The shift in the taste of the consumer preference towards nutritious and healthy foods is a major growth opportunity for the guilt-free market. Pastries and cakes are the most common types of dessert that are mostly eaten by people. Hence, this segment will remain dominant during the forecast period which in turn is a great opportunity for the guilt-free desserts market.


People prefer guilt-free desserts which will not only be healthy but also tasty. But getting two qualities in one dessert will lead to an increase in the price of the product. This high price range of such desserts makes the customers avoid these foods in spite of their various health benefits.


Due to COVID-19, the manufacturers were unable to make new products as they did not receive sufficient raw materials. The price of the raw materials has also increased which in turn has increased the price of the finished product. Hence, the manufacturers started producing fewer finished products. On the other hand, the demand for guilt-free desserts is also increasing among the customers. This disruption in the demand and supply chain has been a major challenge for the market.


There is a huge increase in the demand for sugar-free and low-calorie desserts among most people. This is the main factor which is responsible for inducing the growth of the market. The key manufacturers of the food industry are constantly going through rapid developments that can help the industry to drive the market for guilt-free desserts to grow. However, the guilt-free market is expected to witness rapid growth and reach a high valuation if the CAGR is measured at 7.3% during the forecast period.

Recently there has been a rise in the concern for a healthy and flexitarian diet among most people. The COVID-19 pandemic has increased the demand for such foods which created an opportunity for such markets to grow. The manufacturers are also trying to develop various types of dishes from plant-based products such as guilt-free chocolate cake, ice creams, etc to attract the customers towards their product which will increase the value of such markets. The vegan desserts are now overcoming the negative perceptions of the people regarding the taste and texture. These foods have got certain health benefits and a huge level of nutritional value which is extremely important for people.

The guilt-free desserts market size is segmented into two main categories which include distribution channel and product type. Here are the major segments of the market along with their sub-segments.

North America is another region which is expected to be in the second position in the guilt-free desserts market share. The Americans have shifted their preference towards flexitarian foods. This growth in the trend of vegan and vegetarian foods has led to a rise in the market for guilt-free desserts in that region.

The key players of the guilt-free desserts market are constantly trying to develop new products in order to attract customers. They are trying to enhance the quality of the desserts and trying to make them equivalent to the foods that are animal-based for the customers to switch from non-vegetarian foods to vegetarian. The companies are competing against each other to launch the best guilt-free desserts which will not only satisfy the taste preference of the customers but also will be available at an affordable cost.

There are no recent developments.

What are the key factors that are expected to drive the growth of the market?

The major driving factor of the market is the increase in the concern for health issues among many people. People are shifting their preference from non-vegetarian foods to healthy and nutritious foods. Also, the rise in the food-start-ups in developing countries has led to a certain increase in the market for guilt-free desserts. The growth in the emergence of eCommerce platforms also acts as a major driver of the market.

Which region is expected to hold the largest guilt-free dessert market share?

Europe among all the five regions is expected to hold the largest guilt-free desserts market share because it has a very strong dominance of the confectionary and bakery industry. Also, the emergence of plant-based food options among people is expected to lead the region towards growth. Countries like Germany and UK are the top countries in that region which can boost the market growth.

Which product segment is expected to dominate the global guilt-free dessert market share?

Pastries and cakes are the most common dessert options that are chosen by the people. Hence, vegan pastries and cakes will give the customers a different level of taste. However, due to the increase in demand for organic cakes and pastries, there is an increase in its dominance.