Grid Scale Battery Market is projected to be worth USD 6.5 Billion, registering a CAGR of 32% during the forecast period 2022-2030

Grid scale battery market is projected to have significant growth with a CAGR of more than 32% during the forecast period 2022-2030.

The energy stored on a huge scale within the electrical power grid is referred to as a grid-scale battery. The majority of energy management techniques are employed in bulk power management. The battery has been invented on a large scale on a commercial basis to store energy during peak periods and release it when power usage is down. The improvement of technology, growing demand for energy-efficient machinery, and energy storage's ability to offer a variety of applications are the primary drivers of the global Grid-Scale Battery Market. The fundamental problem in the Grid-Scale Battery Market is low energy and power density. The key restraints in the worldwide Grid-Scale Battery Market are battery cycle life and safety concerns.

The surge in grid-scale battery deployment has been facilitated by technological advancements that have resulted in a rapid increase in the energy density of the lithium-ion battery industry while lowering the overall cost of lithium-ion batteries. The lithium-ion battery segment is predicted to increase at the quickest rate over the forecast period due to the aforementioned causes. During the projection period, the growing focus on rural electrification via grid-scale battery deployment is likely to generate a substantial amount of opportunity for market growth.

Global Grid Scale Battery is expected to grow significantly by 2023 with a CAGR of more than 32% in the forecast period due to increase investment in renewable energy, reducing costs of grid-scale battery. Additionally, companies involved in this taking R & D very seriously to ensure better operational efficiency throughout because of growing fleet competitors in market. North America region is dominating in this market due to the increase of renewable energy in the residential sector, however initiative measures have been taken to lead the way for utility-scale policy and storage development. Solar development diving into new complementary technology area which ultimately helped in growth in Grid Scale Battery Market. 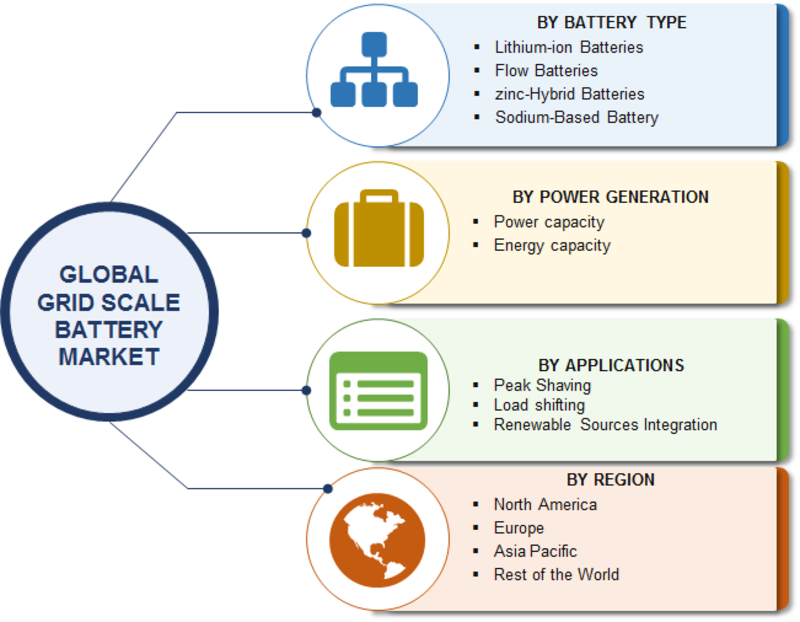 Global Grid Scale Battery Market is further segmented in three namely by battery type, by power Generation and by application. Battery type further Sub-segmented as Lithium-ion batteries, flow batteries, Zinc-hybrid batteries, Sodium-Based Battery, Lithium-ion batteries is leading as these batteries are highly use in UPS having good efficiency. Power Generation is sub segmented into Power capacity or rating, Energy capacity, Power capacity is leading in this segment. Applications are Sub-divided as peak shaving, load shifting, renewable sources Integration, Backup power is fastest growing segment as most of the companies mostly rely on battery durability and amount of power supplied when power cut-off. Region is segmented into Europe, North America, Asia Pacific, Rest of the world. North America region is dominating in Grid Scale Battery Market due to government support and industries shifting towards renewable energy.

The market’s CAGR is recorded of more than ~32%.

Name the top leading companies of the market.

What are the regions mentioned in the study?

Europe, North America, Asia Pacific, Rest of the world are the regions mentioned in the study.

When the growth of the market is stated?

The market will witness its significant growth by 2030.