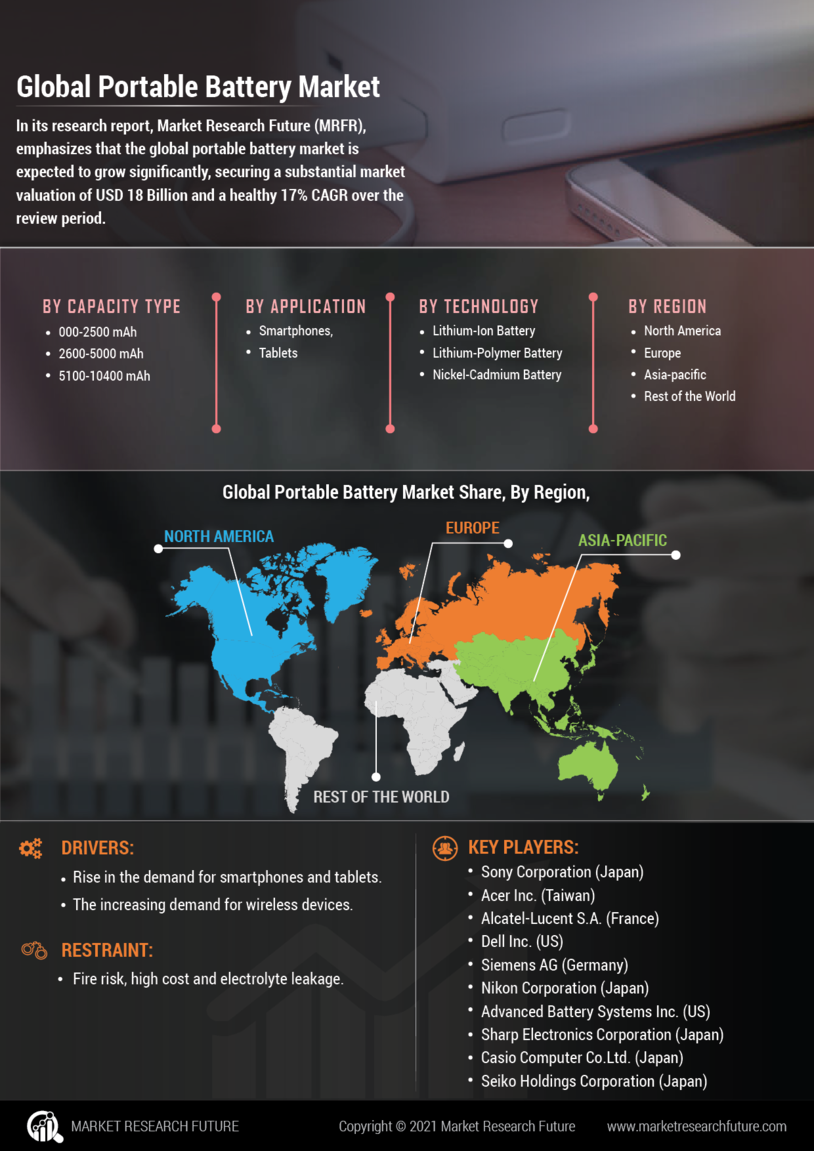 Portable Battery Market size is to reach USD 18 billion, growing at a CAGR of 14% during the forecast period

According to the latest research report, the Portable Battery Market size is predicted to reach USD 18 billion, growing at a CAGR of 14% during the forecast period. A portable battery is a gadget that can be carried in one's hand and is small in size; its designs may be customized to meet the needs of the client. The portable battery market demand is expanding in tandem with the advancement of technology goods. Mobile phones, wireless gadgets, and other charger electronic devices must be recharged on a regular basis, which has emerged as a critical element driving the development of the portable battery market in recent years. Portable batteries are widely utilized in a variety of home applications, including calculators, torches, clocks, and timepieces, amongst other things. Additionally, the increase in demand for mobile phones and tablets is boosting the usage of portable batteries, which has distinguished them as a distinct product category within the consumer electronics industry.

Portable batteries are applicable to a broad variety of forms, chemistries, sizes, and uses, as well as different sizes and shapes. When it comes to batteries, lithium-ion technology allows for more processing power while also making them thinner and smaller in size. With the downsizing of consumer devices such as tablets, laptops, and mobile phones, the development of battery technology has been closely linked to of consumer electronics. Because Li-ion batteries have a higher efficiency than conventional battery technologies such as Ni-Cd and nickel-metal hydride, they are more energy-dense than other types of batteries. The portable chargers have been constructed in such a manner that they may be taken apart with relative ease. Heavy metals such as mercury, cadmium, and lead are also present in low concentrations, which is in accordance with regulatory guidelines due to the negative impact heavy metals have on the ecosystem.

The smartphone industry has seen some manufacturing delays as well as significant changes in use habits as a result of the worldwide shutdown, which has affected customer demand. China, which is one of the world's biggest manufacturers and exporters of electrical devices, has been hit hard by the supply and shipping interruption. Disruptions in the supply chain and customer demand have also been a problem for the industry in recent years.


Some innovative techniques have evolved that will allow for the development of the next portable battery-operated Internet of Things devices which is ultimately creating opportunities for the major key players in the Portable Battery Market. Medical and consumer goods, such as hearing aids, wearables, and diagnostic monitoring patches, that need portable batteries and are quite popular include hearing aids, fitness bands, and diagnosis monitoring patches. It is necessary for the plastic and metal used in the manufacture of portable batteries to meet the requirements for chlorinated plastic, fire resistance, and the kind of metal used in the manufacture of portable batteries powered product


Inhibitors to the development of the portable battery market include factors such as fire hazards, increased price, and electrolyte leaked from the batteries themselves.


Portable batteries are widely used in a wide range of applications, including electric cars, backup power for telecommunications cell towers and data centers, as well as to run forklifts and other heavy equipment, amongst others. Furthermore, the growing popularity of mobile phones and tablets is encouraging the use of flexible batteries, which have distinguished them as standouts in the consumer electronics category. The capacity of a rechargeable battery is often measured in milliamperes per hour (mph) (mAh). In order to categorize batteries according to their capacity, they are split into many categories such as 5000mAh, 10000mAh, and so on.


According to the reports, the portable battery market may be divided into technology, capacity types, application, and region. Lithium-ion batteries, lithium-polymer batteries, nickel-cadmium batteries, and nickel-metal hydride batteries are the four technologies that are segmented. Capacity types are divided into four categories: 000-2500 mAh, 2600-5000 mAh, 5100-10400 mAh, and over 10400 mAh. Segmentation based on application: smartphones, tablets, media devices, and portable and wearable accessories are some examples.

The Portable Battery Market is segmented on the basis of technology, capacity types, application, and region. The portable battery market is expected to witness decent growth during the forecast period.


Based on the application, the Portable Battery Market is segmented into smartphones, tablets, media devices, and portable and wearable accessories.

During the projected period from 2018 to 2023, the Portable Battery Market is expected to expand at a considerable pace, according to analysts. The portable battery market is being researched in terms of geography in North America, Europe, Asia-Pacific, and the rest of the globe, among other regions. Because of the high use of cell devices and other mobile accessories in Asia-Pacific, the region dominates the worldwide highest portable battery market share. The developing economies in the area, such as India, Vietnam, Myanmar, and China, are stepping up their efforts to extend and upgrade their wireless device services infrastructures and infrastructure. Further, it is anticipated that Thailand, Singapore, and the Philippines would all contribute to the regional Portable Battery Market growth throughout the projected period. Countries such as Japan, Malaysia, and Australia are expanding their efforts to develop novel battery designs, and they are anticipated to play a significant part in the development of the Asia-Pacific battery market.

Due to the growing Portable Battery Market for high power impacts in this area, North America is projected to have significant growth over the forecast period. This is expected to positively impact the development of the worldwide portable battery industry.

A variety of tactics, including product launches, research, improvements in portable battery speed and torque, and other initiatives, are being implemented by the leading players in order to retain their market positions. Samsung SDI and Toshiba are concentrating their research and development efforts on lithium-ion battery technology. For the LiFePO4 battery, A123 Systems created a phosphate lithium-ion battery technology called LiFePO4 that has a high energy density while also extending the battery's life cycle.

August 2020, the Blad X Pro, a tablet with a 15.6-inch screen and a 3000 mAh battery, was released to positive reviews. The new Blad X Pro, which is the successor to the Gemini, which was released earlier this year, is certain to be an excellent partner for the new MacBook Pro.

What are capacities in which portable batteries are available?

Which technologies are used in portable battery?

Who are portable battery vendors?

The inclination of people towards wireless connectivity and affordable data packs are observed as key drivers for the global market of portable battery.

What is the growth scope of the global portable battery market?

The genX are highly driven by technologies that offer convenience. Thus, owing to the same, the global portable battery market is expected to expand at 17% CAGR and value at USD 18 billion by 2027.