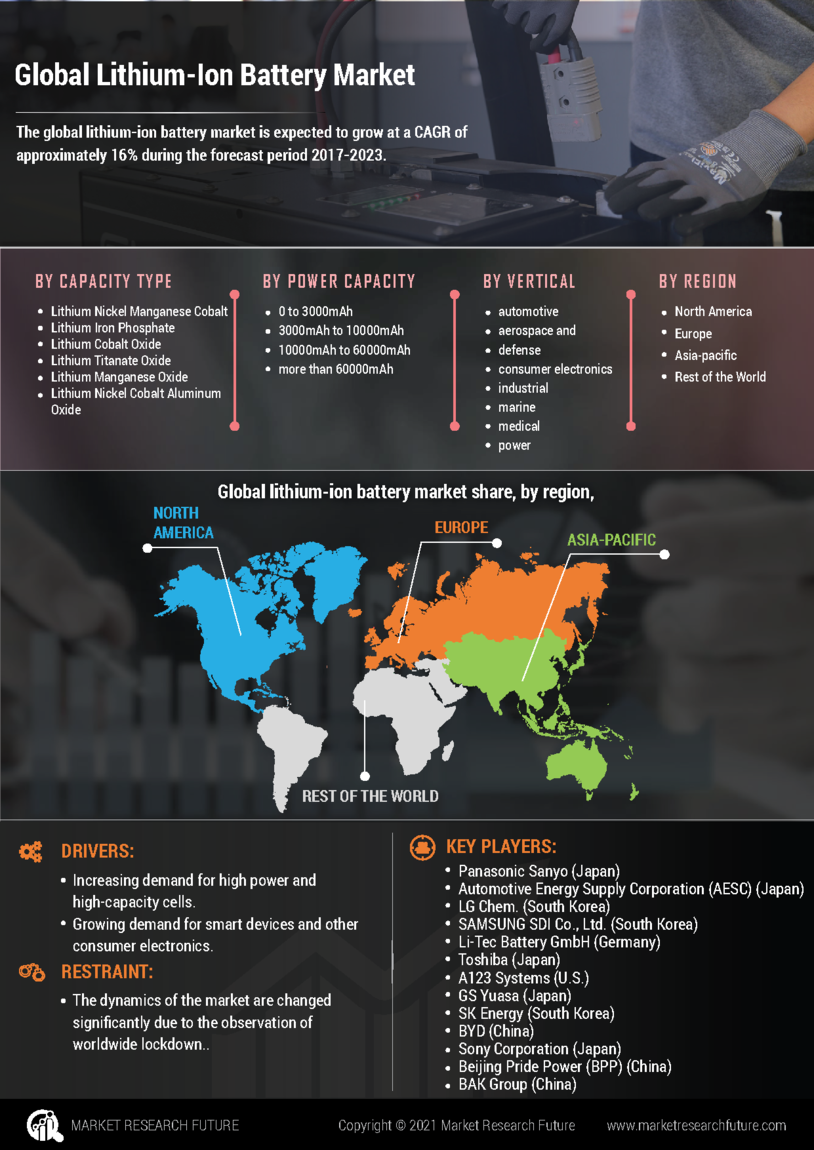 Lithium-Ion Battery Market Size was valued at USD 45.4 billion in 2021. The Lithium-Ion Battery market industry is projected to grow from USD 51.16 Billion in 2022 to USD 118.15 billion by 2030, exhibiting a compound annual growth rate (CAGR) of 4.72% during the forecast period (2022 - 2030). The demand for these goods has risen quickly across industries, primarily in the manufacturing and automotive sectors are the key market drivers enhancing market growth.

Compared to internal combustion engines, the climate effect of electric vehicles has decreased. As passenger and commercial electric vehicles change the trends for future transportation, governments worldwide are moving toward greener and pollution-free mobility, which will undoubtedly stimulate the growth of the lithium-ion battery industry. These batteries are being used in cars by electric vehicle manufacturers like Tesla. Europe has enacted stringent pollution standards, restrictions, and significant public electric mobility transit projects.

The growing interest in preserving a clean environment has fueled the development of nuclear power plants, photovoltaic installations, and wind energy projects, fueling the development of lithium-ion batteries. Additionally, the expansion is being supported by the medical industry's expanding acceptance of li-ion battery equipment.

Additionally, the EPA's restrictions on lead contamination and the ensuing environmental dangers, along with the regulations on lead-acid battery storage, disposal, and recycling, have reduced the market for lead-acid batteries and increased the need for lithium-ion batteries in automobiles. Since firms worldwide are looking to invest in Mexico, it has been the main focus of the global automobile industry. After South Korea, Japan, and Germany, it is the automobile industry's fourth-largest exporter. The need for lithium-ion batteries in the nation is predicted to increase with rising automotive production. Therefore, all these factors have enhanced the Lithium-Ion Battery market CAGR globally in recent years.

However, The rise in consumer electronics product demand implants is another factor driving the growth of the Lithium-Ion Battery market revenue.

Based on type, the Lithium-Ion Battery Market segmentation includes lithium nickel manganese cobalt, lithium manganese oxide, lithium iron phosphate, lithium cobalt oxide, lithium nickel cobalt aluminum oxide, and lithium titanate oxide. The lithium cobalt oxide segment held the majority share in 2021, contributing to around ~30% of the Lithium-Ion Battery Market revenue. Because LCO batteries have a high energy density and high level of safety, there is likely to be considerable demand for them in mobile phones, tablets, laptops, and cameras throughout the forecast period.

The Lithium-Ion Battery Market segmentation, based on capacity, includes By (0- 3000 mAh, 3000-10000 mAh, 10000-60000 mAh, 60000 mAh, and above. The 3000-10000 mAh segment dominated the market in 2021 and is projected to be the faster-growing segment during the forecast period, 2022-2030. Many industries use these batteries, including consumer electronics, electric vehicles, power equipment, and aircraft. These batteries are frequently assembled into modules and utilized in applications demanding heavy loads. A battery energy storage system with a high capacity and low power rating can run a few essential appliances while delivering a small amount of electricity over an extended period. Hence it is growing the market growth.

The Lithium-Ion Battery Market data has been bifurcated by voltage into low (below 12V), medium (below 12V-36V), and high (above 36V). The medium (below 12V-36V) segment dominated the market in 2021 and is projected to be the faster-growing segment during the forecast period, 2022-2030. These batteries are chosen over other types because they offer the best energy density and the lightest weight. They are used in deep-cycle applications, solar energy systems, maritime, military, communications, trolling motors, and electric vehicles.

The fastest-growing segment in the Lithium-Ion Battery industry is automotive. The market for electric and hybrid vehicles is anticipated to grow profitably within the anticipated time frame. In particular, in Asia Pacific, Europe, and North America, rising fossil fuel prices and growing knowledge of the advantages of battery-operated vehicles are expected to support growth.

By Region, the study provides market insights into North America, Europe, Asia-Pacific, and Rest of the World. The Asia-Pacific Lithium-Ion Battery market accounted for USD 19.61 billion in 2021 and is expected to exhibit a significant CAGR growth during the study period. Due to growing environmental concerns, China has banned traditional fossil fuel-powered scooters from all of its main cities to reduce pollution, increasing the country's e-scooter sales. The usage of tools powered by lithium-ion batteries has expanded due to Asia Pacific's ascent to prominence as a hub for global manufacturing. Moreover, the China Lithium-Ion Battery market held the largest market share, and the India Lithium-Ion Battery market was the fastest-growing market in the Asia-Pacific region

Major market players are spending a lot of money on R&D to increase their product lines, which will help the Lithium-Ion Battery market grow even more. Market participants are also taking a range of strategic initiatives to grow their worldwide footprint, with key market developments such as new product launches, contractual agreements, mergers and acquisitions, increased investments, and collaboration with other organizations. Competitors in the Lithium-Ion Battery industry must offer cost-effective items to expand and survive in an increasingly competitive and rising market environment.

Major market players are investing a lot of money in R&D to expand their product portfolios, which will spur further growth in the lithium-ion battery market. With significant market development like new product releases, contractual agreements, mergers and acquisitions, increased investments, and collaboration with other organizations, market participants are also undertaking a variety of strategic activities to expand their global presence. In order to grow and remain in a market that is becoming more and more competitive, Lithium-Ion Battery industry must provide affordable products.

Various electric and electronic goods are developed, manufactured, sold, and serviced by Panasonic Holdings Corp. (Panasonic), originally known as Panasonic Corp. Panasonic, Quasar, National, Technics, Victor, and JVC are among the brands that most of its goods are sold under. Minicomputers, telephone equipment, electric motors, chemical and solar batteries, and cathode ray tubes are examples of non-consumer goods. In February 2022, To grow its business internationally, Panasonic Holdings Corporation is establishing a production plant in western Japan's Wakayama Factory to produce new "4680" lithium-ion batteries for electric vehicles. Mass manufacturing and productivity verification are projected to start after the fiscal year 2024 has ended.

Also, Battery manufacturer LG Energy Solution, Ltd. is based in Seoul, South Korea. LGES, along with CATL, Panasonic, SK Innovation, and Samsung SDI, is one of the biggest battery manufacturers. In October 2021, A memorandum of agreement was signed by Stellantis N.V. and LG Energy Solution, a division of LG Chem that produces battery cells and modules for North America. By 2030, Stellantis N.V. hopes to have a 40% market share in the US for electric vehicles thanks to this joint venture.

May 2021: Based on their shared vision of CO2-neutral electric transportation, the commercial vehicle maker Daimler Truck AG and the lithium-ion battery producer CATL expanded their current relationship. The Mercedes-Benz eActros Longhaul battery-electric truck, which will be ready for series production in 2024, will use Li-ion battery packs from CATL as a supplier.

How much is the Lithium-Ion Battery market?

The Lithium-Ion Battery Market size was valued at USD 45.4 Billion in 2021.

What is the growth rate of the Lithium-Ion Battery market?

Which region held the largest market share in the Lithium-Ion Battery market?

Asia Pacific had the largest share in the global market

Who are the key players in the Lithium-Ion Battery market?

The Lithium Cobalt Oxide category dominated the market in 2021.

Which industry had the largest market share in the Lithium-Ion Battery market?

The Consumer Electronics had the largest share in the global market.