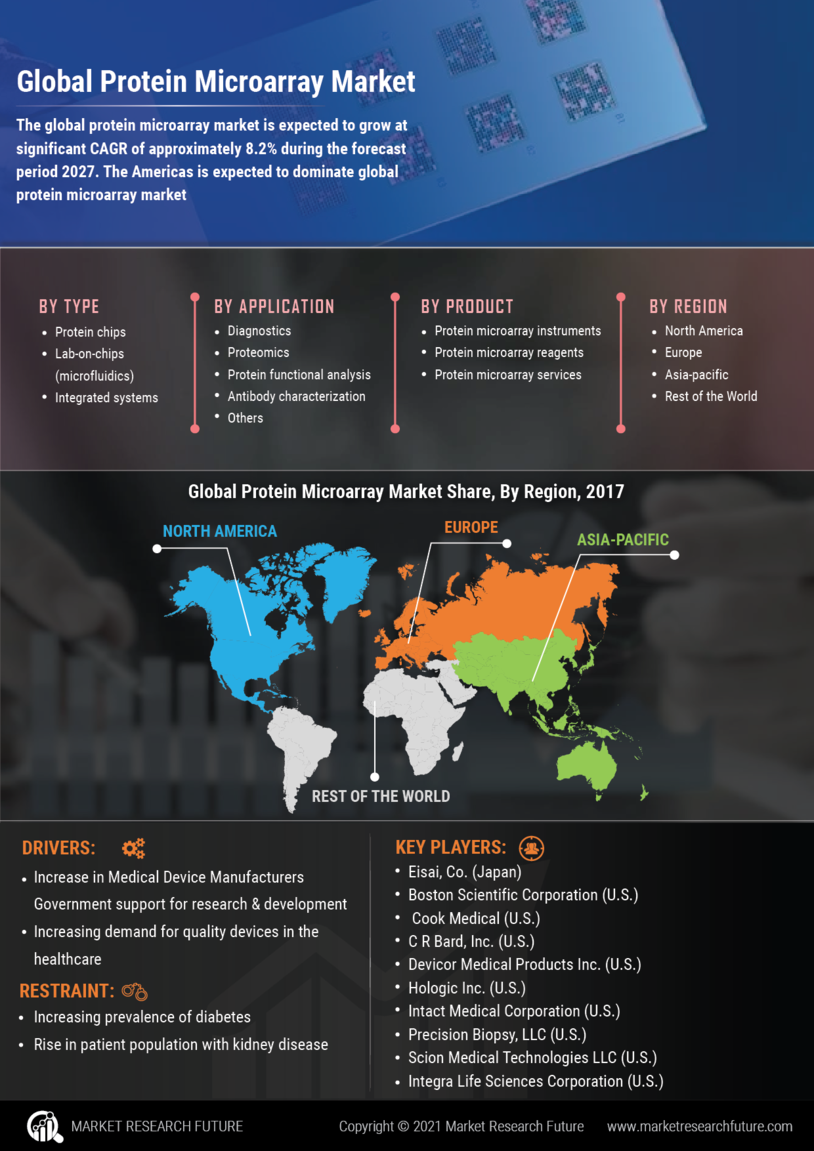 The Protein Microarray Market is expected to reach USD 6,420 Million by 2030 at 8.2% CAGR during the forecast period 2022-2030. The protein microarray is considered to be an emerging class of proteomic technology, which is a critical tool in molecular biology and biochemistry. It is also called protein chips. Moreover, it is a parallel assay and miniaturized system that includes small purified samples to distinguish various kinds of proteins.

In 2013, the protein microarray market generated over 5 billion dollars. Thus, it becomes very important to discover new drugs and new biomarkers for the proteomics instruments, testing and reagents. There are many tests available across the world for protein analysis, but microarray is considered the fastest and most efficient revenue-generating technique. However, the quantitative analysis can be enhanced with the improvement in generating high-quality antibodies and proteins. Also, it can help to promote this technology to a greater extent for other organisms.

However, the Asia Pacific market for Protein Microarray is projected to be the fastest-growing region throughout the review period because of several reasons like increasing awareness regarding personalized medicine among people, growing government funding, and rising incidence and prevalence rate of cancer in the region. According to the Protein Microarray Market Trends report, the global market is fuelled by the continuous support of the intended audiences, including protein biochip manufacturers, pharmaceutical companies, protein microarray distributors, research institutes, biotechnology companies, contract research organizations, research and consulting companies, and academic institutes.

The market has been negatively affected in the first half of 2020 because of the covid-19 outbreak. During this period, many countries governments have taken initiatives to impose lockdown and shutdowns. As a result, the supply chain and manufacturing chain of the Protein Microarray Market has been disrupted.

Therefore, the key leaders of the market have given the focus on safety measures and new product launches to propel the market growth during the research timeframe.

Chief Factors Existing In The Market


The market is driven due to several factors such as increasing awareness regarding personalized medicine among the people, The rising development of advanced and efficient diagnosis technology, and rising incidences and prevalence of cancer across the world.

Moreover, the rising government initiatives worldwide are contributing largely to the worldwide Protein Microarray Market Growth during the research period.


The market might experience challenges due to the low availability of proteins in the market during the forecast timeframe.

Moreover, the protein microarray market might experience the biggest challenges in maintaining the protein arrays in a constant condition. Usually, the proteins get changes in their microenvironment as it is highly sensitive.


The market is projected to generate significant growth opportunities due to the considerable rising investments made by different key companies across the world.

In addition, the emerging economies of countries like India, China, and others are growing the adoption of protein chips, which is predicted to create significant opportunities for the market during the analysis period.


The protein microarray market might be affected during the research period due to the declining production of reliable and consistent proteins because of the low yield across the world.

However, the rising cost of protein microarray might hinder the growth of the market in the review period.

Cumulative Evaluation of The Market

Moreover, the regions like the Middle East & Africa, North America, and Europe are expanding the growth of the Market in the forecast timeframe due to the rising adoption of protein microarrays for the purpose of diagnosis.

According to the Protein Microarray Market Outlook report, the global market has been segmented into application, technology, product, type and end-users.

These technological advances in the protein microarray propel the Protein Microarray Market Size in the review period.


In terms of the type segment, the market has been classified into lab-on-chip (microfluidics), protein chips, arrayers, integrated systems, and microarray systems.

Among all these, the microarray systems are projected to generate the largest Protein Microarray Market Share during the research period.

All these products have a significant role in the growth of the market over the forecast period.


The market has been segregated into proteomics, diagnostics, antibody characterization, and protein functional analysis based on the application segment.

The increasing application of the protein microarray is expected to enhance the market growth throughout the assessment period.


In terms of the end-user segment, the protein microarray market has been divided into research centers, clinics, hospitals, academic institutes, diagnostic centers, and others.

All the products of protein microarray are selected by the end-users based on their requirements.

According to the Protein Microarray Market Analysis report, the market consists of various regions like Asia Pacific, Europe, America, the Middle East & Africa, and the rest of the world.

Among all, the American market for Protein Microarray is registered to acquire the largest market share during the assessment timeframe. In 2017, the U.S. country projected to lead the overall market by generating the largest market revenue. In 2010, the national expenditures on cancer care were USD ~125 billion in the U.S. country, which was expected to grow to 156 billion by the end of the year 2020. As per the 2017 report of the American Cancer Society, nearly 16 88,780 new cancer cases are predicted to be diagnosed in the further coming years. The North American market for Protein Microarray is expanding due to several factors like a rise in awareness about cancer conditions, the high incidence rate of cancer, well-established healthcare infrastructure, and growth in focus on healthcare.

Competitive Intensity Within the Industry

According to the Protein Microarray Market Forecast report, the key companies are playing a crucial role in developing the market growth. These key companies include:


These companies are competing across the world to show their presence. For this, they are adopting new tactics and strategies like new product development, partnership, and merger and acquisitions. Further, they are focusing on research and developmental activities to boost the performance of the Market during the forecast period.

The market report consists of both qualitative and quantitative analysis method that includes primary and secondary research. In this report, the market segment, market overview, regional classifications, market dynamics, and recent developments have been covered.

Furthermore, the covid-19 analysis has been included in this report. In addition, this report has shown that there is significant competition among the key players.

What is the expected growth rate of the global protein microarray market?

What are major drivers of the global protein microarray market?

Awareness of personalized medicine among patients and development of advanced diagnostic services are major drivers of the global protein microarray market.

What are the trends driving the global protein microarray market?

Which region can dominate in the global protein microarray market?

The Americas is expected to dominate global protein microarray market till 2030 due to North America contributing to its revenue.

Who are the prominent players of the global protein microarray market?

Advanced Diagnosis Technology to Stimulate the Global Protein Microarray Market During the Foreca...