Fly Ash Market Information By Type Outlook (Class F and Class C), By Application Outlook (Bricks & Blocks, Portland Cement & Concrete, Road Construction, Agriculture, and Others), and By Region (North America, Europe, Asia-Pacific, and the Rest of the World)—Forecast till 2030 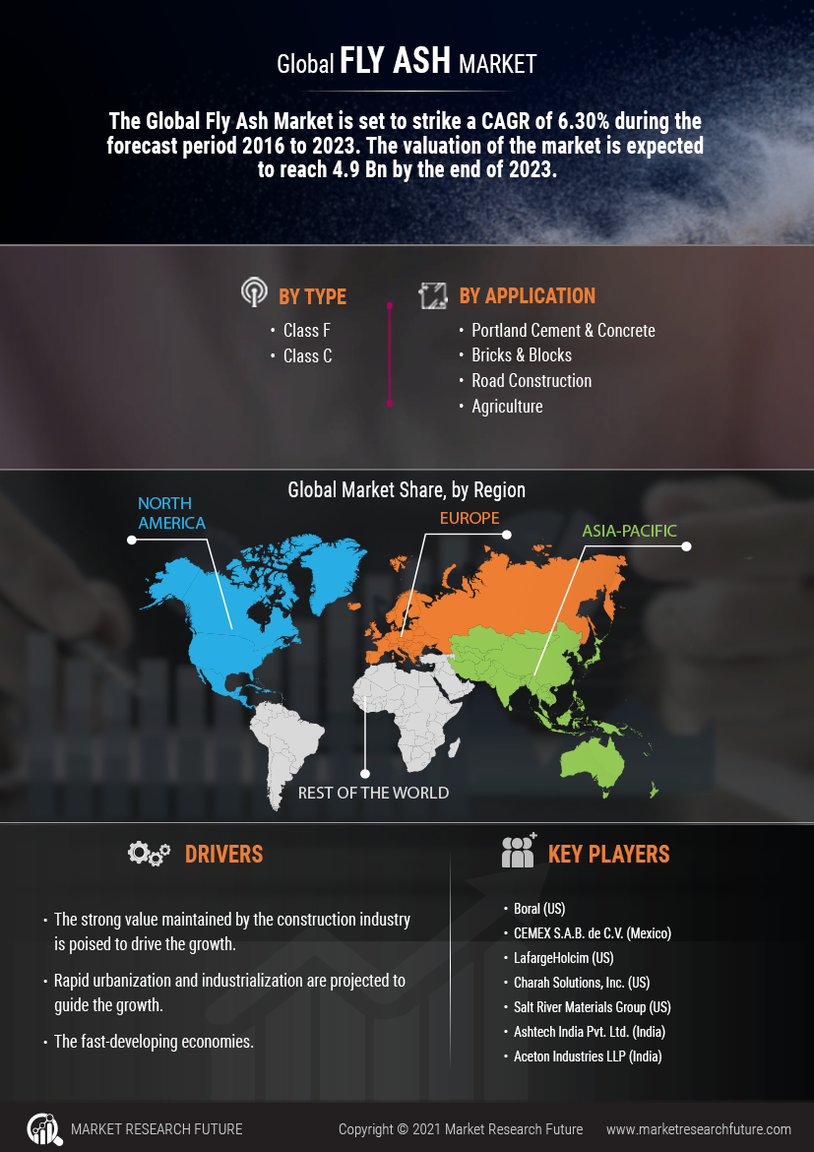 The fly ash market is projected to register a CAGR of 6.65% from 2022 to 2030. Fly ash is a fine particle byproduct of burning pulverized coal that coal-based power plants typically produce. The fly ash market size is expected to reach approximately USD 15.87 billion by 2030. The need for electrical energy is currently at an all-time high due to the exponential growth in the population. Coal-based power plants are primarily responsible for satisfying this demand, particularly in emerging nations. Due to the increased demand for coal-based plants, the fly ash generation from these units has significantly increased.

The construction industry is majorly labor-based; thus, the COVID-19 pandemic has impacted heavily on the market. The pandemic has severely impacted cement production and operations in many countries. For instance, China produced 769 million tons of cement from January to May 2020, which decreased by 8.2% annually. The operations of mining businesses were also seriously impacted. The businesses had to halt operations because of transportation limitations. The decline in crude oil demand on a  scale also impacted the market. Citizens' freedom of movement was curtailed, which decreased the demand for fuel and caused the price of crude oil to decline. It led to a fall in the consumption of oil & gas applications.

Fly ash provides nutrients to the soil and can restore the biological capabilities of deteriorated soil. With increased urbanization and industrialization over the past few years, population growth has decreased farmland area, making it imperative to boost crop productivity. It encourages the usage of fly ash in the majority of agricultural nations. The growing population is anticipated to impact infrastructure and residential construction requirements substantially. It is also anticipated that rising building investment in developing and least developed nations will support the market during the projected period.


Using fly ash as an additional cementitious component in Portland cement concrete has many advantages. It enhances the concrete's performance in fresh and hardened states. Hardened concrete aids in improving characteristics through pozzolanic and hydraulic activity, but freshly laid concrete aids in reducing water consumption and improving the paste's workability and flow. Additionally, it serves as an economical supplemental element and lowers the requirement for Portland cement in the concrete. It can be found in sufficient quantities for various applications, such as bricks and concrete mixtures.


One of the main obstacles to the market's revenue growth is the government's strict laws on landfills and air quality. Fly ash from thermal power stations using coal or lignite, which contains harmful metals including selenium, aluminum, arsenic, lead, vanadium, mercury, uranium, and thorium, among others, may harm the ground and topsoil if it is dumped. It has sparked environmental concerns, leading to the implementation of strict environmental protection legislation, which is anticipated to harm businesses involved in producing and selling these products. To avoid embankment failures and fly ash spilling into the nearby water body, the standards state that fly ash disposal should not be done within 500 meters of water bodies.


When cement is made, much carbon dioxide is released into the atmosphere. Carbon dioxide is released into the atmosphere in units of one tonne. Cement production accounts for 7% of the world's carbon dioxide emissions. Since there is a lot of this ash, using it in cement can cut carbon emissions by 25% to 30%. The goal of producing more ecologically friendly concrete by using less cement and partially replacing some cement in concrete with a by-product of other materials is expected to drive the market potential for fly ash bricks.

The fly ash market segmentation, based on type, is class F and class C. The fly ash market growth was prominently high under the class F category in 2021 due to the increasing adoption of the Portland cement product for excellent strength mixes and mass concrete. Furthermore, benefits associated with the product, including high compressive strength, increased resistance to ASR (Alkali silica reaction), decreased permeability and water demand, and less heat generation during hydration, are expected to increase its adoption and, thus, drive revenue growth of this segment.

The fly ash market segmentation, based on application, is bricks & blocks, Portland cement & concrete, road construction, agriculture, and others. In 2021, the bricks & blocks segment accounted for the largest market share of the  market. Fly ash gives bricks and blocks a significant amount of compressive strength. High-quality fly ash bricks are frequently used to build brick masonry structures and make an excellent alternative to regular clay bricks. Fly ash provides blocks with a superior mold, sharper corners, and superb gloss and texture. By reducing carbon dioxide emissions by 90%, these bricks and blocks can help preserve natural resources and enhance environmental preservation. They are becoming increasingly in demand as carbon dioxide-efficient materials, and this demand is expected to rise over the projected period. 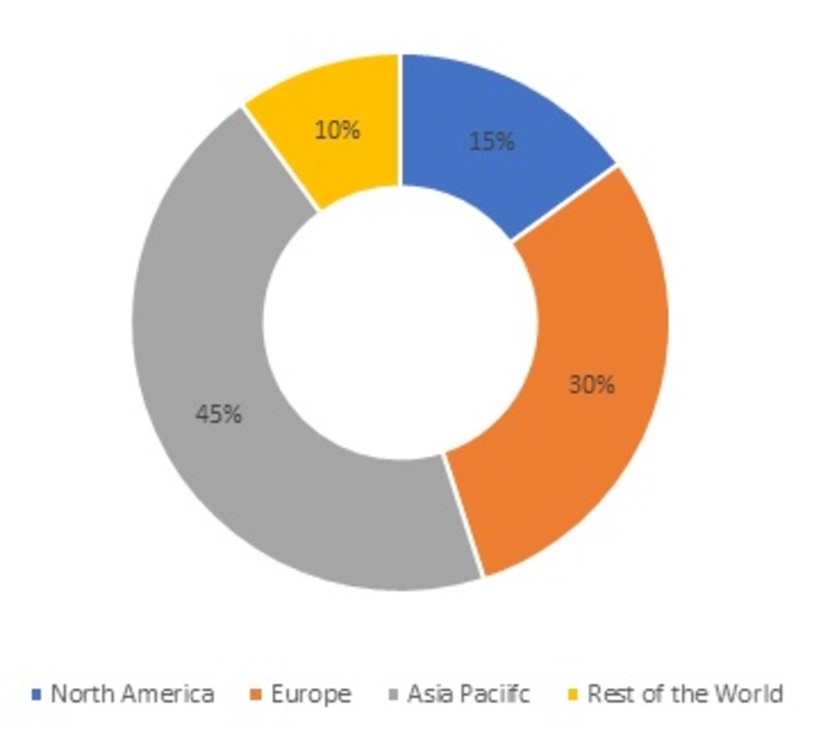 By region, the fly ash market has been divided into North America, Europe, Asia-Pacific, and the Rest of the World. Asia-Pacific accounted for the most extensive market share. North America will exhibit the highest CAGR during the forecast period.

Asia-Pacific dominated the market share in 2021. China holds the major share of the regional market, backed by higher demand from the cement market. India and China ly are the leading manufacturers of cement and cement products. The region is experiencing high demand for cement due to the rapid expansion of the building & construction industry. Additionally, both countries are major exporters of cement ly. Key factors such as changing demographics, increasing disposable income in emerging & highly populated countries, and urbanization activities are fueling the market growth.

North America accounted for the fastest growth rate in the market in 2021. Construction is one of the major sectors in the US economy, and according to the United States Census Bureau, overall expenditure of this industry was estimated at an adjusted annual rate of USD 1704.4 billion (0.5%) above in February 2022 over January 2022. The construction industry in Canada and the United States is shifting towards prefabricated building compounds. The region's key cement and concrete manufacturers are adopting automation and digitalization for prefabricated construction.

The market's competitive landscape depicts a consolidated market with the top 10 companies accounting for about 50% of the market revenue. Key players in the market have invested a considerable amount of resources in the research & development of several ash products. A product portfolio supported by superior operational efficiency and safe & novel technology development for composites application is the strategy used by the market leaders for their growth. For instance, in February, 2022, Charah Solutions, Inc. declared that it had been given a sales and marketing contract for fly ash from a western utility for the company's plant's sustainable recycling.

To identify and estimate the market size for the fly ash market report segmented by type and application by value (in US dollars). Also, to understand the consumption/ demand created by consumers of  fly ash market forecast between 2022 and 2030

To identify the fly ash market growth and infer the drivers, restraints, opportunities, and challenges.

What is the study period of the fly ash market report?

What is the fly ash market growth rate?

The market is expected to register a CAGR of ~6.650% over the next 10 years, according to  fly ash market research.

What is the expected fly ash market size by 2030?