Field-Erected Cooling Tower Market is expected to be valued at USD 3.22 Billion, with a CAGR of 4.5% Forecast by 2027

Field-erected cooling tower market is estimated to grow at ~ 4.5% CAGR during the forecast period 2022-2030, due to growing investments in industrial sector.

The global field-erected cooling tower market is expected to witness a phenomenal growth during the forecast period. The considerable growth in the power sector with population boom, along with rise in energy demand has propelled the field-erected cooling tower market in various regions. The growth is primarily credited to upgrades in utility infrastructure, growing investments in industrial sector, and related government regulations in various countries, which is likely to continue during the forecast period. The Asia Pacific region is expected to grow at the highest CAGR from 2017 to 2022, wherein China was the largest country-level market in 2016, followed by India and Japan. Upsurge in population with tremendous energy demand growth has resulted into a phenomenal growth for industrial infrastructure in the region and consequently resulted in growth of the field-erected cooling tower market.

A cooling tower is designed to extract heat from the working fluid, mostly water, to the atmosphere, and often through evaporative cooling phenomenon. Hence, the cooling tower is also termed as a heat rejection device, which propagates heat to the surroundings through the cooling of water stream to room temperature for reprocessing and revitalizing its properties and quality. The cooling tower finds its most common application in power generation, petrochemicals & oil & gas, iron & steel & metallurgy, paper mills, and other industries. 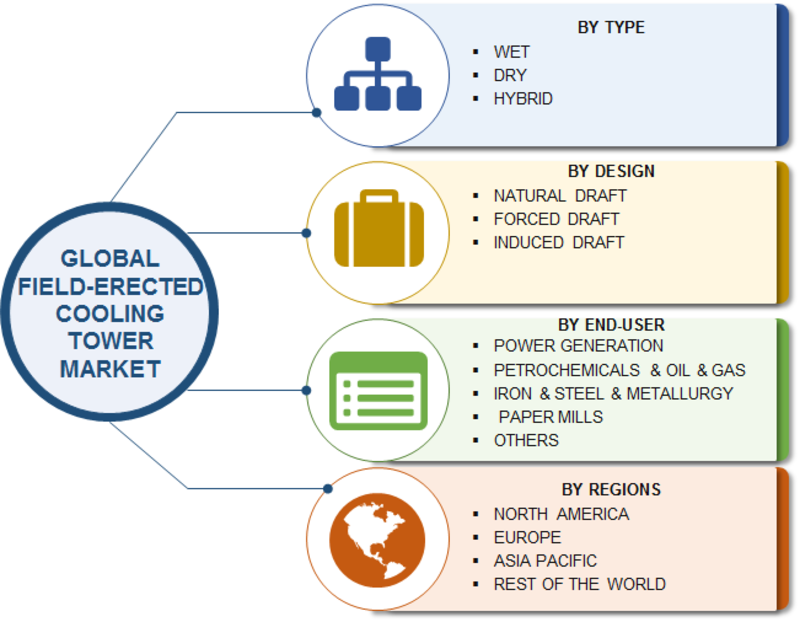 Global field-erected cooling tower market has been segmented based on type, design, end-user, and region. Based on type, the market is segmented into wet, dry, and hybrid. Among these, the wet type is projected to dominate the field-erected cooling tower market unttil 2023. Wet type cooling towers are highly favored due to easy accessibility of water as well as the high effectiveness of cooling in thermal and nuclear power plants. The advantages of a wet type cooling tower majorly consist of no requirement of mechanical or electrical components, large water loading capability, and negligible maintenance cost. Based on design, the market is segmented into natural draft, forced draft, and induced draft. Induced draft segment dominated the market in 2016 and is projected to be the fastest-growing design segment. Induced draft cooling tower has a centrally positioned fan at the top, which disperses hot air from the tower to the surrounding atmosphere. The foremost advantage of induced draft towers is that the airflow remains practically constant irrespective of the ambient atmospheric temperature. Based on the end-user, the market is segmented into power generation, petrochemicals & oil & gas, iron & steel & metallurgy, paper mills, and others. Power generation industry dominated the market in 2016 and is projected to be the fastest-growing end-user segment over the next five years. Power plants highly utilize steam to run the turbines for the generation of energy. The steam that flows through the turbine needs to be cooled for reutilization in the process to generate more electricity. Hence, a cooling tower is required to cool the water, which gets heated up during energy production.

The field-erected cooling tower market is anticipated to have a vast number of developments over the forecast period, owing to incessant technological advancements in energy sector coupled with growing power demand. The market is likely to have high expansion activities by multinational and well-established firms. Mergers and acquisitions are expected to be seen during the forecast period with several contracts and agreements between top EPC and governments across the globe.

Name the top key market players of the market.

At what CAGR Asia Pacific region will grow?

Type, design, end-user are the segments of the market.

Field-Erected Cooling Tower Market, predicted to grow at more than 4.5% by 2030