Excavators Market Information Report By Types ( Mini/Compact, Crawler/Wheeled), By End User (Contractors, Rental Providers, Others), By Application (Mining, Construction And Utility) And By Region - Forecast to 2030

Excavators are the type of equipment that can be understood as self-powered hydraulic machines. These machines are used for discharge and excavation with the help of a digging bucket at end of the two-part articulated arm. Excavators are precisely functioning as heavy construction machines, which are used in a variety of market applications such as well sinking, trench digging, and others like land leveling.

The onset of the novel coronavirus pandemic has been a huge blow to the excavators’ market share that was anticipated to grow during the forecast period that will be ending in 2028. The limitations like the implementation of lockdown followed by the rising need for employment and funds are hampering the ability of the market to grow. However, as the period commences, the global market operations are likely to commence with the ease of restrictions and hence, positive attributes are in store for the market.

The excavators market is witnessing the birth of a major degree of competition owing to the recent developments and the rising investments in the research and development department for product portfolios and innovation in the global market premises by the following market segments: 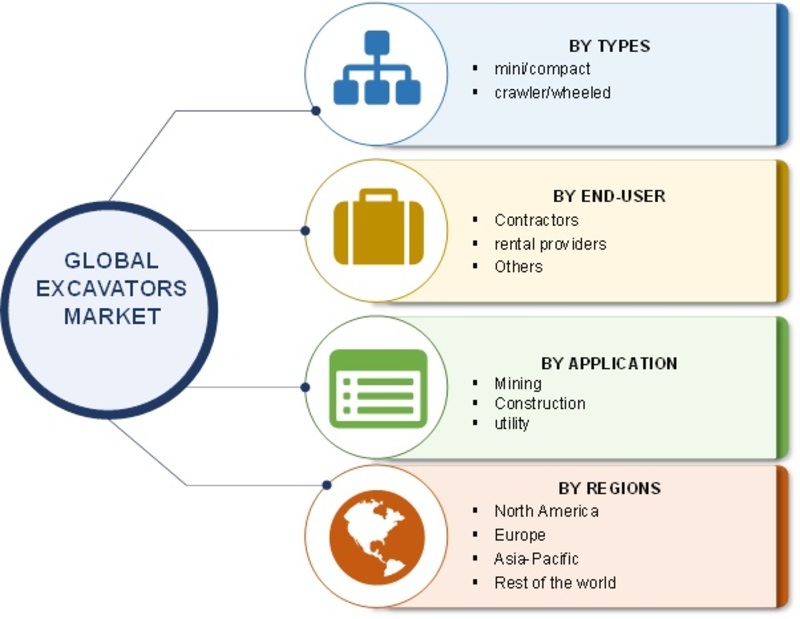 The growth of the excavators market is projected to be majorly driven by huge investments in infrastructure projects and commercial activities such as mining which have led to increased use of excavators. The rising degree of the implementation of stringent government regulations that have been rolled relating to emission control have led to the development of environment-friendly equipment, which is expected to drive the demand of the market during the forecast period that will be ending in 2028. Also, the excavators market value trends suggest that there has been a rising degree of collaboration between rental fleet owners and excavator producers and manufacturers that is also expected to drive the growth of the market as they provide excavators at very low cost which falls in the spending capacity of the market consumers and global target audience. The rise in investments is also likely to push the market size towards expansion.

The global growth of the excavators’ market share will be restrained by the rise in eminent market factors such as high maintenance costs. Also, the market is witnessing the birth of trends that support the constant need for technical support and increased emission norms. These challenges should be dissolved if the manufacturers aim to have a profit forecast for the ongoing period for the global market.

The emphasis of excavator market producers and manufacturers is growing on the wide degree of development of efficient and technologically advanced products with better control systems that are available for the global target audience. This is likely to help in making the use of excavators easier, thereby driving the growth of the market as per the projections that have been made for the forecast period that will be ending in 2028. Also, the global market is witnessing the emergence of huge funds and investments for the research and development of new products and market portfolios that will help in giving rise to technology followed by its implementation for the forecast period, thus benefitting the target audience.

Based on the power range

The excavators market has been segmented based on the power range and includes sub-segments like 0-300 Hp, 301-500 HP, followed by 501 and above HP. These segments are likely to play a major role in developing and meeting the various rising needs of the global target audience.

Based on the market end-users

The excavators market has been segmented based on the end-users and includes some like infrastructure, mining, followed by the waste management sector.

The Asian Pacific, as a part of the growing excavators market size is likely to undergo the maximum market growth during the forecast period that will be ending in 2028. The APAC region is dominating the global excavator market, and it has been led by the growth in infrastructure development and a huge degree of rising urbanization in developing nations such as China. The booming construction market in the APAC region is further expected to drive the growth of the market during the ongoing period that ends in 2028. In the European region, the excavator market share is observing a decline due to a decrease in construction expenditure and low investment in the non-residential construction and infrastructure market.

The excavators market report consists of the discussion of the extensive primary research along with the detailed analysis of qualitative and quantitative aspects by various industry experts followed by the key opinion leaders to gain the deeper insight of the market and industry performance during the forecast period that ends in 2028. The global market report helps to give a clear market picture of the current market scenario which includes historical and projected market size in terms of value, technological advancement, and the explicit governing factors in the market. The global market report provides detailed information and strategies of the top key players in the industry. The global market report also gives a broad study of the different market segments and regions on the international market scale.

Excavators are self-powered hydraulic machines used for discharge and excavation with the help of a digging bucket at the end of a two-part articulated arm. Excavators are heavy construction machinery and are used in applications such as well sinking, trench digging, and land levelling.

Major product types in the excavator market include mini/compact and crawler/wheeled.

What is the major driver for the excavators market?

The growing construction industry is likely to be a major driver for the global excavator market.

What is the leading regional excavators market?

Asia Pacific is the dominant regional market for excavators.

What are the key players in the excavators market?

Leading players in the global excavators market include Caterpillar, Xuzhou Construction Machinery Group, and Komatsu, among others.

What is the expected market CAGR?

The global market is likely to attain a global CAGR of 4.80%.